Iolo’s public swimming pool is a pop dome built in the 1970s using the Binishell method, very much loved by the citizens and celebrated in the movie Berlinguer, I Love You with Roberto Benigni. 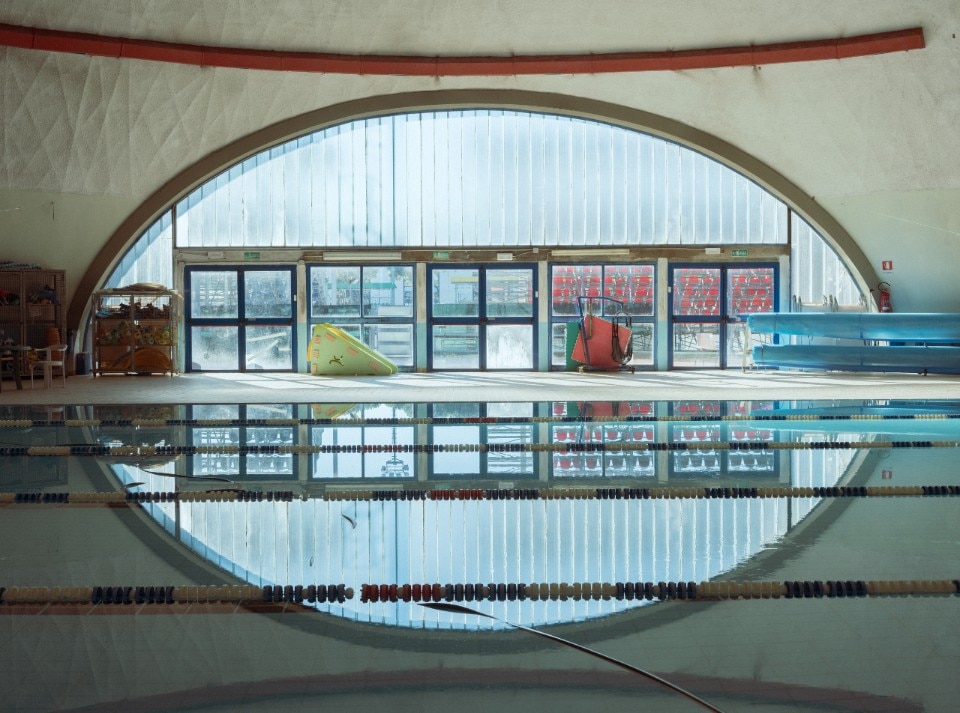 Iolo’s public swimming pool, built in 1976 by Marco Meozzi, is a major example of the application of the Binishell system, patented in the 1960s by Dante Bini.

At that time, Italy was experiencing a period of great political, social and economic turmoil. In the architecture and engineering world, research carried out in the early twentieth century on the evolution of building systems had already paved the way for a new way of understanding structures on a global scale – from Pier Luigi Nervi’s use of reinforced concrete to Felix Candela’s thin shell structures in Europe, to Buckminster Fuller’s geodesic domes in America. These experiments were the result of a natural evolution of the principles of the Modern Movement, in which the very structure of the building was emphasised as an expressive and compositional element.

It is precisely on these principles that the innovative Binishell system was based. Its invention takes us back to a cold winter evening in 1963, when Bini was playing tennis with his friend Filippo at the Giardini Margherita in Bologna. At the end of the game, the two tried to open the door of the air-supported fabric dome covering the court, but soon realised that the door was blocked by a huge amount of snow that had fallen on the structure. Yet neither of them had realised what was happening from the inside.

That episode led to Bini’s intuition that even the smallest amount of pressure could lift tons of weight, if distributed over a large membrane properly anchored to a base foundation. This is how the Binishell technique was created. This technique exploits air pressure to create spherical reinforced concrete constructions, the first application of which took place on 5 June 1964 in Crespellano, a village near Bologna.

The new construction technology was applied in twenty-three countries around the world, for more than 1600 projects. Among these, there is the public swimming pool in Iolo, in the province of Prato, designed by architect Marco Meozzi. Meozzi used the Binishell system to create a dome with a 6 cm thick membrane-shell, measuring 32 metres in diameter and covering a 25 Meter pool. The structure also includes a small grandstand for spectators, changing rooms, a first aid room and other essential services.

Read also: The history of the dome, from the Pantheon to Abu Dhabi’s Louvre

On the outside, colour plays a key role, although unfortunately today the colorful stripes have almost completely faded away. The shape of the dome itself is enhanced by the use of warm colours, such as yellow and orange, which are not used as “make-up” to cover the concrete skin of the dome, but rather as an architectural element that completes the work itself, suggested also by the title “Zebra Dome” of the article published in Domus 567 in February 1977. In fact, the texture of the building is reminiscent of a zebra’s striped coat, enhancing the expressive potential of the spherical dome.

The skilful use of colour emphasises the form and seems to resort to the principles of architecture inspired by a “pop” process typical of the art world, from the “humourous” feeling conveyed by the texture, which also recalls a circus tent, to the alienation from the surrounding area. Inside, too, we can detect architectural signs reflecting the cultural and stylistic trends of the Seventies, such as the unusually large and out-of-scale signs marking the various rooms. It is precisely the interior of this swimming pool that became the setting for some scenes of the film Berlinguer, I Love You, directed by Giuseppe Bertolucci (1977) and starring Roberto Benigni, who was born near Iolo, in Castiglion Fiorentino.

Unfortunately, like many other domes built in Italy using the Binishell system, the building is now at risk of demolition. It should be replaced by an Olympic-size swimming pool which aims to compete with the two main facilities on the peninsula, in Riccione and in Rome, and which, according to news reports, will cost 16 million euros.

This isn’t the first iconic Binishell project to come to a bad end in recent years. In the summer of 2021, the historic Pick Pack discotheque in Crespellano, near Bologna, was demolished. Over the years, this venue hosted many important Italian artists, from Lucio Dalla to Loredana Bertè and Ornella Vanoni. In the 1990s, Pick Pack was also the setting for the ‘come mai’ music video by the Italian pop duo 883, who at the time was on the crest of the wave.

As the critics and the history of architecture excluded and ignored Dante Bini for decades, despite the important contribution he made to technological and construction sciences. As a consequence, we now weep over the ruins of an architecture that seems to have no escape from the bulldozers, although many of these structures, such as the Iolo swimming pool, are still active and perfectly functioning.

Read also: 10 public pools where to dive, from Milan to São Paulo