“We preach no dogma”, Bruce Goff and the American School of Architecture

The University of Oklahoma presented an in-depth exhibition on the legacy of Bruce Goff, his innovative pedagogy and experimental architecture. 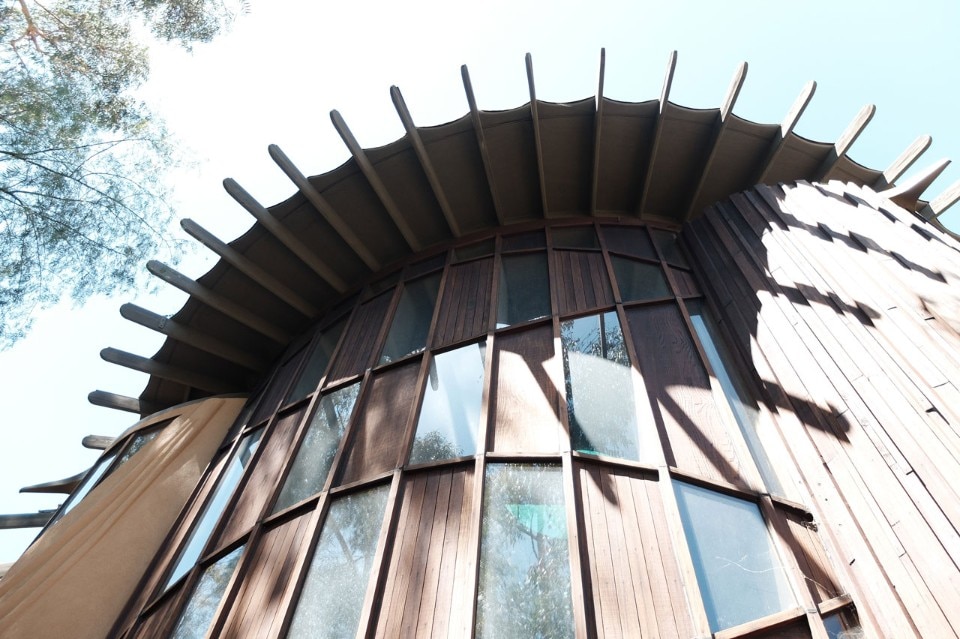 In January 1947 a new professor was hired to teach at the University of Oklahoma’s School of Architecture: his name was Bruce Goff. Hiring him was somewhat unusual, for he lacked academic credentials of any kind. Fortunately this proved to be no bar to Goff’s advancement; the University named him Chairman of the School in September that same year. In the eight years that he presided over the school before his abrupt (and controversial) resignation, he brought on board a raft of new instructors and together they effected a sea change in the way architecture was taught at Oklahoma.

The work that they and their students created during and after Goff’s tenure is explored in great detail for the first time in a new exhibition by the University of Oklahoma’s Fred Jones Jr. Museum of Art and the Christopher C. Gibbs College of Architecture, entitled “Renegades: Bruce Goff and the American School of Architecture”, curated by Luca Guido with an installation designed by Michael Hoffner. The exhibit – now closed due to the Coronavirus outbreak – featured over 150 items, including 80 original drawings, several purpose-built models, and a virtual reality experience developed by Skyline Ink of Oklahoma City. The exhibit design, impressively executed in honeycomb cardboard, was inspired by the spiral form of Goff’s recently demolished Bavinger House in Norman, Oklahoma.

By 1947, Goff had established a firm reputation for innovative and experimental architecture; the University of Oklahoma’s Architecture School had not. As a latecomer among American architecture schools, founded in 1929, it followed a Beaux-Arts curriculum which gradually evolved into Bauhaus-inspired Modernism in the thirties and forties. This embryonic period in the school’s history is the subject of the first of three sections in the exhibit. A handsome Gothic Revival church project (1935) by Robert Vahlberg and a Classically composed “Frontispiece” for a School publication of 1936 illustrate the historicist tendencies of this period.

This section is quickly followed by the most extensive part of the exhibit, which is devoted to Bruce Goff’s pedagogy at the School and the work it produced. The School’s unique approach to design is reflected in a pamphlet published by the National Association of Students of Architecture in 1956-1957; unlike the two-page spreads from other architecture schools, Oklahoma’s contribution literally inverts the image by presenting white features on a black background. Goff famously stated that “We preach no dogma,” and the selection of projects on display amply proves his point.

Especially noteworthy are the fourth-year projects from Goff’s own studio course, ARCH 273, which form an impressive lineup of beautifully rendered drawings. These projects derive from the students’ own interpretations of abstract qualities, so they naturally lack any written programs with attached lists of functional requirements. Yet throughout the exhibit the preponderance of perspective drawings is paralleled by a surprising lack of plans, the usual staples of architecture school projects old and new. The exceptions are two fifth-year projects, including Ernest Burden’s 1957 project for An Architect’s Office, which are accompanied by working drawings reprinted as blueprints.

The third part of the exhibit focuses on the built legacy of the movement created by Goff and his followers: the works of Robert Faust, Herb Greene, Blaine Imel, and Takenobu Mohri are prominent among them. Featuring structures located primarily in Oklahoma and on the West Coast, this section details the spread of the idiosyncratic designs of the “American School” across the country. Most of these structures are single-family residences designed for highly engaged clients; only a few represent larger building types.

This begs the question of why this architecture of personal invention and exquisite forms did not spread more widely or last longer than it did. Certainly the experimental nature of the building materials (Goff was known for using leftover industrial materials like the oil field drill stem that formed the spine of the Bavinger House, and Quonset hut ribs for the frame of the Ford House in Aurora, Illinois) did not help with matters of maintenance and preservation.

Despite a good deal of positive publicity in the popular press of the 1950s, the works of this “American School” never became a nationwide success. It is tempting to reach back into history for an explanation, and perhaps one may be found in Thomas Tallmadge’s The Story of Architecture in America (1927). In a chapter entitled “Louis Sullivan and the Lost Cause,” this Chicago architect wrote a sympathetic lament for the demise of another “American School” of architecture: “It had the message, it had the enthusiasm, it had the leaders; but the “breaks” were all against it.” It seems clear that the “renegades” of the University of Oklahoma faced similar challenges, and, as shown in this attractive show, they made a mighty effort to meet them.

Renegades was originally set to run through 5 April 2020 at the Fred Jones, Jr. Museum of Art in Norman, Oklahoma; alas, due to regulations put in place to combat the spread of the Coronavirus, the Museum closed to the public on 16 March. No further information is available at this time.