Rural Urban Framework has conceived a bulding that is an hybrid of a house and a ger, a traditional Mongolian portable structure. 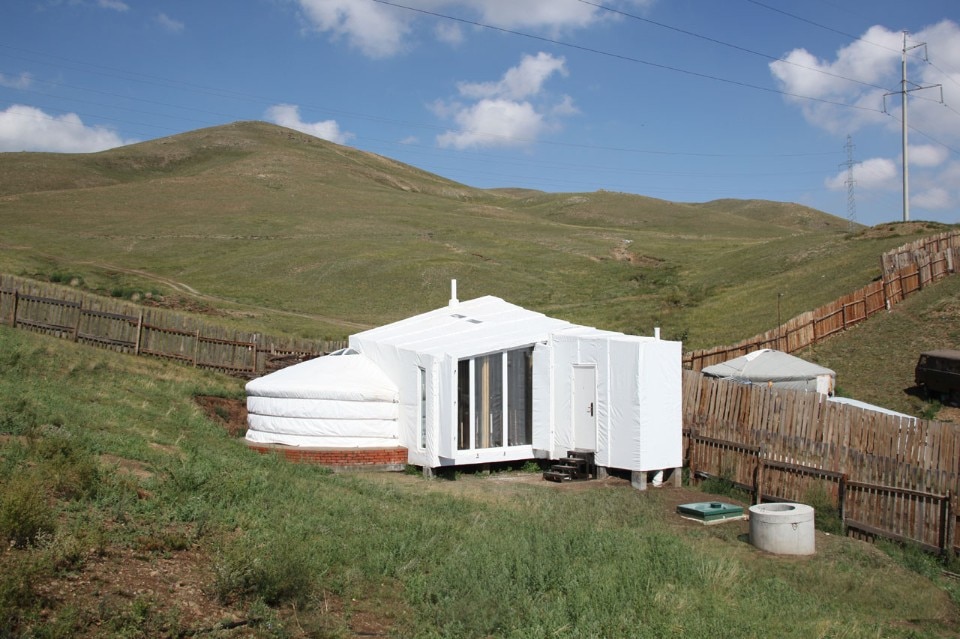 Designed by Rural Urban Framework, Ger Plug-In is a traditional Mongolian building, a portable structure made of timber, felt and canvas. It is located on the edge of Bayankhoshur, one of Ulaanbaatar’s ger districts – sprawling settlements comprised of a mixture of gers and low-cost detached homes. It is estimated that over 700,000 people live in the ger districts, accounting for over 60% of the city’s population.  The numbers are constantly growing with new migrants moving from the countryside to the city daily. It is likely the only city in the world where the poorest people own the majority of the land. The city has expensive new development plans to bring services and apartments to the residents of the ger districts. However, they do not reach the fringe areas where Zulaa and Urangua live. The project tackles the problem from the basic unit of habitation – the one thing that all residents own – the ger itself.

Bayankhoshur, one of Ulaanbaatar’s ger districts, is a sprawling settlements comprised of a mixture of gers and low-cost detached homes
01 / 12
Share
Pin it

The Ger Plug-In is conceived as being in-between a ger and a house. Designed for adaptation and growth with embedded environmental systems, the aim is to “seed” a transformation process that can lead to the creation of off-grid infrastructural networks. The Ger Plug-in is designed as a thickened infrastructural wall containing water and septic tanks and heating systems that the ger plugs into. By hybridising the ger with essential infrastructure, it provides a new form of urbanism. Rather than accepting generic forms of brick houses, so typical in developing regions, the project creates a new typology of affordable housing.