The fold and the shadow

Conservatoire Darius Milhaud designed by Japanese architect Kengo Kuma in Aix-en-Provence, is a monumental building using folded aluminum panels in the façade to emphasize the changing shadows during the day on the surface. 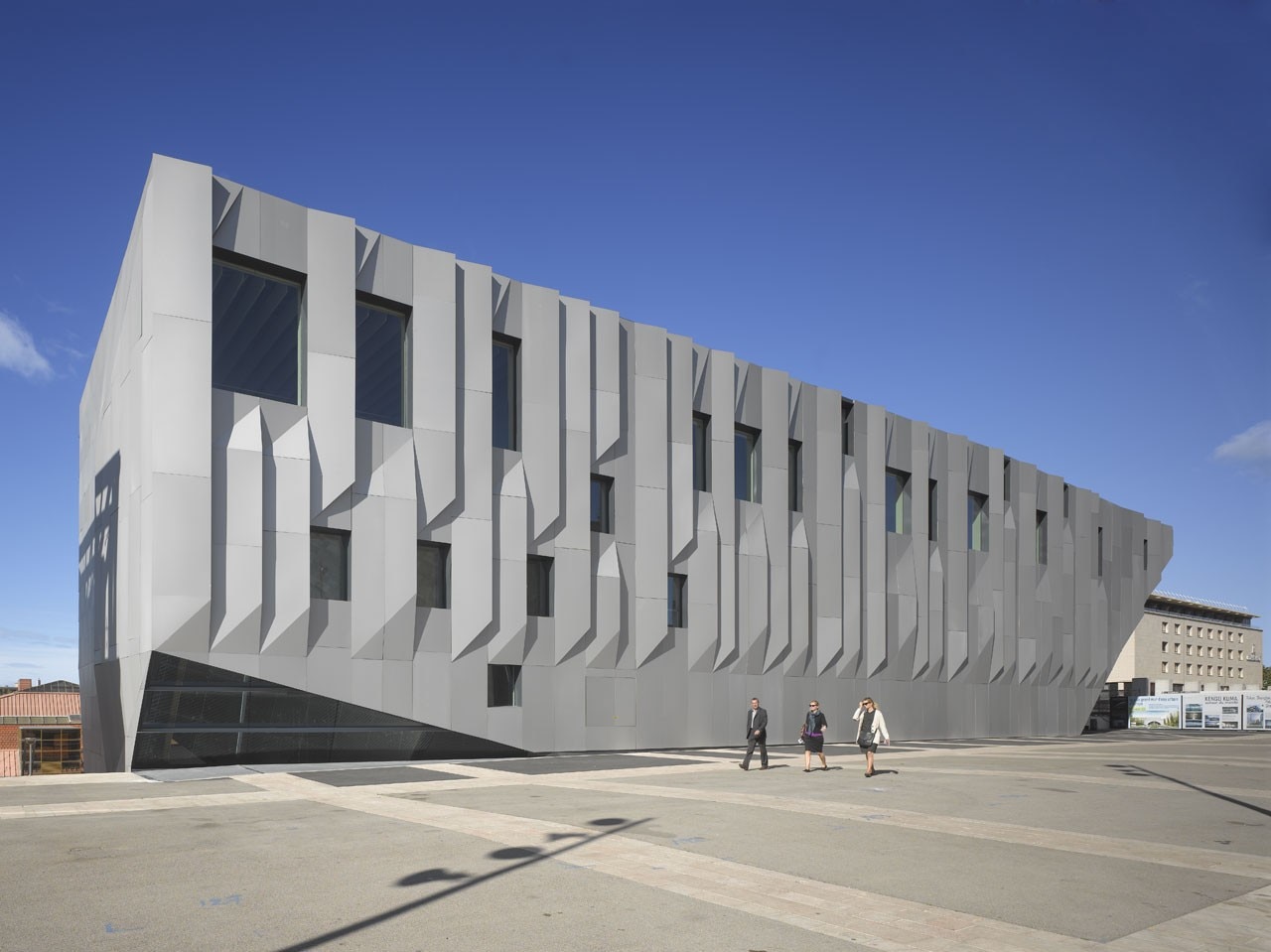 Home of post-impressionist Paul Cézanne and his painting studio more than 150 years ago, the city of Aix-en-Provence in the region of Provence-Alpes-Côte d’Azur in the south of France, combines the classic configuration of a compact medieval city with the vibrant environment of a contemporary mid-size European city.
It is also home for the Fondation Vasarely, which the artist himself financed and designed during mid 70’s, and more recently of other architectural icons as the Pavilion Noir by architect Rudy Ricciotti completed in 2006. The most recent architectural legacy in the city, just next to the building of Riciotti, is the Conservatoire Darius Milhaud designed by Japanese architect Kengo Kuma chosen through a competition.
Japanese and French culture have experience an intense mutual attraction since the very first time they encountered each other, maybe by the time when the world ‘Japonisme’ was coined in 1872 by French author and collector Philippe Burty to define the arts of Japan. More than soon the influence of Boudelaire’s poems was felt in Japanese writers as much as the influence of Ukiyo-e (Japanese wooden block prints) was reflected in the work of James Tissot and impressionists as Degas, van Gogh and Monet.

Recently Kengo Kuma has completed some buildings in France, such as the FRAC in Marseille or the Besançon Art Center and Cité de la Musique, both in 2012. However his approach for this project has responded very different to the context of a Aix-en-Provence, with a more monumental building using folded aluminum panels in the façade to emphasize the changing shadows during the day on the surface.

The concept of folding reminds us philosopher Gilles Deleuze who, also influenced by Japanese tradition, described the cosmos as “an origami universe”, unfolding and folding endlessly upon itself. While for the French philosopher it can be understood as a metaphorical operation, Kuma has interpreted with subtle sensibility the concepts of the fold and the shadow rather as a refined technique. We interviewed him in order to discuss more about his project in Aix-en-Provence.

Rafael A. Balboa e Ilze Paklone: This project is set in a very solid context, where medieval tradition and contemporary mid-size European lifestyle exist at the same time. How did you responded to these urban conditions?

Kengo Kuma: The site is some kind of border or edge of the old Aix-en-Provence city. I wanted to reflect the context of the old city. The design is based on the typical old city’s building, the box with punched windows. We found that this kind of design can fit the program of the music conservatory, including its 500 seat concert hall and various other facilities. On the other hand, the building is facing to the outside of the city. As a response to the natural environment around, we tried to find some reasons for the design from the surrounding nature. I found them in Mount St.Victoire, the mountain of Paul Cézanne. He was living in Aix-en-Provence and left many paintings of St.Victoire. Cézanne found some rhythm and geometry in the repeating shadows from natural pleats of the mountain. The design is also inspired by Cézanne geometries. We also found that the rhythm of the lines and punched windows are similar to the notes of music.

Rafael A. Balboa e Ilze Paklone: Your practice has expanded internationally, and now you are designing many projects not only in Japan but abroad. What kind of differences you have experienced when dealing with these kind projects, as in France in this case?

Kengo Kuma: For every project I try to find the essence of the place. It is not coming from the existing city, which is repeating the boxes of traditional buildings in itself. For every culture I try to find the basic characteristics of the place, something beneath the physical existence of the place and buildings. In this sense, we are not traditional architects, who study only about the surface of the buildings. In Aix-en-Provence the most important thing is the environment. St.Victoire is probably the most beautiful mountain of that area. The essence of the place here is in the beauty of the light and shadow and in the sense of rhythm. We also found there an aluminum factory. Aluminum is the best material to design a beautiful effect of light and shadow.

Rafael A. Balboa e Ilze Paklone: In traditional Japanese architecture there is no culture of monuments as in Europe. In this case, we read that this building stands to be more monumental than other projects. From your manifesto of Anti-Object, how do you see your process and architecture at this point?

Kengo Kuma: People can probably catch some monumentality in this building. At the same time this is not an independent monument. It is defining the edge of the city. In Japan, the role of the building is a kind of border, which define the exterior and interior. Only temples and shrines are working as monuments. The building as borders is a very Japanese idea. Ise Shrine is a typical example of the kairō (covered corridor that designate the boundary of the sacred area in a Buddhist temple), with three layers of kairō defining the space itself. The L-shaped configuration of our building is defining a courtyard and protecting it from the city. The building becomes a kind of border, which define the place. Here, it is an example of L-shaped kairō.

Rafael A. Balboa e Ilze Paklone: There has been since long a mutual attraction and resonance between French and Japanese culture. Being a Japanese architect building in France, what kind of Japanese concepts or values you have brought in this building? Is there any technique you wanted to incorporate maybe?

Kengo Kuma: The protagonist of this project is the black shadow. The shape is not so important. This is very Japanese. For Junichiro Tanizaki (In Praise of Shadows) the shadow is the most important of design, and I designed the shadow. The shadow is also inviting people to the interior, to the concert hall. The most difficult thing was folding 4mm-thick aluminum panel. We tried to minimize the joint. If the joint is visible, the shadow cannot be the protagonist..