A visionary project at the Venice Biennale on the “shifting border” of the shrinking Alpine glaciers portrays changing lands and the fragile balance of their ecosystem. 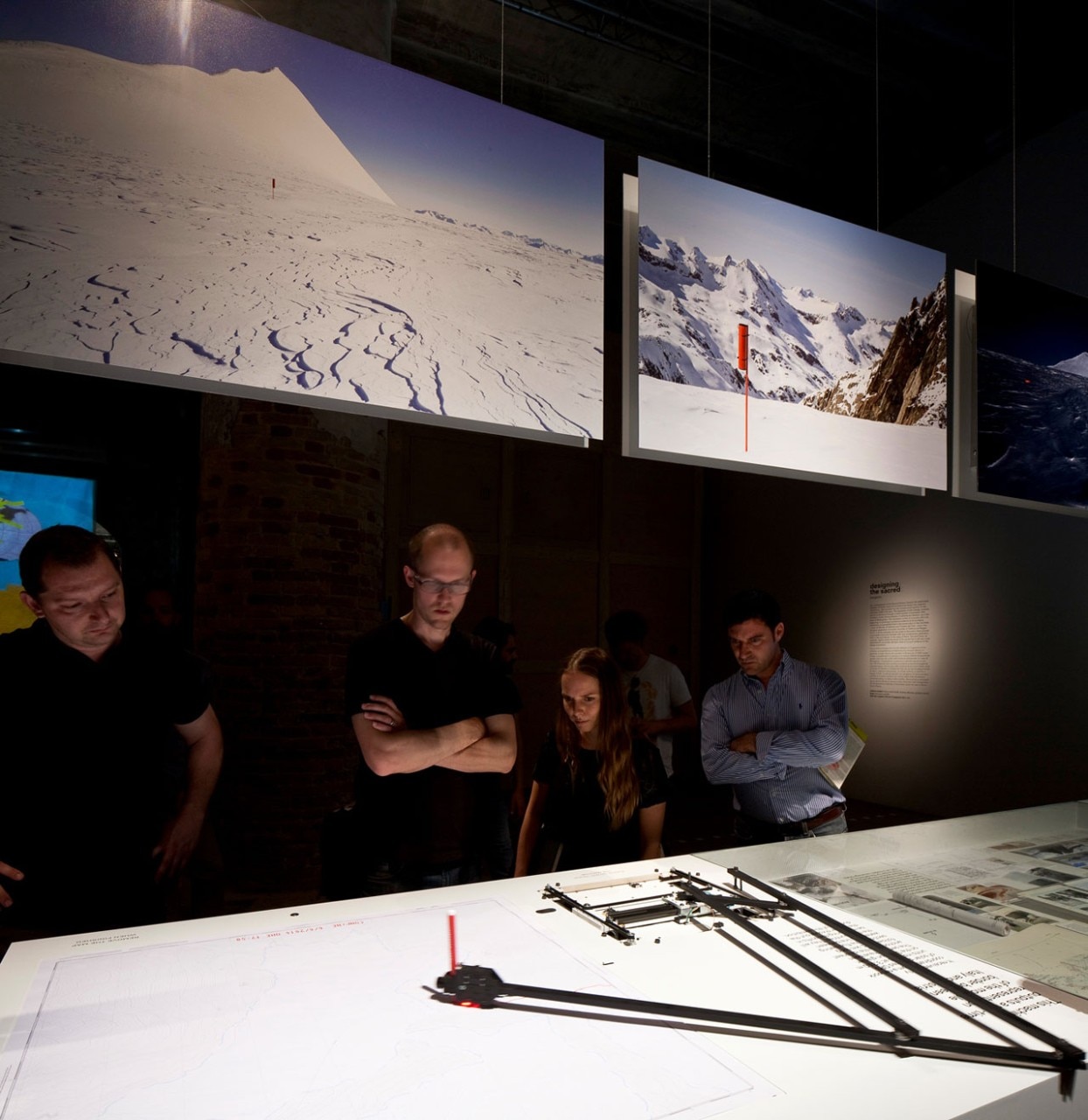 What is a border between two places, especially in the case of the fine line of the limes running through the perpetual Alpine glaciers which – thanks to global warming – are melting before our very eyes, placing the entire ecosystem at risk? This is the focus of the geo-poetic “Italian Limes” installation brought by Marco Ferrari and Elisa Pasqual, founders of Folder, to the 14th Venice Architecture Biennale.

“Italian Limes” is a more philosophical than geographic, environmental or even legal reflection on what border really means today when a United Europe has weakened (if not erased) the concept of borders between countries. It has not, however, eliminated the numerous visible signs – approximately 8000 boundary stones and metal plaques – that remain the silent testimony to these borders.

This was the starting point for Ferrari and Pasqual along with their team: the borders traced in the 1920s by the Istituto Geografico Militare (IGM); the old late-19th century technology of photogrammetry used to map areas; and the natural frontier of the Alps which, with ridges and watersheds, draw a line that unites Italy to (or separates it from?) the rest of Europe. A border almost 2,000 km long that the Italian government recently had to legally redraw with its neighbouring states – France, Switzerland and Austria – introducing the concept of “shifting border”.

Subversive and uncertain, this new limes shifts at the same speed as the accelerating shrinkage of the glaciers and hand in hand with ever more precise measuring thanks to increasingly sophisticated technology.

Folder developed the idea of a research and monitoring project that would portray the fragility and mutability of a section of the Alpine border in real time. They chose a small area belonging to Italy and Austria: the Similaun perpetual glacier, at the end of Val Senales in Alto Adige. On 4 May 2014, the Folder team accompanied by a mountain guide climbed to the glacier at a height of 3,300 m and installed five solar-powered GPS units, anchored in the snow at intervals of 200 m along a 1 km stretch of the border. The GPS sensors – with a casing self-produced in Turin’s FabLab – are linked by satellite to a pantograph installed at the Arsenale, which can graphically reproduce, hour by hour, the shift in the border prompted by the glacier’s movement and shrinkage on a local map. The natural border becomes visibly mobile in the wake the ecological and environmental processes underway.
The “Italian Limes” installation and design at the Biennale clearly sum up the four phases of a work that condenses several levels and interpretations: two border lines are projected onto a 3D model of the glacier: one traced in 1920 by the IGM and the more recent 2012 one, the line of which has shifted from the historical border by up to a few hundred metres at some points. A pantograph developed with Pietro Leoni and linked to the GPS sensors on the glacier traces the border on a pile of maps, slightly shifted each time.
A fascinating archive section then exhibits Istituto Geografico Militare material and equipment dating from the 1920s on for the very first time. Finally, splendid photographs by Delfino Sisto Legnani record last May’s expedition. The monitoring of the glacier and its changing limes will last throughout the summer of 2014. Although this will certainly not put a halt to the dangerous process of shrinking glaciers, it will try to raise awareness and focus on the issue of the phenomenon’s huge environmental impact.

A far from conventional local project – which received a Special Mention from the Biennale – the Folder exhibition highlights new points of view, prompting inevitable questions on the future of the planet with a gaze that is both free and original.
Italian Limes is a project by Folder (Marco Ferrari, Elisa Pasqual) with Pietro Leoni (interaction design), Delfino Sisto Legnani (photography), Dawid Górny, Alex Rothera, Angelo Semeraro (projection mapping), Alessandro Mason (production), Claudia Mainardi.
© all rights reserved