The pavilion curated by FAT and Crimson is an examination of the origins of British modernity, from William Blake’s poem Jerusalem to New Towns such as Thamesmead, that Stanley Kubrick made the backdrop for A Clockwork Orange. 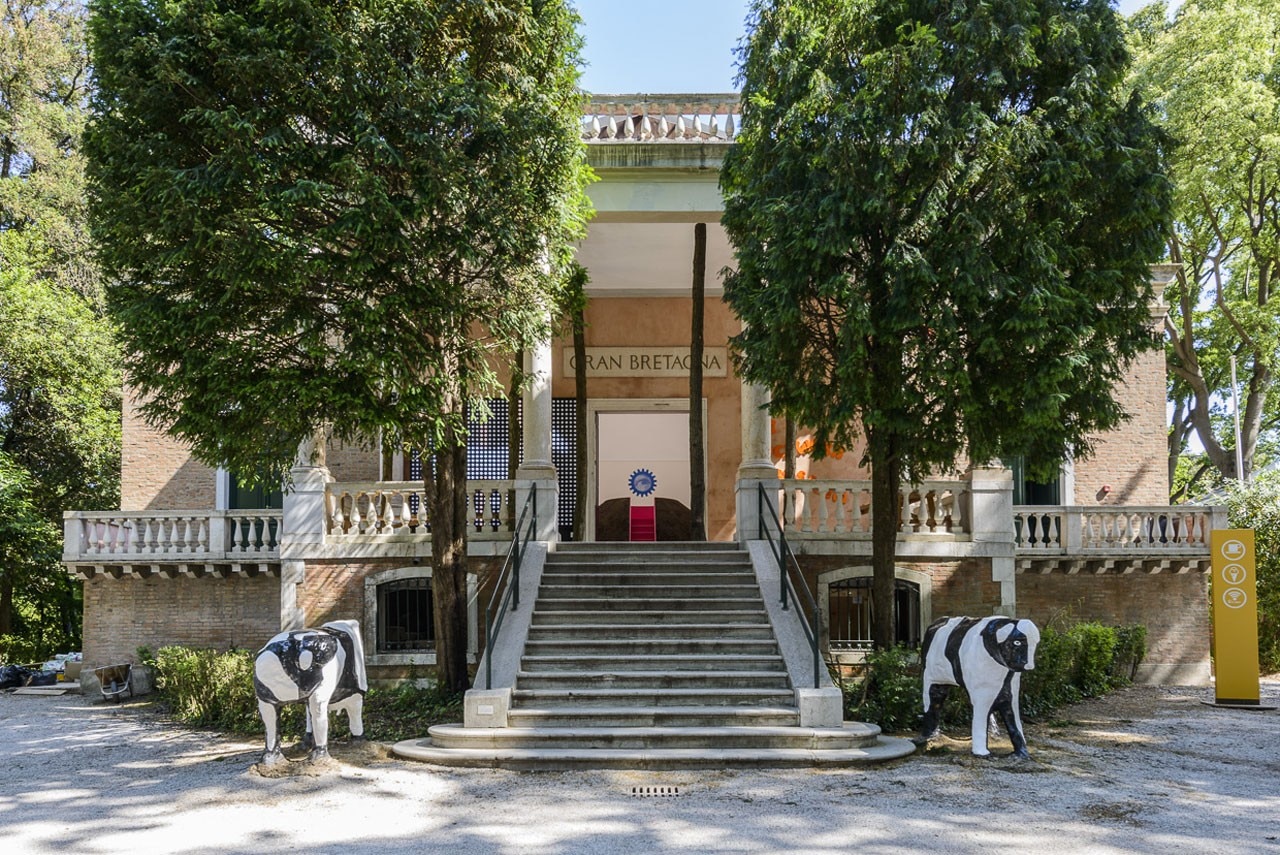 There’s a surprising amount of Cliff Richard in the British pavilion at this year’s Venice Architecture Biennale. The perma-tanned singer features in nearly every room of the neo-classical villa, his face appearing on a variety of pop paraphernalia that all take the icons of post-war British modernism as their architectural backdrop.
Cliff is one of the more unusual stars of “A Clockwork Jerusalem”, the British contribution to “Absorbing Modernity: 1914-2014”, Rem Koolhaas’s theme for the national pavilions at this year’s Biennale. As with its international neighbours it corresponds to Koolhaas’s dual aim to both research architecture’s past rather than showcase its present and to emphasise architecture rather than architects.
Directed by British Council, the exhibition is a collaboration between Crimson Architectural Historians, the Dutch research collective established in the 1990s and FAT, the London-based studio founded in the same decade by Sam Jacob, Sean Griffiths and Charles Holland. “A Clockwork Jerusalem” is FAT’s last hurrah, following the announcement at the end of last year that the studio was disbanding.

Their curatorial response is summed up in the exhibition’s title. This is an examination of the origins of British modernity, starting from William Blake’s 18th century poem Jerusalem, and how it led to the modernism of post-war Britain; to New Towns such as Thamesmead, the London estate that Stanley Kubrick made the backdrop for A Clockwork Orange, his 1971 adaptation of Anthony Burgess’s 1962 novel. The result is a particularly British affair, full of the wry humour and eclecticism typical of FAT, a studio well known for its playful, postmodern approach.

Amongst the themes that emerge in the exhibition is the persistent presence of the countryside in British modernism. Flanking the stairs outside are two concrete cows on loan from Milton Keynes, Britain’s last New Town. In the portico is a LED white horse, a digital version of the Neolithic carvings scattered across the British rural landscape described here as a form of “Electric Picturesque”, one of several neologisms the curators have devised for the exhibition.

This combination of the pastoral and the urban continues inside; in the central gallery you’re greeted by a large conical earth mound, an amalgamation of multiple architectural episodes, from ancient Burial mounds to demolished slums. Surrounding it is a panorama that interweaves the visions and visionaries that populate the rest of the exhibition. Cliff is here, and Blake too, alongside ancient ruins, Georgian Terraces and Brutalist tower blocks.
This imagery is repeated in the rest of the rooms, which continue to make use of neologisms, historical jumps and leaps between high and low culture to tell the story of the origins and outcomes of British modernism. The first two rooms, ‘Utopia of Ruins’ and ‘Historico Futurism’, provide some of the most arresting exhibits; from Joseph Gandy’s remarkable 1789 illustration of Sir John Soane's Rotunda of the Bank of England, depicted as a ruin before it had even been built, to Inigo Jones’ 17th century declaration of the ‘vulgarity’ of Stonehenge. Here, as throughout the exhibition, the past is a persistent presence. It is a reminder that modernism did not appear out of nowhere but instead was the next chapter in a long history of visionary thinking; the shape it took in the twentieth century dependent on this long past and local environs.

Under the umbrella of “Welfare State Baroque”, the back room displays a trio of housing projects – Hulme, Thamesmead and Cumbernauld – presented as the high point of Britain’s post-war megastructures. Suspended in mid air, the mono-colour models resemble spaceship extras from Star Wars. This is not an incidental comparison, given the sci-fi utopianism they represented. Perhaps unsurprisingly, this heroic representation counters some of the reality of these projects: Hulme was demolished in 1994, as part of the failure of Britain’s modernist architecture that has informed much of its public image.

Yet we also see reason to question this broader conception of British modernism. As we find out in “Concrete Picturesque”, while Thamesmead has a bad reputation today, in the 1960s it was chosen by Kubrick for its positive connotations. This disconnect between the myth and reality of British modernist architecture is important for considering its condition today; much of it is in a precarious state and in need of a public willing to preserve this important part of Britain’s architectural past.
In the end, “A Clockwork Jerusalem” is not just orientated towards reappraising this past. Like Blake’s poem this is a paean for a “new Jerusalem”, a plea for architects and planners to approach building today with the same zeal as the likes of Garden City creator Ebenezer Howard and pop visionaries Cedric Price and Archigram did before them. These figures helped shape the debate and reception of modernism in Britain yesterday; hopefully this exhibition could do the same thing today.
© all rights reserved