Battery Park City: the project designed to save Lower Manhattan

Occupied by some of the most valuable real estate in NYC, the coastal area is the subject of one of the most ambitious urban resilience projects in the United States. But also among the most expensive. 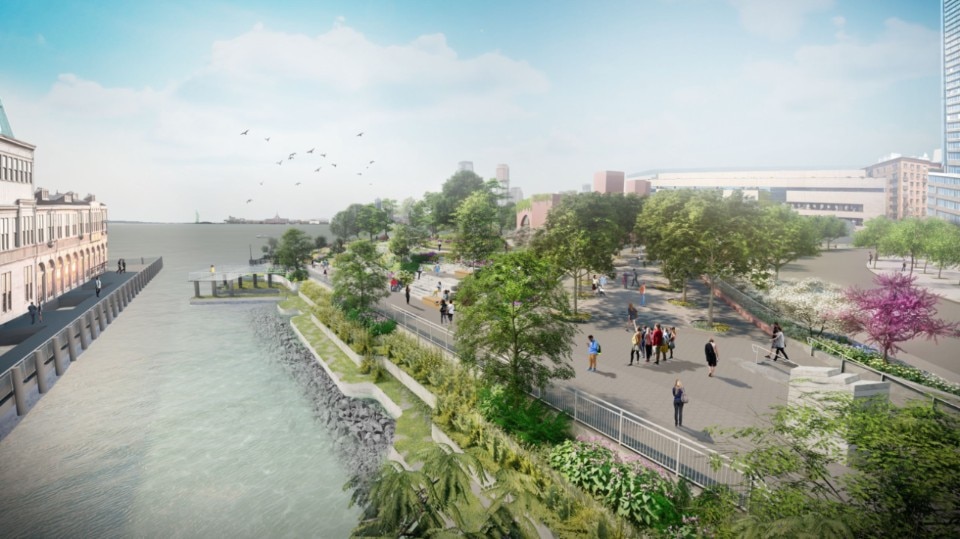 In New York’s topographical landscape, the Battery City area is considered a fundamental testing ground for resilience to climate change. Images of the flooded area after Hurricane Sandy in 2012 still linger in the collective memory. A new project aims to secure it for the future. With the global design company AECOM as the main architect and engineer, the project consists of a large-scale reconstruction of the already artificial coastline.

Like many other such projects, it is an ambitious but, above all, costly urban plan. The first phase of this effort, the South Battery Park City Resiliency Project - which will run from the Museum of Jewish Heritage through Wagner Park, Pier A Plaza, and the Battery to a topographical high point near Bowling Green Plaza - is scheduled to begin in September, with an estimated price tag of at least $221 million; a second phase, which will cost at least $630 million and extend along the neighborhood’s northern and western boundaries, is expected to be completed in 2026.

Although the overall stated goal is the protection of Lower Manhattan from the so-called 100-year floods - which are expected to be increasingly frequent and intense - the redesign of the area is closely linked to the protection of a crucial node of the economy and home to some of the most valuable real estate in the United States.

Battery Park City’s complicated elevation also means that different approaches to resilience and mitigation will be used in this relatively small stretch of waterfront. The existing Wagner Park will be raised by 3 meters and will include a buried flood wall, while Pier A Plaza, on the other hand, will be a two-tiered landscaped park with long, tiered benches that act now as seating, now as a barrier against water during low-level flooding. The entire project has been designed with flooding in mind: the wood used for the seating can withstand immersion for days at a time, the new trees will be saltwater-resistant, and the former brick structures will be rebuilt with structural concrete to resist erosion.

This design tension between designing street furniture with a dual function to also act as flood protection underlines one of the strengths of the current plan, adding and enhancing shared space instead of just erecting large bulkheads.

Read also: One of the planet’s largest urban resilience plans is happening in Toronto
Share