With the eviction of ADM, Amsterdam loses an architecture that epitomised the once radical and visionary housing projects that the city seemed able to realise. 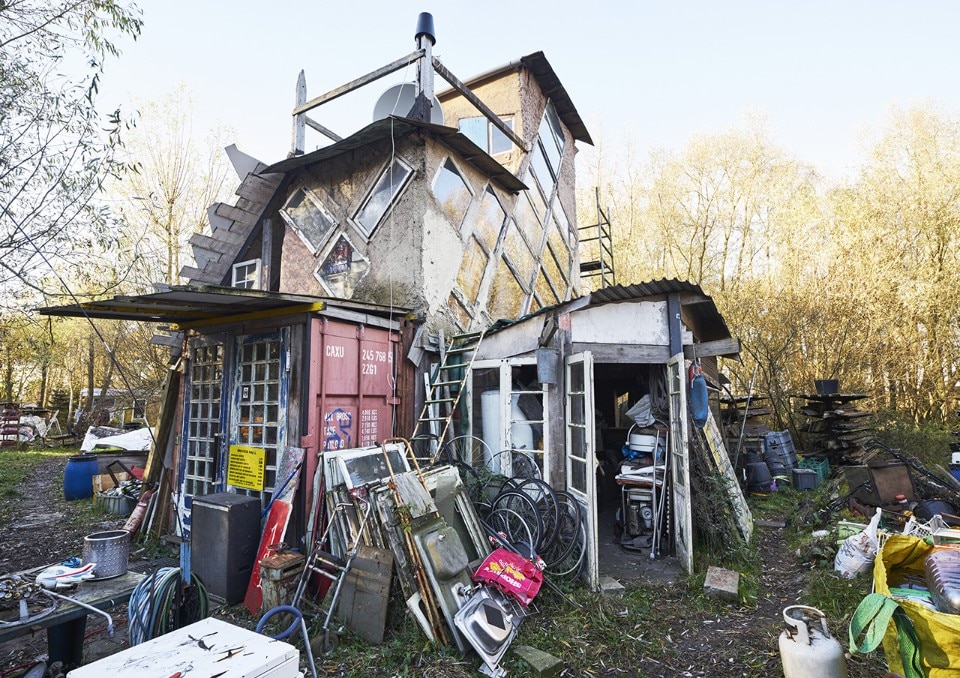 The cultural free-haven ADM (Amsterdamse Droggdok Maatschappij), one of the last largest Amsterdam-based self-organised communities with about 100 people of all ages and nationalities, was evicted on 7 January 2019. The terrain, located in a neglected shipyard from the Amsterdam Drydock Company, was first squatted in 1987, and later again in 1997. Over the years, it gave rise to a social organisation and its ever-growing spatial arrangement of biodiverse habitats, with dozens of self-built structures that served as working and living areas, hosted permaculture practices and myriad cultural events.

Although the Dutch squatting ban came into effect in 2010, the practice of squatting, popularised since the 1960s, continued in the Netherlands, albeit on a limited scale. In the case of ADM, the community has been fighting in the tribunals to prevent eviction since 2015. Despite the efforts of their seven lawyers, and all the individuals and organisations who supported their struggle through more than 20 court cases, the last sentence of summer 2018 led to their eviction. The right to property has, this time, prevailed over human rights, environmental protection, and even the series of investigations of corruption associated with the property’s owners. The city has, nevertheless, assigned a new terrain (de slibvelden) in Amsterdam North to the residents, where the majority of them have moved.

With the ADM eviction, Amsterdam also loses one of the architectures that epitomised the once radical and visionary housing projects that the city seemed able to realise. Long under fierce real estate speculation, the majority of its population now struggle to find affordable housing options, notwithstanding the initiatives of cooperatives and some public agencies. In this uninspiring context, the architectures of the squatting movement still unleash strategies of subversion against the market-oriented housing models and policies that overwhelmingly lead the development of cities. The spatial and legal strategies used by squatters to appropriate the urban fabric are a reminder that other urban and domestic arrangements, and non-commercial forms of communal living are still possible and viable. And the squatters’ argument that the people’s right to housing supersedes the right to own property seems particularly pressing today.

Regrettably, discussions among urban planners, scholars and policy-makers around affordable housing and the growing barriers for equal access to housing in cities too often abstain from re-examining vacancy and questioning notions of property. Meanwhile, sharing unoccupied domestic spaces has become a synonym of corporate monetary exchange instead of a form of solidarity, and co-working/living are mantras for flagship high-end developments. Increasingly appropriated by designers, developers and anti-squat companies, the architectural typologies and strategies of temporary occupation of uninhabited spaces, and the reuse of materials and aesthetics instigated by the squatting movement, are now marketed devoid of their original ideals today.

The architecture of the home and housing is, rather than a people’s right, a preferred form of investment and repository of capital. The object of speculative operations and completely imbricated in the neoliberal policies of urban development, a majority of contemporary housing projects and policies follow the logic of the market and render evident forms of precarity and processes of unequal access and accumulation of capital among the population. Inequalities that perpetuate centuries of targeted violence towards the excluded and oppressed through master plans and design strategies, in which the architectural community is also complicit.

By collectively inhabiting vacant premises, and imagining other models of family and ownership, the squatter movement has set up infrastructure of domestic solidarity. Across the country, squatters have opened spaces for multigenerational and diverse habitation for those who champion collective living, who don’t have access to a home, or even to legal residency status. Through the appropriation and maintenance of structures, these communities have designed models for welcoming, inclusive, affordable architecture with a cultural value, and even sites for multispecies coexistence.

Despite the ban, and unfortunately unlike the case of ADM, a considerable number of squatted spaces in the Netherlands have acquired legal status. Although their radical postulates have had to accommodate more normative approaches, the spatial heritage of the squatting movement still offers alternatives to neoliberal urban renewal and exploitative policies. The survival of these communal spaces has also allowed for the conservation of historic structures and relevant forms of social, cultural and political knowledge engendered inside them that, without the intervention and maintenance of squatters, would have disappeared long ago. The eviction and demolition of ADM is, therefore, a sign of the urgent need to fight in the name of more sensible policies in the city.

The call to recognise the spatial practices of the squatting movement in histories of architecture and their operational platforms aims to stimulate a debate on how architectural projects could mediate between vacancy, ownership and the right to housing. This appeal is launched by, and despite, acknowledging the fragility of these communities, as well as the need to carefully limit the processes of institutional appropriation. Yet, in celebrating and protecting forms of spatial practice, and cultural and political knowledge that are generally precarious, non-author-based and often criminalised, we are also inviting architects to fight for, and design, the terrain for other political possibilities. For actions that engender a city where housing is not a commodity.

Marina Otero Verzier is a Rotterdam-based architect and the director of research at Het Nieuwe Instituut. Otero is part of the Artistic Team of Manifesta 13 in Marseille. Previously, she was the curator of “Work, Body, Leisure,” the Dutch Pavilion at the 2018 Venice Architecture Biennale, and Chief Curator of the 2016 Oslo Architecture Triennale together with the After Belonging Agency. She teaches architecture at RCA in London.

This article is builds upon Architecture of Appropriation, a collective research into squatting as an architectural practice that Het Nieuwe Instituut has been conducting since 2015. The project, exhibition, and upcoming publication analyse a series of case studies through architectural drawings, interviews, and archival material, building up a record of these struggles, spaces, and oral histories for future generations of architects, researchers, policy-makers, and the general public, both in the Netherlands and abroad.

This article was originally published on Domus 1032, February 2019