Hello World is Alice Rawsthorn’s latest chapter in her campaign for the culture of design to be recognised broadly as a cornerstone of society, and not only within design-related circles. 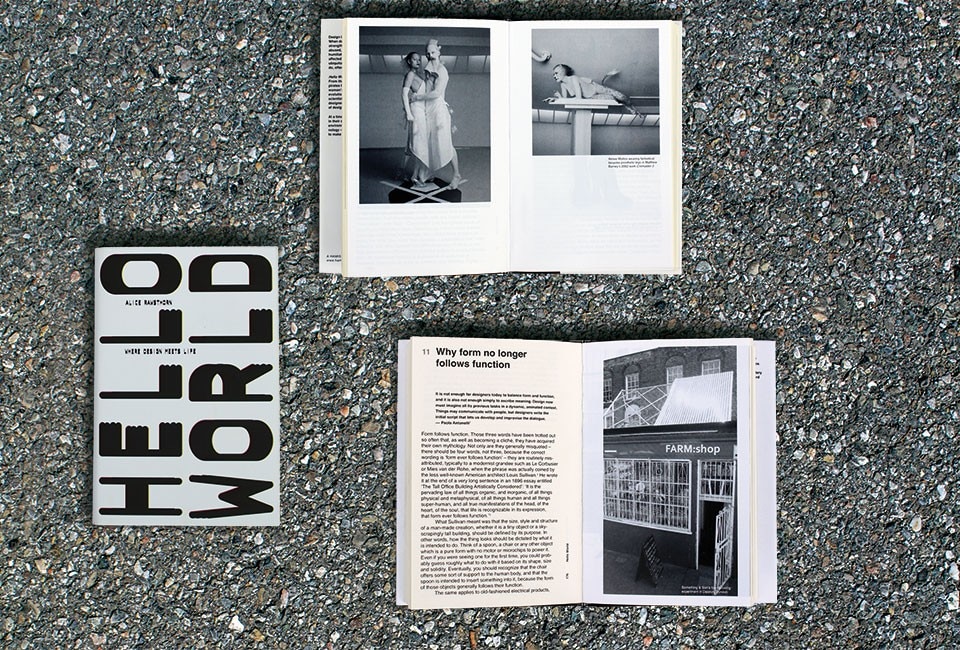 Share
This article was originally published in Domus 968 / April 2013

One of the less frequently discussed but arguably most useful features of Apple’s iPhone and iPad is their ability to act as a litmus paper of sorts for design books. It’s not a matter of whether they’ll make an appearance — they invariably will — but rather which of their myriad attributes the author will pick to hold up as a paradigm of design excellence. There’s the almost viscerally intuitive interface, the nanometric tolerances, the consummate elegance of their appearance, the richness of their ecosystems. Yet infinitesimal tolerances and clean appearances alone fail entirely to explain how a small, relatively inexpensive device could be so overwhelmingly disruptive – there’s obviously something more. Precious few linger on the one element that elevates the iPhone (and all the other smartphones that followed in its footsteps) from the great to the revolutionary: it is a device for making everyone into a designer.

As Alice Rawsthorn points out in Hello World: Where Design Meets Life — her much anticipated new analysis of design’s pivotal role in contemporary culture — the versatility of the smartphone stands for nothing less than a proxy of the individual becoming unchained from the shackles of a Fordist industrial society of passive consumption, embracing instead a culture of tinkering, adaptation, improvisation. The iPhone is a paradoxical device: on the one hand, it is one of the industrial products most heavily defended against user modification in the history of design; on the other, it is an open platform that can be, and has been, adapted to literally hundreds of thousands of uses Apple could never have possibly imagined.

In the latter sense, considered in relation to its commercial success, it represents a fundamentally new and unprecedented paradigm. The information age — a moment of exponential growth in innovative, disruptive technologies, in which almost 2,000 patents are filed every single working day in the US alone — could just as easily be defined as the age of total design. The future fate of postindustrial economies (China’s among them) hinges squarely on their ability to produce a competitive class of innovators and creators in every field of design, tangible and intangible alike.

The key postulation of Hello World is that despite its ubiquity, there is a lot of confusion about just what design is

It’s no coincidence that Rawsthorn frequently addresses world leaders in Davos on the future of design — this book could be seen as the latest chapter in her ongoing campaign for the culture of design to be recognised broadly, and not only within design-related circles, as a cornerstone of today’s society, economy and culture.

Hello World’s argument in support of this thesis unfolds through a well-researched and frequently surprising array of case studies, stories, episodes and anecdotes, ranging from the frequently cited analysis of the Jolly Roger as an early form of corporate identity for pirates to the story behind the OLPC (One Laptop Per Child) initiative, which succeed in pulling the book off the pedestal that so many histories of design already occupy and situating it on the street, in the pockets and travel bags of readers of all ages, backgrounds and cultures. It unashamedly reaches out to a broad audience, eschewing theoretical abstraction in favour of practical examples drawn from everyday life.

Perhaps the most unusual and compelling feature of Hello World is that it dodges the trap of becoming a book about objects. It is in fact about people, and their struggle to further good design in every realm, from prosthetics to interfaces — something that lends it a very personal edge. The key postulation of Hello World is that despite its ubiquity, there is a lot of confusion about just what design is. The diversity of the cases that Rawsthorn examines emphasises its breadth of influence in everyday life in the 21st century, especially in the realm of the social — its role in mitigating suffering, waste, ignorance, exploitation and deprivation by design. If good design is to prevail, Rawsthorn seems to be saying, it must be first recognised as such, and not just within the design community. This book’s lasting contribution will be to extend considerably the body of people in every echelon of society who believe that design really does have a mandate to change the world. Joseph Grima (@joseph_grima)