In the dawn of the October Revolution, a cross-disciplinary movement rises from the complex landscape of Russian Avant-gardes, aiming to build a brand-new culture for the people of the Socialist International, through an integration of science, industry and art. 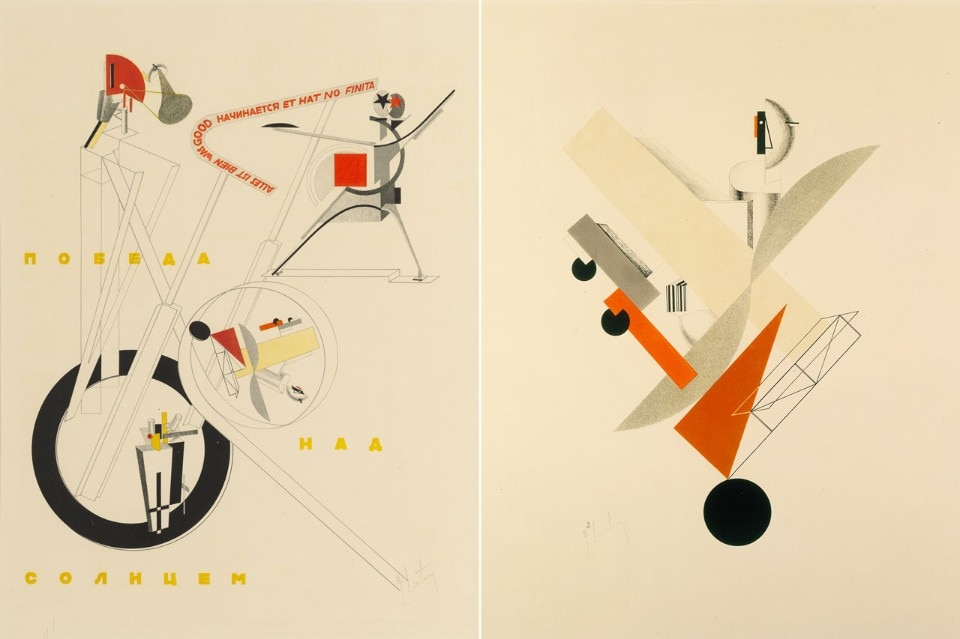 Constructivism is a broad yet specific term, commonly encompassing all the evolutions of Russian Anvant-gardes around and after the October Revolution of 1917.
Such historical event was in fact a turning point for different tendencies that had been countering academism and classicism from different directions: from romantic tendencies rediscovering national culture through their eclecticism, through artisanal workshops reviving the techniques of Slavic craftsmanship; from the expressionist paintings of the Abramtsevo circle up to the Organization for proletarian Culture, the Proletkult, founded in 1906 by the economist Aleksandr Bogdanov, aiming to build a new culture for a new collectivity where “science, industry and art had to come together to elevate both traditional culture and material production” (Frampton, 2000). Graphic design rose to a crucial position in reuniting a whole, largely illiterate population around new messages, expressed through disruptive linguistic and visual codes.

A synthesis of arts, production, technique and ideology would shape the intellectual discourse in post-revolution Russia, evolving on a parallel — and largely similar — path to Bauhaus, and even influencing the Weimar school in some aspects. In 1920 the Inkhuk (Institute for Art Culture) and the Vkhutemas (Higher Art and Technical Studios) were created, articulating such approach and already showing early ideological differentiation in its application. The  totally abstract art expressed in the Suprematist compositions by Kazimir Malevič — and in the pre-Bauhaus work by Vassily Kandinsky as well — was contrasted by the so-called Productivist proposals of Vladimir Tatlin, Aleksandr Rodchenko, Aleksei Gan emphasizing the power of reality and technical innovation as means of construction for culture.

Kazimir Malevič, Costume sketch for “Victory over the Sun”. Right: a scene from the 2013 staging.

El Lissitzky, drawings from the three-dimensional design of the electro-mechanical show "Victory over the Sun", 1923

A. Vesnin: project design of the external façade of VKHUTEMAS dedicated to the 10th anniversary of the October Revolution. Paper, printing, watercolor. © The Schusev State Museum of Architecture Moscow / VG Bild-Kunst, Bonn 2014

Vkhutemas: Exhibition of student’s work on “Evidence and expression of mass and weight”, School year 1927-1928. © The Schusev State Museum of Architecture Moscow

Anna Gavrilovna and Konstantin Melnikov on the construction site of Melnikov house, Moscow, 1927. In Domus n.672, May 1986

Kazimir Malevič, Costume sketch for “Victory over the Sun”. Right: a scene from the 2013 staging.

El Lissitzky, drawings from the three-dimensional design of the electro-mechanical show "Victory over the Sun", 1923

A. Vesnin: project design of the external façade of VKHUTEMAS dedicated to the 10th anniversary of the October Revolution. Paper, printing, watercolor. © The Schusev State Museum of Architecture Moscow / VG Bild-Kunst, Bonn 2014

Vkhutemas: Exhibition of student’s work on “Evidence and expression of mass and weight”, School year 1927-1928. © The Schusev State Museum of Architecture Moscow

Anna Gavrilovna and Konstantin Melnikov on the construction site of Melnikov house, Moscow, 1927. In Domus n.672, May 1986

Constructivism can indeed be defined as a movement, as it gathered around manifestos, even more than one. The Realism Manifesto (1920) by Naum Gabo and Anton Pevsner, and the Productivist Group Program (1920) by Rodchenko, Vesnin, Liubov Popova and Varvara Stepanova (later integrated in Konstruktivizm by Gan, 1922) would embody the two different natures of arts during the Revolution period. The Productivist tendency could be epitomized by Tatlin’s project for a Monument to the Third International (1919-20), where two trellis spirals would climb up to a height of 400 metres into an entangled composition surrounding a series of transparent volumes, each one rotating at a different speed.
Still, one of the most important profile of such multifaceted panorama was the transversal figure of El Lissitzky, translating into architectural shapes the spatial composition called Proun, hybrid forms halfway between art and architecture, an evolution of Malevič’s Suprematist abstractions, the definite foundation of Lissitzky’s iconic visions of horizontal skyscrapers, or his project for the Lenin’s tribune (1920).

In the specific field of architecture, Constructivism would furtherly express another multiplicity of voices. In addition to key figures such as Tatlin, or the Vesnin brothers — known for groundbreaking projects including the Leningradskaja Pravda building in Moscow, 1924 — Nikolaj Ladovsky became the creator and director of the Asnova (New Architects Association), which was soon joined by El Lissitzky and another crucial figure in Russian architectural landscape, Konstantin Melnikov. Melnikov translated into several project, both built and unbuilt, a synthesis between the principles of Russian craftsmanship (as expressed in his Sucharev market hall in Moscov, 1924-25) and those tendencies which would confer a leading role in design to geometry as an instrument to convey messages through space, be it public (as for the USSR Pavilion at the Exposition des Arts Décoratifs in Paris, 1925) or private (as witnessed by the architect’s cylindrical studio-house in Moscow, 1927 )

When political and economic priorities for the Soviet state changed as a consequence of the introduction of the NEP (New Economic Policy, 1924), housing became officially “the most relevant question in workers’ life” (Frampton, 2000); as a critique of an alleged formalist drift of the Vkhutemas, the OSA group (Organization of Contemporary Architects) was created, under the guide of Moisei Ginzburg. His Narkomfin housing complex in Moscow (1929) gave an architectural expression to such political turn, by emphasizing common spaces while shrinking the familiar units and bringing the aesthetics back to the stressing of  a stricter functionality. Ginzburg’s protégé, Ivan Leonidov, aimed instead to a conciliation of new political trends and principles from Suprematism, conceiving slightly science-fictional public megastructures such as the Lenin Institute for Moscow (1927).
The Constructivist season — undermined since the beginning by several contrasts between the government and the intellectual class — drew to a close as the Internationalist principles of Soviet socialism were replaced during the Stalin era (and more intensely starting from the early 30s) by a return to Russian nationalism, conveying its message through the aesthetics of a more monumental historicism.