Met at Dutch Design Week, Israel’s designer talked about his latest projects – on the potential of salt and on vegan design – both sharing his emotional, ethical and unconventional approach. 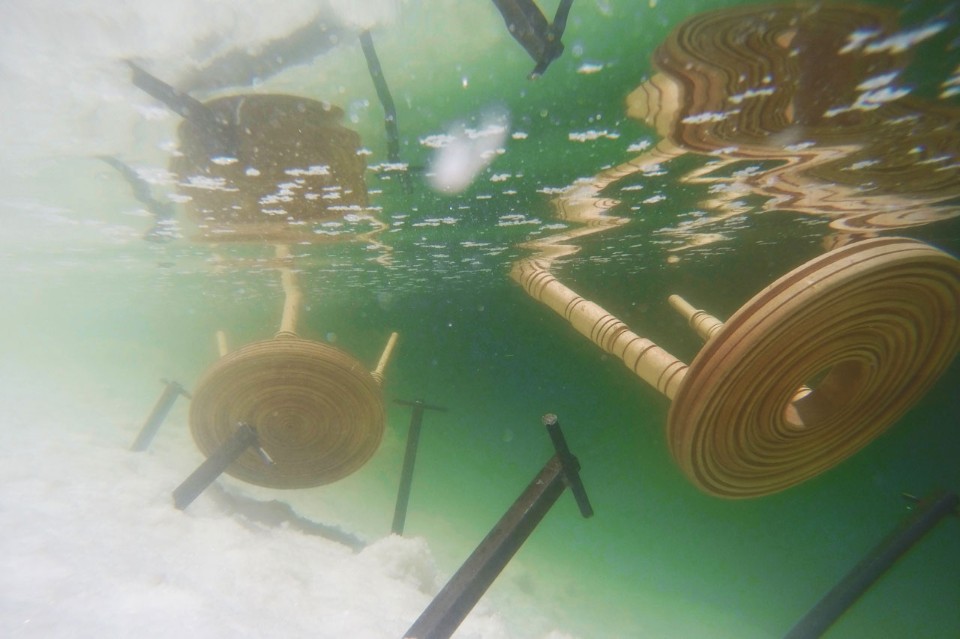 Share
Israeli Erez Nevi Pana was born in 1983 and studied at the Academy in Eindhoven. He likes working with humble materials filled with symbolism – even better if they come from his homeland and better still if they are natural. Indeed, Israel’s sun-consumed desert prompted analysis of the potential of salt, considered a versatile substance suited to creative use – and for the innate implications of such an iconic element.
Nevi Pana produced the “Salt” collection for the exhibition at the end of the Design Master course. It is attracting curiosity and enjoying success because, as well as being a durable furnishing production centred on a special crystallisation process, the material is open to multiple architectural declinations. His is an unusual, emotional and certainly unconventional approach to design. Reiterating his rigorous and ethical stance, Nevi Pana presented “Veganism”, a controversial project showing that design is possible without using any materials of animal origin, at his self-managed La Terrasse for this year’s Dutch Design Week in Eindhoven (22–30 October 2016). A vegan himself, the young man has transferred his deep-rooted respect for all life, human beings and nature into the way he looks at the design project.

Maria Cristina Didero: What is your approach to design and how would you define it in your own words?

Erez Nevi Pana: My approach is both conceptual and experimental. Part of the design process is to get lost and be spontaneous. I collect experiences and experiment with ideas and materials even if I don’t see the object or the function in the initial steps. Maybe it sounds a bit offbeat but I’m just like a salmon swimming against the current. I think I chose design as I knew I wouldn’t be that radical in the art world - I like to be at both extremes but never in the middle.

Maria Cristina Didero: I understand that you are an explorer who “uses design as a significant tool to investigate phenomena through material experimentation.” What prompted this attitude?

Erez Nevi Pana: I guess it’s mainly because of my education; I studied biology as my major for four years in high school, in addition to crossbreeding plants in my parents’ nursery, where I spent most of my childhood. These two environments, I think, built my experimental and playful character. As I proceeded into the direction of design, the laboratory methodology and material investigation seemed the perfect fusion of my two passions. Basically, I use design as my platform to exhibit my experiments with materials, with people and the contexts around me, and I know that through this discipline I have more freedom.

Maria Cristina Didero: This experimentation usually makes you deliver objects that always have a second meaning – do you take this into consideration when starting a new project. (I mean that the content has to be stronger than the form – for me this is a positive)

Erez Nevi Pana: You can find many layers and depths in my work. I like to write through the process of designing and words sometimes have the same scale as form and materials in my design process. The exhibitions I have curated in the last two years are also text-based and a good phrase from a text can trigger many ideas and directions in the actual design process. I believe that designers have to be thinkers and drive society to think as well, especially when the boundaries between the educated designer and others who did not train as designers have been blurred by technologies which have  ״cracked” the exclusivity designers had until not long ago. I like to tell a story with my designs and to provoke people to think or even act when they interact with it.

Maria Cristina Didero: I am very interested in your Salt project. You have invented and patented a process by which you melt salt in the sun (this must happen in Israel as you don’t get much sun in the Netherlands…) to create large crystals in just a few minutes. What prompted you to investigate this unusual subject and how did the process start?

Erez Nevi Pana: I started working with salt in the second year of my Master studies at the Design Academy in Eindhoven. We had to write our thesis and I was a bit homesick so, while visiting Israel during the summer, I saw this huge mountain of salt in the middle of the desert which led to in-depth investigation of this by-product of the Dead Sea Works. While writing my thesis, I had to develop the design and, out of sheer curiosity for the material’s reaction to heat, I melted it in the workshop of the Design Academy, something they did not welcome and I was blocked from the workshops for a few months… I’m a stubborn guy and found other ways to continue outside the Academy. That took me back to the Dead Sea region to experiment with salt at the lowest point on Earth. The idea of melting salt using the sunlight was influenced by the great work of Markus Kayser who melted sand with solar energy. I knew the energy source in the melting process had to be inexpensive and it made sense to use solar energy to produce tiles and blocks that would be like marble for the poor. Since I was the first person in the world using this method I was able to patent it.

Maria Cristina Didero: I would like to know how you had the idea of working with such a natural material as salt - a pretty iconic one full of symbolism – and the meaning to you of using it?

Erez Nevi Pana: When I discovered that the Dead Sea Works has 20 million tons of salt waste from bromine and potash production, I knew I had found my next challenge. The story of salt is extremely powerful and  interwoven with our history. I see the decline of this precious material as a reflection of the mess we have brought to our world. I like to help rescue people – animals and I guess also materials – I’m super emotional in my work and lifestyle so I took it as a duty to make this abundant  and abandoned material desirable again.

Maria Cristina Didero: Isn’t it an innovative thought that salt could be used in objects or bigger things? You have said: “a production of salt tiles and blocks that can be used by the local people for their homes and also assimilated into the rising hotel industry of this area.” Might this project lead to many different potential applications of your invention? Could it be used in architectural structures?

Erez Nevi Pana: I had some references such as the work of Tokujin Yoshioka who made objects with crystallised salt but I knew that the concept of luxury products would not address the need to consume 20 million tons every year. Of course, for someone studying contextual design at DAE, it’s more logical to go to the direction of design art and produce a beautiful object with salt but I wanted to deal with this mind-blowing quantity of salt that is piling up and touch on social problems in this region. The concept of using the salt to build housing for local settlers and for the hotels around the Dead Sea was more logical. I am now in contact with companies around the world and together we have a vision of developing salt cities around us.

Maria Cristina Didero: This project has special meaning for you as do other activities you are involved in such as your last show entitled Veganism, which you curated for the 2016 Dutch Design Week in Eindhoven. It is strongly concerned with ethics, more so than aesthetics. Tell me more about it.

Erez Nevi Pana: I have been a vegan for a few years now and the process started with my diet and then moved on to the clothing I wear. While I was weaving my Neomadic collection, I realised that I consume animals through my work as well. I decided to concentrate on this in my PhD research and, since the idea of veganism in design is new, I decided to curate an exhibition with nine designers and writers reflecting on the theme. It was the first ever exhibition dealing with veganism in design and I was very happy with the outcome, and the way the participants approached the theme. I must admit, it was a long and challenging process as I was the only vegan in the group.

Maria Cristina Didero: I understand that La Terrasse, where the “Veganism” show took place, is a “platform that unites designers and writers around one theme” and that you initiated it. It looks like a place that aims “to inspire and provoke designers, who express their interpretation of the chosen subject through products and text.” This show was quite a strong one and asked people key questions about their behaviour; you actually confirmed that design without using animal-materials is possible. My questions is: Do you believe design can touch souls and change people’s habits?

Erez Nevi Pana: “The Veganism” show put a mirror to the visitors’ faces, made them think and brought some understanding of the fact that animal exploitation doesn’t end on their plates. I can add that the designers who participated struggled greatly when forming their concepts and designs, and it was obvious to me why. As I said, I was the only vegan in a group of nine but they managed to bring other perspectives and visions that made me really proud. Moreover, I have always been driven by a desire to create objects or write texts that will trigger emotions and I would say that design can definitely touch souls. The creative professions tend to be more sentimental than analytical; I would advise any designer to follow the emotional path and add something from within.

Maria Cristina Didero: I appreciated this sense of raw edges, a special feeling that connects some examples of Israeli design and a specific attitude to design generally speaking. What is your opinion on the contemporary Israeli design scene and what main features do you see in it; are there any unusual ones in your opinion?

Erez Nevi Pana: I like the design scene in Tel Aviv. I’m now spending time there after four years away and it feels like the scene is bubbling. So much pressure and stress is put on the people who live in this country that you can see them escaping into creativity and art. I can’t really define Israeli design and I’m not sure whether anyone can. It has never been documented, researched and collected coherently and, to be honest, I believe the last things we need are more nationalistic fields emerging. Design is a language stronger than any border. If anything, it can be described as multifaceted. I think we should just leave these labels in the 20th century.

Maria Cristina Didero: Again, to what degree can design be considered a powerful drive that moves society and can it change the society we live in?

Erez Nevi Pana: Design has always motivated social change and it always will. Just think about society before the first tool or today’s society and the iPhone culture – a good design can change, influence and reorganise people's functioning for the better in their lifetime but sometimes I feel that designers pay a price for trying to change the society we live in and they struggle for years because of the way they are educated, with so much pressure put on them. The attitude to design becomes more mechanical, robotic even in a way; they forget they chose a profession that should be creative and fun. I don’t see many happy designers around but maybe it’s just the lack of sun in Eindhoven...