For “The Velvet Underground – New York Extravaganza” at the Paris Philarmonie, Matali Crasset designed an exhibition route that is a mix of visual and sound synergies. 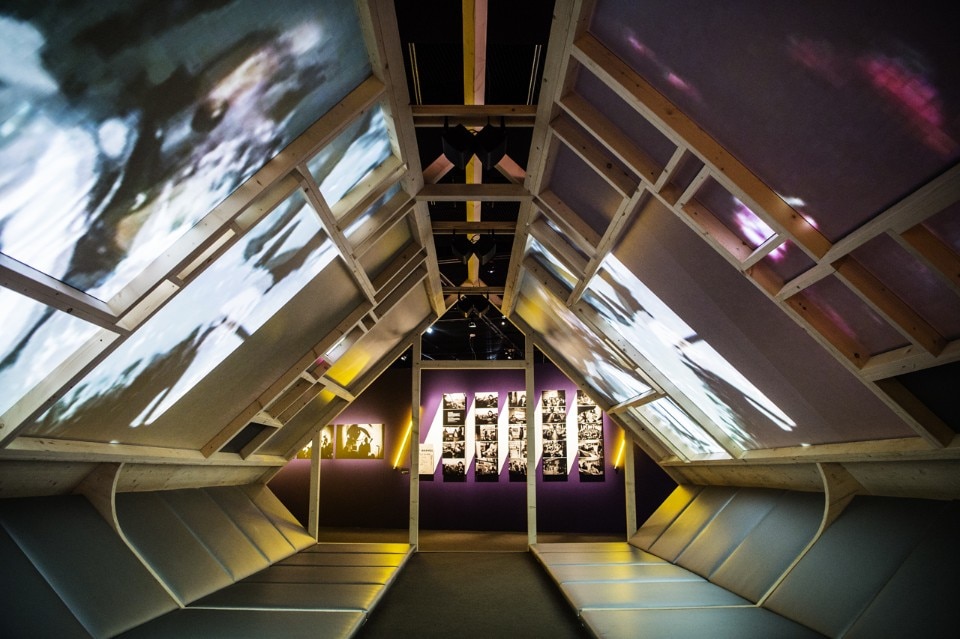 Share
Matali Crasset  lends fluidity to a mountain of archive material revolving around the legendary 1960s’ group Velvet Underground. We discuss it in an interview centred on counter culture, music and the difficulties of delivering a shared take on this controversial period.

Ivo Bonacorsi: Can you tell us how the project originated? Unless I am mistaken, you had already tackled the legendary Warhol – who was behind the Velvet Underground’s album cover with the banana – in the “Super Warhol” exhibition curated by Germano Celant at the Grimaldi Forum about 15 years ago.

Matali Crasset: Once again, it is driven by the passion of two curators. Christian Fevret is a fan of the group and familiar with the tiniest details. More importantly, he knows its influences, sources and inspiration plus its controversial relationship with the American counterculture, all as well as being an expert of the New York of those years. Carole Mirabello is a film producer who processed the huge quantity of audio-visual material about the group and dealt with the other film sources so important to the exhibition. The direct contact that Christian Fevret – following his time at the Les Inrockuptibles magazine – had with John Cale, Gerald Malanga and Jonas Mekas also proved crucial. He turned out to be not only the cult film-maker we all know but also its pure and fusional memory, thanks to his archive material.

This close relationship with some protagonists fuelled extremely generous exchanges and revitalised a project that was never intended as simply an archive display.

Ivo Bonacorsi: I think the gamble paid off but I had the impression of being in a workshop where the definition of subculture has been reprocessed as an ever fainter recording of a wave. I interpret your design of the event as a seismograph for potential listening and an exploration of experimentation in general.

Matali Crasset: The setting I created has been read (not very positively) as an art installation (she laughs…)

Ivo Bonacorsi: I would take that criticism as a great compliment, precisely because you have thought outside the box…

Matali Crasset: It is however clear that there are two zones: the underground one, exhibiting fetish documents and sometimes very fragile material, and another that takes a look at but is perhaps also an overview of the city of New York in those years, from the bottom up. It is a highly idealised place full of graphic art and projects, a mixed technique highlighting the contrasts. I sought a totemic presence for the people behind this adventure, dedicated to them and their personal story as (protagonists) musicians, artists, poets, film-makers and muses. If you notice, I created these structures that are rising steps like those commonly found in industrial workshops; the icon is at the top. Legend attained as we know it, Lou Reed, Nico and all the others who only gained visibility at city level. We have broadened the field to include not just the group members but all those active in that climate, from La Monte Young to Terry Riley and even Doug Yule. Significantly, there is every media and technique used back then, from fanzines to the cinema, performance and even pornography.

Ivo Bonacorsi: The impression, at least mine, is that it is a story not yet calmed, the tensions are still present among those who attained success and have remained cult figures.

Matali Crasset: These are people who took a risk at all levels, personal and I would say political, too. People who themselves experimented, from using drugs to liberation from social and sexual conventions and were, at the same time, immersed in a collective energy, without a hint of solitude and with everything out in the open. Then there are complex figures such as Barbara Rubin, the film-maker who introduced Warhol to the Velvet Underground’s music. In the Mekas installation devoted to her, you perceive a nostalgia for this fluidity, for these disinterested exchanges and the interest in hybrid music and art scenes. We are, however, speaking of a microcosm that had a huge impact on the future of music and art but that was at the time totally experimental and not exactly crowned with glory.

Ivo Bonacorsi: Just think, the first proper Velvet Underground “reunion” happened when Warhol died. Lou Reed and John Cale met up again at his funeral service in 1987 and the ensuing album is called Songs for Drella (a nickname formed from Dracula and Cinderella in use at the Factory). Then, from that moment on, the positioning was strongly artistic. At the 1992 concert at the Fondation Cartier, there is a clear sense that they were moving in a not exactly pop and perhaps more Fluxus direction.

Matali Crasset: I believe there was a rejection of America and its mass culture. The Velvet Underground were actually anti-hippies but you have to provide a context. You say that you don’t like the way the exhibition opens with Allen Ginsberg’s America but I love the curators’ boldness in providing a context. I like the wall of video montages by Jonathan Caouette at the entrance with inserts of Cassavetes films. After all, we are talking of All Tomorrow’s Parties, this possibility of permanence and extension. Just as I have recreated this “factory” space that is a reminder but can also be experienced not just oneirically. I would like to have gone farther, with a screen-printing studio, reviving the techniques of the period and I like the idea that we have gone (or at least tried to go) beyond pure revival. I like the collective side of this adventure and that period, of which I have only read and heard, with all the tensions that it brought and brings. I hope something similar can continue to exist.

Ivo Bonacorsi: I was quite impressed by Jonas Mekas who wrote spontaneously during the vernissage about one of your structures “Suddenly it all came back…”

Matali Crasset: It was a pleasure and confirmation that I had gone in the right direction, seeking a physical transcription of a mental place.

Ivo Bonacorsi: It really is an attempt to create the architecture of the underground. You have abandoned your codes slightly but you have held onto your rule of generating synergies and respecting community spaces.

Matali Crasset: The fact that protagonists such as Jonas Mekas, John Cale and Gerard Malanga liked it is perhaps the best answer to my concerns. I would have expected even stronger interactions. Some wonderful personal contributions are very formalistic but so they should be, shifted to a more classicist register. I would like the fine Filarmonica John Cale tribute concert to become a permanent part of the exhibition. Fifty years on and it is still live matter, with which to engage.