What is an architecture Biennale?

In December 1996, Domus published the conversation that took place between Dietmar Steiner and the director of the VI Venice Architecture Biennale Hans Hollein: a general reflection on the role of exhibitions. 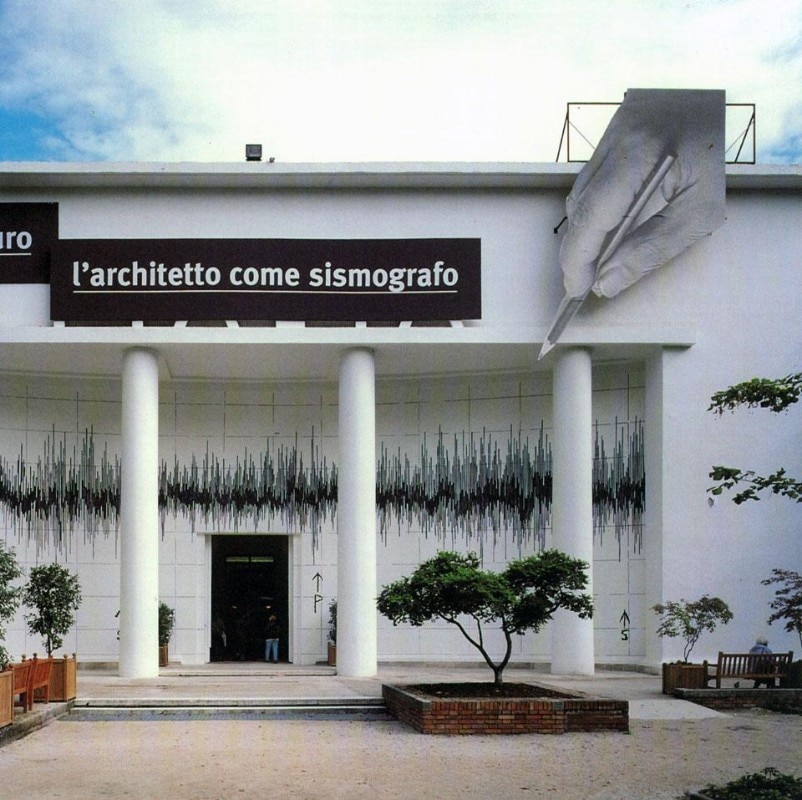 What is an Architecture Biennale? Dietmar Steiner talks to Hans Hollein

Dietmar Steiner: The title of the 6th Architecture Biennale of Venice is “Sensing the Future – The Architect as a Seismograph.” Before I talk about this theme, I would like to look at a graphic element which keeps appearing at this exhibition: the hand of the architect. This is an ambivalent symbol. It accentuactes the individual, almost private and intimate, artistic imagination, the architect, the draughtsman, the visionary who designs and at the same time it emphasises the tragedy that this is what no longer happens in the current process by which archietcture is produced today. Incidentally, whose hand is that one on the poster?
Hans Hollein: The answer will surprise you. It happens to be my hand on the poster. And as for the “architect's hand” there was no declared intention about its significance. It was just an idea that for once we would not have a portrait, the head of the architect, but would ask each of them to send in pictures of their hand. Some architects saw it as a project in its own right and so turned a simple question into a substantial project. Probably a lot of the architects involved realised that with this basically unimportant detail they could convey a message about their own attitude to architecture and about architecture in general.

Dietmar Steiner: The next question, which of course was discussed at great lenghth, was the choice of architects to take part in the main exhibition. It is a fact of life in the world of culture, that people no longer discuss the value of the work as such but far more who is represented, whose work is on show or has been publicised and whose has not.
Hans Hollein: It is the nature of choosing personalities that they will simply never be accepted by everyone. There is always a grey area. We tried to devise a strategy to deal whith this in the best possibile way. It might sound simplicistic but the division into two groups was fundamental here. If there had been only one group the choice would have been only one groupthe choice would have been far more controversial and a lot of new and previously unknown architects would not have been considered. But if you divide potential participants into two groups, the so-called controversial architects who are important today and were with the academic committee and the “emerging voices” who are not necessarly known to everyone but who were proposed by the commissioners of the national pavilions in a spirit of risk and hope, then you have the possibility for a strategic, democratic opening for the future of architecture. In addition to that there were some preliminary discussions with some of the countries with the result that some architects were not represented in the main exhibition beacuse they were to be represented in the national exhibition. The fact that this did not always work was another risk. But one fundamental attitude was important in this: we live in a pluralistic world – in terms of life-style, culture and thus also architecture. It is totally nonsensical to propagate a single trend – hi-tech, deconstructivist, new simplicity, regionalism or whatever. And that brings us to the title of the exhibition: Sensing the Future – The Architect as Seismograph. This metaphor was much criticised, for instance on the grounds that it denied architects any capacity to be responsible for the future. Today the future is being made in developments in the field of technology and telecommunications, far removed from architecture. And the architect as seismograph reacts like the instrument only to eruptions which take place somewhere else and are caused by others. In this context I still see the architect, and my view has been confirmed by the history of this century, as an “all rounder,” someone capable of bringing together many developments – social, technological, three-dimensional and pictorial – and combining them in a concrete shape. Clear authorship of the architect for a project still exists. Utzon's Sydney Opera House is an historical example of how it is possible for an architectural form to become a symbol in its own time for an entire city. Or do you have any other symbol for Sydney? And if you look at the new building projects – shopping centres, airports, new centres – it is always individual architects who have set clear precedents that mass-prouced architecture has then followed. Without Foster or Pei's wonderful towers in Hong Kong there would no doubt never been such a skyscraper boom in south-east Asia. It is always singular architects who have set a precedent which investors and real estate developers follow. That is also part of the seismographic capacity of architects – to feel that there are new social and economic tasks which can become a precedent, a building.

Dietmar Steiner: You are emphasising the architect as an artistic subject in all this. This is a 19th century view, that the architect is a position to not simply fulfil social and economic programmes but to transcend them. And yet it is striking that you remain largely within the rituals of the internal architectural discussion which says that the architect is there to fulfil needs. New fields, such as mass tourism or the question od entertainment architecture, as they were seen in the case of the U.S.A. with the presentation of a developer like Disney for the first time ever, were only addressed in a half-hearted way. At the same time I saw in this Biennale the attempt to write a new history of the architectureof the second half of this century as it draws to a close, as happened with the presentation of the ‘Radicals.’
Hans Hollein: With the historical presentation of the ‘Radicals’ of the sixties and seventies we actually wanted to show a development in which architects in different parts of the world were were part of a ‘movement’ formulating new ideas that have now become reality. And I have to admit in all honesty, that I feel there is a lack of any comparable tendency today. By contrast to the almost collective movement of those years I see today an extreme splitting of individual attitudes. I believe that people should use this retrospective to think about that fact. As a result of the developmentsin telecommunications we talk today of the “global village.” And yet the exhibition shows an architectural hegemony of the nothern emisphere, of the Europe-North America-Japan triangle. It is no coincidence that that this is congruent with the economic and media power over the planet. In this Architecture Biennale I tried to break through boundaries – just to make a few inroads in that direction – but you are right it is still a problem. The question here is not just about whereabouts in the world the profession of architect exists. It is about other cultures’ obligation to civilisation to know and teach their messages and traditions.