The inflatable cities by Prada Poole

Two pneumatic worlds, between Ibiza and Seville, the Instant City and a skating facility, tell the story on the 1970s Domus of the Spanish experimental scene and a new free relationship between the body, the environment, and the built space. 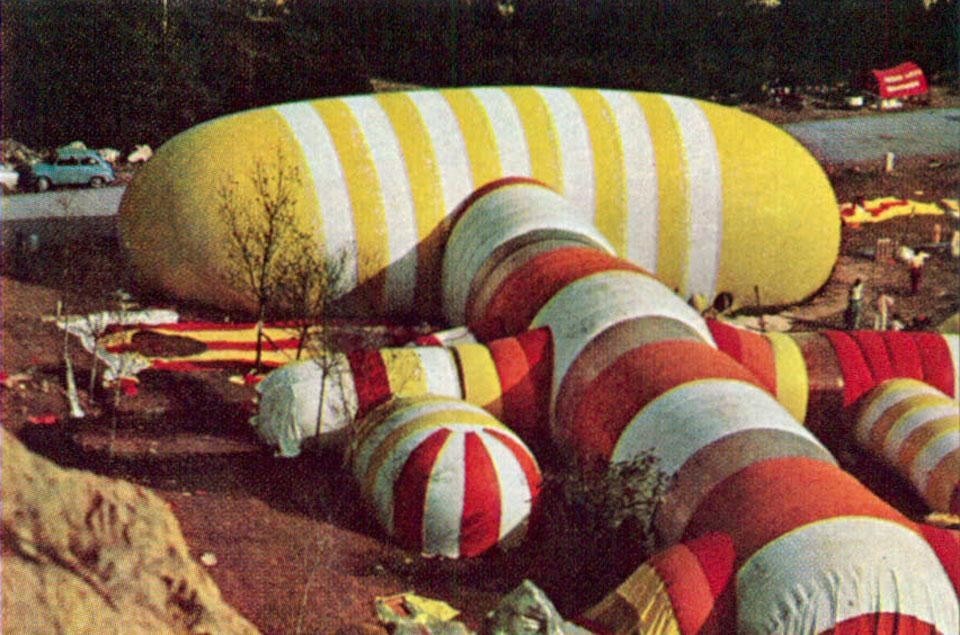 From the second half of the 1960s, while radical design and architecture experiences were rampant in Europe, Spain too experienced its own season of experimentation and challenge to tradition. As Mónica Garcia recounts, however, in that last decade of a waning dictatorship the Spanish experimental scene faces a difficulty in identifying itself as a unified movement in a regime of still limited freedoms. Independent experiences were born, all centered on a return to the freedom of the individual in his relation to space, but each with a different expression. José Miguel de Prada Poole, in the radical, hi-tech spirit of the time that Reyner Banham evoked in his Architecture of the Well-Tempered Environment, worked on large-scale forms of climate control, on the creation of pneumatic structures that bodies could come to perceive as environments, architectures that were not present although they were fundamental, or impossible to ignore as huge multicolored tubes of striped fabric.

It could translate into extraterrestrial projects, or into very material and earthly projects such as the iconic Instant City created in Ibiza for  the ICSID (International Council of Societies of Industrial Design), on which Domus publishes in issue 509 (April 1972) excerpts of articles from various newspapers of the time, documenting reactions to an event that, under “pneumatic, semi-transparent and silent domes”, had welcomed young people from all over the world. Or even like the huge skating city in the middle of Andalusia, which came out on November 1976 issue 563.

Meeting on the beach between the "how" people, the craft designers, and the "why" people, the Instant City youth. In the hotels, the people of the trade, under the pneumatic, semi-transparent and silent domes, with camp beds lined up on the ground, the young people, convened from many countries, Spain, England, Ireland, Austria, USA. Indifferent to both the fantastic beauty and technical imperfections of Instant City built by them (by a part of them), in a short time and for a short time, they counted on presence; they counted for presence; they moved emotions, comparisons, thoughts, for presence.

“… From the ‘houses’ 01 Instant City different young people appear: one is carrying a rabbit, another is playing the flute, bare feeted, a towel wrapped around the hips or wearing a fur-coat. Some have a red plastic ribbon on their forehead. It’s the same material as that of Instant City. It continues from their “houses”, from floors and walls of them, binding them together for this time – it is their red ribbon for this moment. Instant City arouses people’s attention. I don’t think that it disturbs the inhabitants of Instant City when people come to look at their town, but it is a pity that most people come to say that it has beautiful colours and it looks nice. One thing that shocks these young people in their town is that most people don’t even try to think what is inside the idea. In Instant City people touch each other. They are friends. It has been an intention to create an environment, which would exist not as an encouragement to social relationships but as an answer to them …”. (Helsinki, 05 gennaio 1972)

“The world is preparing for a metamorphosis of the gods.... Design is the creation of forms that materialize behavior. The process is the form. The process changes, but the form results in an unchanging matter, the skeleton that contains the living being, which is the process. The essential design problem for the future is the invention of mutable forms that can materialize a process indefinitely, allowing it to change spontaneously and unpredictably. The city, which is the most complex life process, has no changeable form. The instantaneous city is the most interesting design problem of our generation. A city of nomads that appears in a sacred place and disappears with the last departures. A city even for sedentary people that changes shape according to the ‘journeys’ of its inhabitants...” (ADI/FAD Instant City Ad Hoc Committee, Barcelona)

“It was, initially, to make possible a collective experience in which work and information were the only means of expression through which to shape an ephemeral city that would highlight the contradictions in which the current industrial design landscape moves. In April, we held some meetings with ADIFAD and later with ICSID members in Ibiza, committing to provide accommodations for design students who wanted to attend the congress. We prepared a manifesto, information and posters, and disseminated them in industrial design-related circles around the world...

We got in touch with Jose Prada, an expert in pneumatic architecture, who came up with a minimal language that would allow any person to build a roof in a short time and with few tools. The pneumatic energy that could power the city would be common to all cells. We set up a very technological construction system that would, however, require entirely artisanal methods (staples every inch, joints between cylinders and spheres crossed by ropes to absorb tension, doors with organic shapes) where ingenuity offered alternatives to lack of means.

We got in touch with commercial lines that could supply us with PVC, fans, staples...and, at the end of August, with a very small group we built the first inflatable prototype in Sardanyola, and, at the beginning of September, the first group made up of people from all over the world arrived in Ibiza to build the necessary infrastructure and common areas in a month...” (Hogares Modernos / November 1971)

“The Instant City cannot be judged as success or failure, since as a personcentred environment it was what one made of it. It is perhaps similarly absurd to attempt to write this objective account of it since it was designed for subjective experience. The City was the people one knew and the things one did with them or without them ...

The project was most interesting in its attempt to create a social structure which maximises choice and reduces social contact/interference to the level acceptable to the individual, and in the flexibility which allowed people to act contrary to more basic ideas of Inslant City if they wished. The fact that it lasted four or five weeks, and was physically isolated from towns, meant that despite lack of services, it was in almost every respect self-sufflcient.

This lack of services and the smallness of the numbers (never more than 350 people) meant that as a guide to solving problems of physical servicing, it is of little use. It did however show the need for a structured information system (electric or not). And possibly, clearest of all, it showed that the social or design idea of Instant City need not suffer even if its physical forms are realised by staple-gun technology.” (Architectural Design /dicembre 1971)

Two kilometers from Seville (on the road to Utrera) a large ice-skating center has been created, with a large rink (56X26 m) surrounded by stairway seats (eight hundred and twenty spectators)and with all the complementary services: locker rooms, sauna, gyms, infirmary, restaurant-cafes, dressing rooms, etc. An amusing novelty, connected to the large rink, is the idea of two “ice roads”, two narrow (3.70 m) and long (120 m and 38 m) rinks that exit the main rink and, following a sinuous course, return to it.

All the roofs of the various parts of the complex are pneumatic domes: pvc membranes supported by a wire mesh “structure”, a structure that absorbs part of the buoyancy of the dome and transmits it to the peripheral concrete foundations. Parking for 400 cars.