Studio Drift: dream big and think of the improbable

Starting from their latest project, a swarm of drones flew like birds over the Atlantic Ocean, Lonneke Gordijn and Ralph Nauta recount how they always succeed in creating an intimate conversation between nature, cutting-edge technology and man. 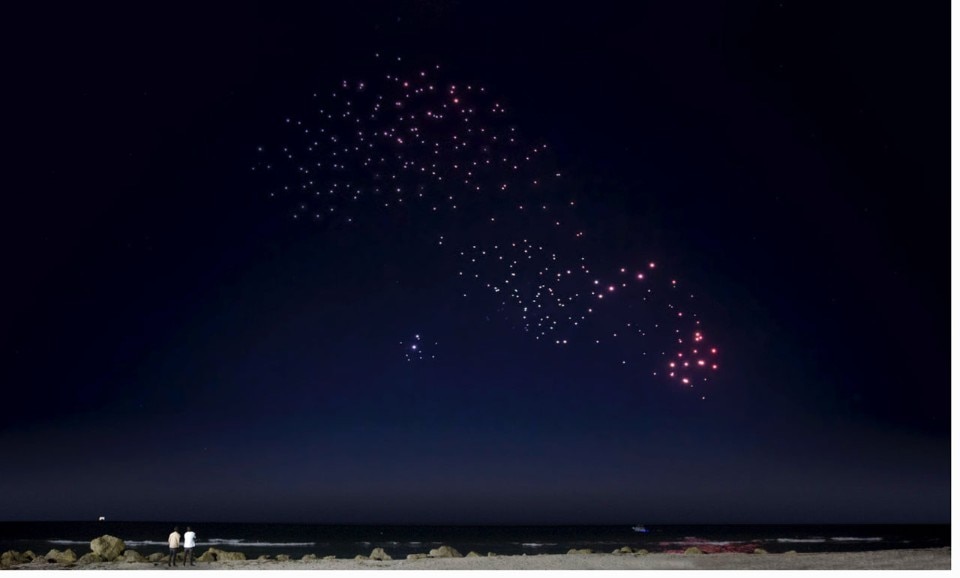 Lonneke Gordijn and Ralph Nauta are the founders of Studio Drift, one of the ateliers that adds a spectacular component to design as only few can. But not only. Established in 2007 in Amsterdam, Studio Drift, which has recently celebrated its tenth anniversary, has long been in the spotlight for its majestic and engaging light sculptures that stand out for their cutting-edge technology along with the poetical and charming final result conveyed in a singular and effective manner. Light is their tool, and technology, the primary means through which their dreams come true.

In late December, during Art Basel, in front of the Faena Hotel in Miami Beach, Franchise Freedom was held: a performance of great humanity even though the actors were robots. A swarm of drones flew like birds over the Atlantic Ocean: a radio-controlled flock, its subtle yet real and credible dance, recreated the passage of birds, as they moved together in flight. Alongside the beauty and the ambition that distinguishes this project – elaborated over an extended period of time – Studio Drift considers this adventure the best way to celebrate its first ten years of activity. In fact, Franchise Freedom may be considered a mirror of the society we inhabit, of the behaviour we must all adopt or respect, for various reasons, when we are not alone. The individual and the group are themes that have always attracted attention and debate as well as triggered people. This Studio Drift performance shares its ideas on the topic. Together with its partners Intel and BMW, who believed in this gigantic folly through extensive research, what Gordijn and Nauta aim to convey is coercive yet necessary complicity between the individual and the group, elevating their own winged machines to characters with souls and sensitivity, similar to humans. You may say, a synaesthetic dialogue between humans and the future. Their method is to create an intimate conversation between nature, cutting-edge technology – surprisingly free from all aloofness – and man while giving life to a fascinating synergy between the elements to emulate a totally unique scene. The creative duo looks to groups, the society in which we live and its social (and political) values as well as issues like individual as opposed to group freedom, the power of the many against the weakness of the individual, the equality of genders, the specific added value we can all contribute if we are free to express ourselves. Not bad considering the current state of the world.

How do your projects take shape?
Ralph Nauta: We often start a project with the question: what if we could... We like to dream big and think of the improbable. We do not want to create works that are a logical result of existing, easy or cheap as possible solutions. The idea must be new and challenging, or even better, unlikely to achieve at the starting point. I see it as a battle that we need to win. It’s a great personal victory to find solutions that seemed impossible at the beginning. This obviously sometimes takes a long time. Sometimes our ideas are ahead of technical solutions, and we have to work on them for years before they can be developed. Therefore, we have lots of ideas waiting for technology to catch up so we can finally produce them.
Lonneke Gordijn: When I studied at the Design Academy in Eindhoven it was a very conceptual education. I was interested in translating my ideas into sculptural installations and experiences without having to think of them as functional objects. Throughout my studies, I never created something because it was functional. This gave me the time to explore the conceptual side of creation. Both Ralph and I went to this school because we wanted to change the world and express our ideas. I am always thinking about how the mind works and how people perceive so-called reality. It is important for me to explore other options within a thought process and create the time in our busy existence to feel what I am doing and reflect on that.

What is your relationship with technology?
LG: In our work we use technology mainly to get as close as possible to and understand what makes an object truly come to life. Light, movement and the wish to survive are the main aspects of nature that define life and drive innovation. It is in our blood. I believe in objects, experiences and environments, in which these aspects are reflected. This is why we explore movement and light in our work. We use technology, not for the sake of technology itself, but because of what it can do to make a difference. We choose to show the technology that we develop and it becomes an aspect of the work, which naturally blends in with the experience. It is not hidden in a box.
RN: We believe that all solutions for all big problems that threaten our world already exist. This is not always, but often based on new technologies, invented by people who are not good at bringing their inventions to a vaster public. A big goal of ours is to culturally engage the tech industry with the creative industry for more sustainable futuristic developments. An example is teaming up with Intel and BMW to create a poetic swarm of drones instead of linking it to something negative. As humans we are trained to react to what influences us. Let’s all please keep dreaming of a positive future. It’s a self-fulfilling prophecy we need to be careful with.

What was the first driving idea for this project?
The flying sculpture, realized in collaboration with BMW, is a performative artwork at the interface between technology, science and art. It’s both a technological wonder and a breath-taking aesthetic experience – a good example of making the impossible possible and reflecting positively on new technology, which is, luckily, what our tech partners do well. Our fascination started with the starlings and the beauty of the swarm behaviour, and then the questions that arose. Why are these birds behaving like this, what is driving them? We see birds as a symbol of freedom, but while spending more time looking at these swarms of starlings, we started wondering if they are really free. Each bird will have to react to the movements of all their neighbours instantly, to function within the swarm. At the same time, every individual is trying to get to the middle of the group for their own safety. As a bystander, the patterns that they create together remain endlessly fascinating to watch. We captured this swarm behaviour earlier in an interactive light installation called Flylight, developed starting in 2007. This is done by an algorithm that generates autonomous reactions to environmental triggers: the lights move through a group of glass elements, as if they were a flock of birds. While developing Flylight, we started wondering if we could create this movement free of static boundaries, literally with no strings attached. Instead of moving the lights through the glass elements, they would have to move freely in a three-dimensional environment. And this is how we got to drones. When we started the idea in 2008, the technology needed was far from being advanced. Drones where hardly in development. Now, almost ten years later and thanks to our partners Intel and BMW, we are finally able to create this work.

With this project, in which way does Studio Drift question the delicate balance between the group and the individual?
Freedom is a concept that can be approached by following certain rules in a society that works for the majority of the group. This in itself is a massive contradiction. The individual has to make sacrifices to reach this state that is so wished for, and this compromised sacrifice is, in the end, what totally and utterly destroys our sense of freedom. This contradiction is beautifully translated into the swarming behaviour of starlings. What you see being performed in front of you when looking at a flock of starlings is exactly what we do all day, all the time. The group seems free but the individual is not. Real freedom in a group is an illusion of which we convince ourselves. We should be aware that the choice is alone and free against us in a social structure with sacrifices. Franchise Freedom questions this behaviour.

What is freedom for Studio Drift?
Freedom is an idea, a wish, a drive, something to strive for, a force that stimulates progress and evolution. Freedom is an important part of being alive, of being human. It plays a big role in our lives, but in the end, it is not a state of being totally free. But this human strives and the sacrifices and compromises we have to make in order to make it work for everyone is beautifully translated in the swarming behaviour of starlings. What you see being performed in front of you when looking at a flock is exactly what we do all day. It is life. And that is why we all understand, see and love to watch the swarming of starlings. As an artist, we try to reach a point where we have as much freedom and possibilities to create our work, but to get there we have to sacrifice a lot of time, sleep, friends and private life. In our minds, we make things more beautiful than they are in reality. We need that illusion to reach our goals. The same goes for freedom. The strive for freedom can generate our captivity in a system. This is something to be very careful and aware of.

An impossible dream you would like to achieve?
No. We will always strive to make the impossible possible. We just need to choose our battles wisely. Thinking of it may be one thing. Freeing society from the idea that adjustment in behaviour creates freedom. It’s an illusion.