With the decisive contribution of the illustrator Gris Grimley, the filmmaker overturned Collodi’s classic by creating a hymn to disobedience that betrays the original product – but isn’t this the very meaning of creative activity? 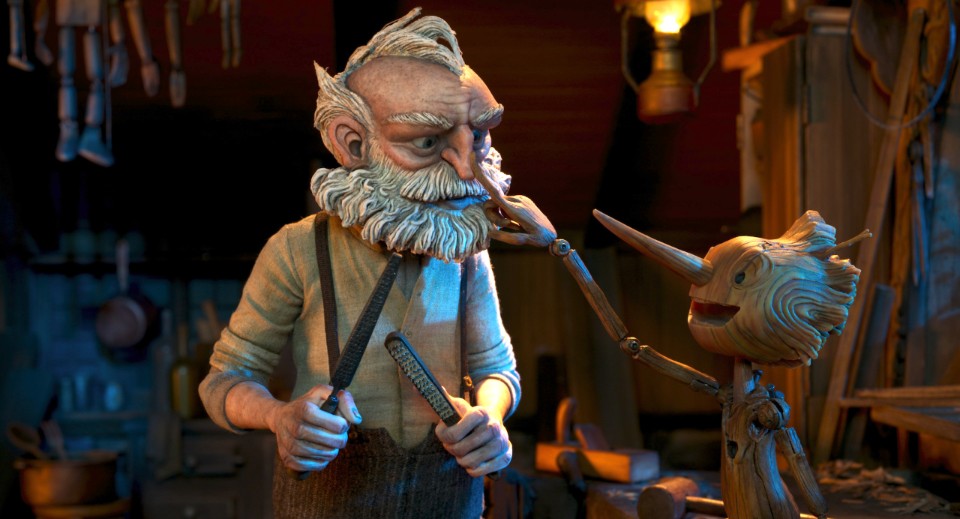 The classic is not a totem, but rather a field of experimentation. The classic is the canvas on which to vary, invent, modify and stage a new vision. It is the base to manipulate, subvert, change and destroy (if necessary). This is why Guillermo Del Toro’s Pinocchio (from 4 December in theatres and from 9 December on Netflix) is a masterpiece of style and a magnificent betrayal.

Del Toro thinks with his eyes before he even thinks with his brain, and for his (first) stop-motion animated film, he worked like a true film director. He brought together talents and coordinated them towards a single vision – that of a puppet world in which Pinocchio is the only one who doesn’t have strings.

The aim was to revolutionise everything and overturn the original story of a puppet who dreams of becoming a real boy, and in order to do so must become obedient, stop telling lies, go to school and behave like everyone else. Collodi’s story dates back to the 19th century, but the idea of order it conveys seems to have come out of a fascist precept. Therefore, Del Toro’s film does not encourage people to conform – on the contrary, it is a hymn to disobedience, to the non-aligned and to those who do not respond to any authority. That is why the idea of setting the story in Fascist Italy is perfect. In the period of maximum conformism, there is a character that no one can control.

The film starts in Italy, with the usual Tuscan landscapes as imagined by foreigners, but then it increasingly descends into the gothic. The environments, places and buildings slide towards the threatening, the unreassuring and the openly hostile – the rationalist palace in which the children are trained to the utmost obedience, i.e. to become soldiers, is fantastic and cartoonish.

The character design is the best part of the film, and it was curated by Gris Grimly, a children’s book illustrator who, between 2000 and the present day, has become famous for his style that combines the disturbing and the unsettling with the cosy and the comforting – a way to introduce children to the dark world, through a drawing style and ideas that create the perfect mix of repulsion and attraction for the unusual.

Among Grimly’s earliest works was indeed an illustrated volume of Pinocchio, for which he had conceived a completely new design. The puppet is not a polished and cleaned-up product as tradition dictates and as Disney later imitated, but rather a sketch of a wooden human being, created with fury and rage by a drunken Geppetto, mourning the death of his real son on a rainy night.

Bearer of chaos, a goblin with a broad smile, a madman’s face and protruding nails, spider-thin legs and only one ear. He looks much more like a log of wood than a puppet in a world where humans themselves are drawn (or rather “modelled”) as if they were made of wood. From Geppetto to the hierarchs, the characters all look carved out of wood, they are all made of the same material as him, only he seems closer to the rough wood than they are. Wilder, even.

Pinocchio as a story of death

These are ideas that go hand in hand with a plot in which Pinocchio, a bit like in the original novel, goes back and forth from a realm of the dead that is also conceived in an unpredictable way for an American film, drawing on poor New Age imagery (reminiscent of the cover of a meditation book) reworked by the refined style of Gris Grimly, with masked chimeras acting as fairies and skeleton-bodied rabbits carrying coffins when they are not busy playing cards.

The afterlife is covered in coffins and therefore in wood – just like the crucifix that Geppetto is working on and which, precisely because of the material it is made of, Pinocchio mistakes for a fellow character. Divine and earthly, institutional and rebellious, all of the same material.

Obviously, Grimly is not the only talented artist involved in dismantling and reassembling the story of Pinocchio. There is also Patrick McHale, the genius behind the animated series Adventure Time and then another (very sick) series that can be found on Netflix: Over The Garden Wall. He, too, is all childish imagination with a dark soul, and in the script he has written, even the fundamental assumption of Pinocchio is turned inside out to turn his own weapons against this story.

Guillermo Del Toro’s Pinocchio is in fact no longer a struggle towards life, the story of a puppet trying to become human, but rather a story full of death. Death is everywhere, starting from Geppetto’s real son who died right at the beginning of the film, to a finale that goes beyond the end of the characters’ adventure to show their serene departure due to old age. All with a tone that, in the best Del Toro style, knows how to combine opposites – the funereal and the joyful, that idea typical of Mexican culture according to which the passage to the world of the dead is not a tragedy.

Even a marginal character like the Fox (who in this version plays the role of Mangiafuoco) looks like a human spark of fire. Beside him, as a helper, is a monkey blind in one eye who, just like Pinocchio, is more like a sketch of a living being. The best description of this strange meeting point of different moods, in the end, was given by Grimly himself in an interview with the online magazine Inside the Magic: “I grew up wanting to illustrate comic books. But I found myself in a career as a children’s book illustrator instead. So I had to adapt. I guess my style was developed because I had comic book influences that I altered to fit in the confines of what is appropriate for young ages. That is why I have a dark yet whimsical style.”

Read also: The Shape of Water: through the imagination of Guillermo del Toro
Share