Romeo Castellucci: “there is no freedom in speech in this age”

Language as violence, the architectures of communication, recent elections and a rave at the business center designed by Kenzo Tange in Bologna: we met the Italian director. 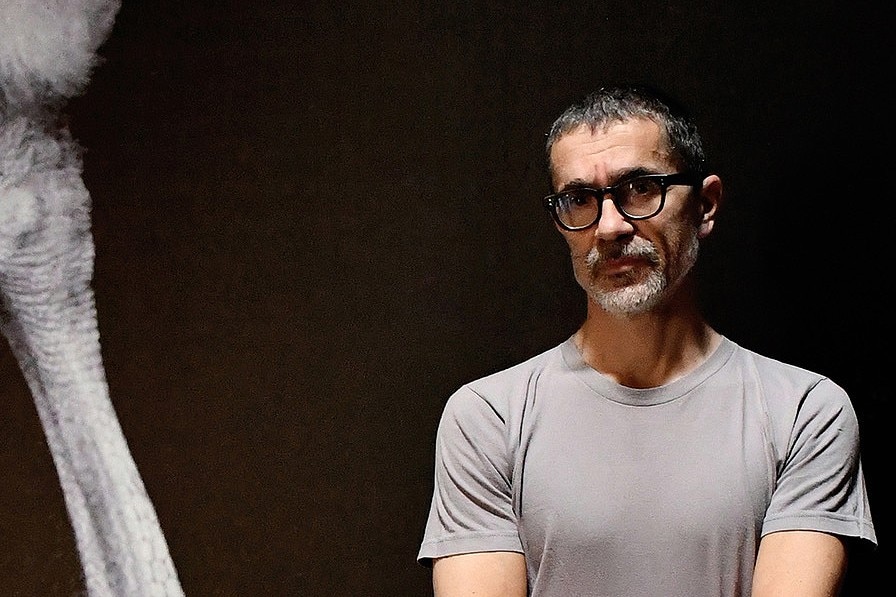 Romeo Castellucci – along with Societas Raffaello Sanzio – has been and is perhaps one of the most powerful creators of extraordinary visual mechanisms (including human bodies) operating on the world stage. Castellucci’s precision in placing his new works in the Zeitgeist is impressive. The precision that trivially belongs to all the greats of culture.

Recently, when he has redesigned his very latest installation Il Terzo Reich (The Third Reich – the title says it all) turning it into an outdoor rave in the spaces of the business center by Kenzo Tange in Bologna – whose surfaces show very quickly all the words of the Italian vocabulary – we thought it was a political, or rather a biopolitical statement.

So, we asked him. The first question came too long, because of the excitement. We are really sorry for that.

As we know, words can own a terrible magic form. This is a well-known statement in anthropology, I would even say an overcooked one. Il Terzo Reich somehow has its anthropological function, if only on Italian culture. You technically take all the words in the vocabulary – so all the tiles that make up the language and the written one, that of the law first – and with these you smash the viewer’s eye by projecting them at exaggerated speed onto a (let’s say) gabber base. Thus, the whole vocabulary embodies an unprecedented violence, if only from a retinal point of view.
Oh, it does. Let’s say that language in this work is an object, it is not an element to communicate. Indeed, quite the opposite, it suspends communication. It chastised it. It is a communication chastised by the literal massive use of language, pardon the pun. This language is also a way of showing the first law we are subjected to from childhood. So, language is a law. It is an unnatural thing. It is something that we have to learn if we want to be part of the human community. And so, it comes to us as an imposition. Psychoanalysts rightly say that we are spoken by language, it is a truth, but in this installation, there is a reference to the dark side of language. There is not only that side, because it is true that language is our common home, we would not be standing here talking right now, would we? But there is also this other side. And it is a dark and gloomy side, we know that. Because the very language is a form of violence.

Do you feel it, have you felt this violence in these weeks of Italian elections?
Well, it was felt before actually. I think that violence is widespread in the use of speech and information. Personal opinion as a citizen, not as an artist. Real power belongs to spirituality, to the intimacy of each of us. It is not the State, it is not the army, it is not the Church, it is those who hold the power of language who hold the power, in this age. This, however, is a dimension we have been immersed in for many years now.

Therefore – in the end – what exactly is Il Terzo Reich?
Firstly, it is a really heavy title. And these words should not be messed with. But this work is not a joke and so it is meant to reveal precisely what we were saying above. I can also tell you this: one of my inspirations for the title was this extraordinary book by a Jewish philologist named Victor Klemperer, who wrote a diary during the Nazi regime. Klemperer had the misfortune of being Jewish, but the good fortune of having married an Aryan, so he escaped the extermination camps. During the regime he wrote a diary about the Nazis’ perverse use of language, but not of the words, not of the content, but even of the meaning of the words, because the value of words changed every day. Hence, he wrote this diary entitled Lingua Tertii Imperii – literally “language of the Third Reich” – identified as language. Here, this way of entering people’s consciences and intimacy, subliminally I would like to say, is also there today, that is the violent use of language in the sense of social control.

And have you felt it growing over the years?
Sure, it has grown, of course.

Because it keeps expanding globally, let’s not just focus on the West.
Absolutely. And so does the way people communicate with each other. These are architectures that somebody designed, and so it is the architecture that matters. Architecture is the message, to quote our good McLuhan. In the end, contents are just excuses.

When you say architecture, you mean...?
I mean the way you write messages on your phone, for example, the way you send pictures. There are algorithms that control all that. I do not want to make any sort of diatribes, if it exists it means it exists. But these are inculcated communication systems, which somebody wanted. There is no freedom in speech, in my opinion, in this age. There is no more.

Look, there is, however, freedom of sound, maybe. The ears are freer than the eyes right now, or something like that. That is why I feel that even the soundtrack album from the installation, released for Xing, works on a softer, less stressed area instead.
What you are saying makes perfect sense. The sounds trace back to that field that can also be frightening, that of the vague, right? There is no word that can contain them. You have to hear the sound. And so, it is a prelinguistic, childlike sphere. Here, I would say that everything that is acoustic is childlike, right? So just in the etymological sense, the word “baby” means the one who is not yet in language, who has not begun to talk. So, going back to the soundtrack, precisely because it is an abandonment of words you enter an area where you are required to have an imagination, kind of like music, right? Hegel called it “the night of man”. There is also a dangerous side of music.

You are using the word/adjective “dangerous” a lot.
Well, yes, I am.

Apart from the fact that you have always been interested in it.
Oh, but it is essential. We are talking about entering a place without protecting yourself, right? What does “dangerous” mean anyway? Danger is a self-encounter. It is certainly not danger that comes from a thing or another human being.

In the new version of the installation, you distilled its sonic and rhythmic nature and then inserted it – you were talking about architecture earlier – into the most beautiful architecture of Bologna, which is the mid-1970s future madness designed by Kenzo Tange. The fairgrounds/business district, crazy.
Yes, it is. It is a beautiful location. I have to say that Silvia Fanti and Daniele Gasparinetti (deus ex machina of the international performance scene for 25 years with Xing, Ed.) are always very good at making the wrong places the right places. This is very important to me, and I have to say that regarding Tange Towers there is also a reference to Babel, if you like. They are primarily places where a power is administered and so that also has a hidden meaning, if you will. And yet it is also a square, that is also important. It is a square, we are outside a theater, we are in a public place.

And then there is the matter of calling the whole thing a rave, a term that even ended up inside the Italian parliament, because of the rave in the Viterbo area last year. Another dangerous word.
Yes. In fact, it is.

And so, in there you gave the audience the opportunity to do one more thing, not just to have a passive position, but a position of circulation. Within the lunar geometries of the business center, for example.
Well, yes, let’s say that the audience does exactly what they want, they can also walk away. It is very important to me that the viewer is abandoned, is alone. And it is right to give the viewer a problem, then he/she does what he/she wants with it.

After all, Scott Gibbons’ seemingly brutal sounds – you have been working with him for decades – are good sounds.
Yes, they are. But I think that they can often cause a sense of panic, of terror. But precisely because Scott is a good person, they are sounds that – despite the terror – are good.

Is there anything that has influenced your work, since you mention dark times all the time. Is there anything that has affected you from the last two years?
The pandemic? Look, unfortunately I will give you a disappointing answer: unfortunately, not. In the sense that I wasted time, I lived this time like an idiot, I did not put this experience to use. I have not been able to process it.

It does you credit.
Look, I was empty-headed. Really. Empty-headed for a year and a half, two years.

Well, a rest, come on, from a certain point of view.
But look, I would not know if a rest, I would not even call it a rest. It is this being so...

Gone to you.
Exactly.

Well, you must have gone somewhere...
I do not think so, you know.