There is no city like New York, especially in cinema. And Steven Spielberg’s latest film overturns its mythology. From the opening, a tracking shot of the rubble of a neighbourhood in the process of regeneration. 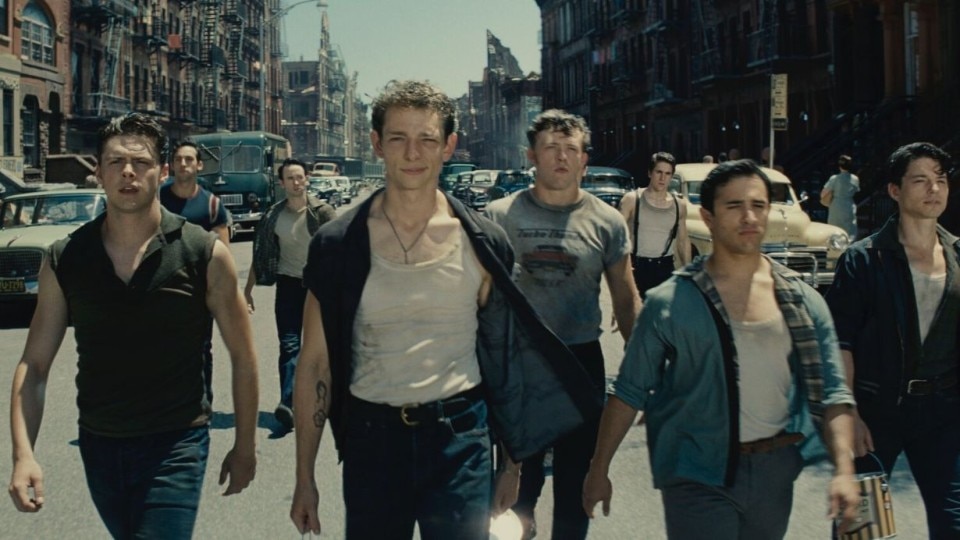 The mythology of the United States is based on its foundation and its growth, from the conquest of the west to the expansion of its cities. The largest metropolises have a personality shaped in music, literature, theatre and, obviously, film. Every major city has its own genre and type of storytelling attached by popular culture. And there is no greater city than New York, the protagonist and subject of so many films, always about hospitality, multiculturalism and progress, the idea that there is room for everyone in USA. Whether through crime, legality, the arts and dreams of great tomorrows, or hard work, films about New York’s myth tell of expansion, new neighbourhoods and the strong desire for a social rise that goes hand in hand with self-fulfilment.

This is why it is so important that Steven Spielberg opens his West Side Story with a tracking shot over New York’s ruins. These are the remains of buildings demolished to make way for redeveloped structures and centres (so much so that his film was not shot in the neighbourhoods of the original, which no longer had the architecture of the early 1960s, but in similar ones). A working-class neighbourhood becomes a middle-class one and those who live in it are slowly put on the outskirts. With this original backstory, West Side Story 2021 adds a political idea to that of 1961. The war between the Jets and the Puerto Ricans for the control over the neighbourhood takes place in the shadow of the appearance of another class: the dominant one. Both will be wiped out but lose time in a war between the poor. Much more than Robert Wise’s film, this is a film about the city and what big cities do to people. It is a film about New York, but not one of the usual ones.

The original film follows Romeo and Juliet’s model. In the two factions of the gangs, there is a boy and a girl who fall in love even though everything suggests they should not. No one can accept their love and a war breaks out on the streets of an almost metaphorical city. This is also found in the new film. However, if in 1961 the empty streets of the film were filled with young people dancing to the rhythm of knife fights and being free to move as if on a stage, this time the scenario is a living city, full of people. A real city, the real New York and not an abstraction of it.

Instead of welcoming, this New York hunts. Instead of expanding, it contracts and demolishes. The city of dreams is the place where they can no longer bloom.

The young protagonists fight and wage war against each other, but in this remake, control of their neighbourhood is an illusion.

“How I want to live in America!”, they sang in the original film, listing the fantastic possibilities offered by the United States to Puerto Rican immigrants. And they still sing it, the music is the same, but this time the character who sang it will change his mind. America is no longer the best place to realise one’s dreams, quite the opposite! New York is a city that discriminates against, hunts down and marginalises the poor. The antithesis of the American dream.

Hollywood has always drawn a precise equation between what cities are, how they evolve or what they allow and the spirit of the people who inhabit them. New York is the city that never sleeps and that of hard work, just as much as Los Angeles is the city of dreams, cinema and music.

At some point, even the protagonist dreams of being rich. In the original, this was a sign of her being fully American, with a healthy desire for social advancement, always with a better tomorrow in mind. However, in the new film, everything takes place from the scenic design and the spaces which she sings in, in an upper-class interior, with sophisticated furnishings that reflect her aspirations. The problem is that it is a fake interior, a set up showcase. The American dream is a scam, a showcase for the haves.

That all this comes from Spielberg, a filmmaker usually very close to classic cinema, and at the very moment he recreates a Hollywood classic, is really the last thing one could expect from the new West Side Story. The most powerful indicator of what is changing in the way the United States thinks and talks about itself.

The gentrified neighbourhoods become a symbol of how the few who have everything are increasingly challenging the many who have nothing or very little. The big, beautiful buildings, which were once America’s way of flexing its muscles, are now a sign of its problems. We wrote about it in Candyman. West Side Story, which places great emphasis on the city, the buildings, the neighbourhoods and the streets, the more it progresses, the more it unfolds in empty, dilapidated, decadent, vague spaces.

The problem is that it is a fake interior, a set up showcase. The American dream is a scam, a showcase for the haves.

At the beginning of the film, there is a very emblematic scene that there was not in the original one. After rival gangs compete for control over an urban space (a field where some have painted the Puerto Rican flag and others have defaced it), the policeman, who is there to monitor the problems caused by gentrification and changes in the neighbourhood, explains to the young people that they are the children of those who have not made it, that the families who have managed to make the social leap are no longer there, they are elsewhere. Positioning within the metropolis is everything, and there are those who choose it and conquer it, and those who suffer it.

The young protagonists fight and wage war against each other, but in this remake, control of their neighbourhood is an illusion, they are not masters of their own destiny. New York is no longer the city of those who live there, even when they are immigrants, but of those who dominate it. Cities tell us about the people who live in them. This time they tell of a people who take from those who do not have, to give to those who already have.

Read also: Diabolik takes over the Mole Antonelliana in Turin