“Where is the victory?”

Football is probably the most popular sport in the world, and its origins go way back in history. Its appeal has also conquered artists. So, let’s take a look at some paintings that tell about and celebrate this game. 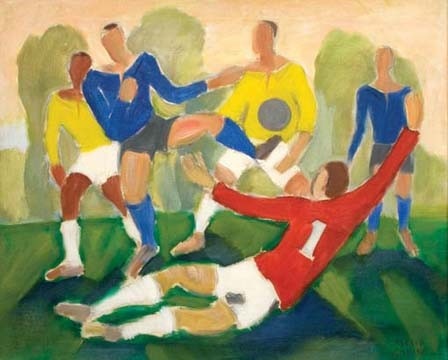 Fifty-one matches, eleven cities, and twenty-four teams representing their nations in the UEFA European Football Championship. Through various rounds, groups, direct eliminations, eighths, quarters and semi-finals, an intense final was played on July 11, revealing the secrets of one of the most popular sports. Every nation followed the games holding its breath, hoping that its team would score. But the winner was Italy, a nation that has this game in its blood. A nation that loves, prays, and cheers. From the national championship to the world championship, football is the most watched sport in the world. Tension, strategy, tactics and techniques provide a unique experience.

Of course, painting has portrayed sport, too, and especially football, from the Olympic narratives of 19th century painters to more contemporary ones, in which various artists have tried to portray its appeal. Chronologically, the first records of football can be traced back to the 15th century B.C., in the Far East, under Emperor Xeng Ti. A spherical object made of vegetable substances was part of the military training. Centuries later, football also came to Greece, where the training ground was already split in two. However, it was in Italy, during the Renaissance, at the peak of the Medici era, that this sport took on the playful and competitive characteristics it still has today. The rules already provided for the formation of teams, which were composed of varying numbers of players.

In King Lear, Shakespeare has Kent say: “Nor tripped neither, you base football player?”. It was England, at the end of the 20th century, that introduced the contemporary rules of the game, and Caesar's invasion of the island probably played a major part in it. Brazilian artist Mario Zanini (São Paulo 1907-1971) depicted the most important and exciting moment of the game in an expressionist style, all focused on the avant-garde. In the painting Football, the goalkeeper's back faces the viewer, letting the iconic shirt with a red number one on it occupy the foreground. A faceless player tries to score. Behind him, we see the defenders, almost defenseless, as if the destiny of that goal kick had already been written. The scene is colorful, perfectly balanced by the body of the goalkeeper, who shifts all his weight to the right as the scene on the left is already full of other figures, thus restoring symmetry towards the player furthest back, who is waiting to rejoice.

Read also: A project created to document chaos, “because we live in a strange world”

More traditional and less intense is the painting by Henri Julien Félix Rousseau, another well-known artist. In Les joueurs de football, the painter depicts the more playful side of the sport. The painting, in a somewhat naive style, depicts four characters dressed in funny striped uniforms. The painting does not portray the game of football, but a sport that, although different, is very similar – rugby. This was one of the last paintings by Rousseau, who at the time was painting mainly exotic scenarios. A simple, near composition, where the natural element frames the subject. The characters seem unreal, as they are portrayed without correct proportions. Flat bodies, stereotypical faces, almost anatomically improbable (their legs are very short and the bust are disproportionately big), and above all their bodies cast no shadows. The work was exhibited in 1908 at the Salon des Indépendants, where it was a great success.

An almost cubist work is instead that of the English painter Paul Nash, made in 1935, where his evolution as an abstract painter takes shape: The Footballers prefer Shell. The drawing in the center is framed by two sentences, one of which is the title: “You can be sure of shell. Footballers prefer Shell”. Straight, balanced lines, an almost architectural study of the scene seems to be the real subject. The figures fade away, leaving room for the real subject, the one that undergoes the action: the ball. The English artist presents us with almost a soft-toned grisaille. Cold, hard, severe, and violent. The object enters the net at full force and it does not matter who is the author of the shot, only the speed and thrust of the ball.

Marcello Marchesi, Italian writer, director, and screenwriter, summed up the idea of football in playful words: “I must take a cure for football/ learn what it is/ and try to understand the secrets/ of the Championship/ or I will be banned/ from the uncivilized life.” A crazy passion that sometimes leads to fanaticism and degeneration – just think of the clashes after the England-Italy final. But in reality, football is a great sport made of hard work, perseverance, fun, and love.