After months of curfews and restrictions, we are rediscovering what it means to experience the night. Let's look back at the work of two great French painters who painted moving nocturnal landscapes. 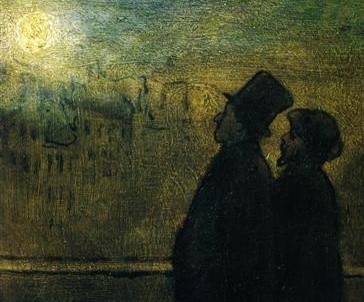 Life and all its everyday activities are finally back. Museums, restaurants, trips, not to mention the long-awaited nights out: “Thence we came forth to rebehold the stars” (Dante, Divina Commedia, Inferno XXXIV, 139). The night has always fascinated humans, enveloping everything in its darkness and erasing all differences.
The term comes from the Latin nox, which in turn comes from the Sanskrit nac, meaning the time when light disappears. The absence of the sun and its rays, replaced by the darkness of the shadows, has always been both a source of fear and fascination for humans. Its silence and its elements, such as the moon and the stars, have always been and still are a source of inspiration for great authors.

Read also: The portrait of Dante

Honoré Daumier was born in Marseilles in the early 1800s, and painted one of the most exciting nocturne paintings ever. Better known for his caricatures, the artist “had a perfect mastery of his new craft! The mark, the touch, the impasto are typical of a master who could stand beside the other masters of his time without being afraid of feeling embarrassed, even though he did not surpass them or teach them something. And since these masters were among the most eminent of the contemporary French school, such as Delacroix, Decamps, Millet and Coubert, it is easy to understand the importance of those first pictorial steps. Later on, the best artists of France: Manet, Degas, Cézanne, and even a little Renoir, would appear not only influenced by him, but even his disciples”. This is how Ardengo Soffici, a famous Italian writer, poet and painter of the 20th century, described him.

In The Nocturnal Travellers, Daumier describes a quiet walk where two men, probably strangers, meet and stop to admire a beautiful full moon together. As we were saying, they are two strangers, and their clothing is very different. The man in the foreground is taller and more elegant, he has a confident posture and a top hat that outlines his silhouette. The other man, his companion in adventure and wonder, wears a cap and his posture is more awkward, but the night makes everyone the same, and both stare in wonder at the moon. Being one of the pioneers of Realism, the artist described reality in a detached way, in a polemic/ironic way, illustrating the difficult life of poor people. Daumier's best-known works are those of social denunciation such as The Third-Class Carriage. He was a great disseminator of ideas, a journalist and cartoonist of political satire who reacted to current events, but when making this painting he's calmer, and becomes romantic and dreamy when depicting a moment that is always the same for everyone.

“Great naked women erasing the desert / this world is under the dominion of glorious flesh. / Everything in an instant is reduced to abandonment / of the reflection of a skirt in an empty mirror. / To know the shape and weight of her breasts / the most beautiful one in the morning hides in her own arms.” This is how the poet Paul Eluard described Paul Delvaux. Delvaux, who was a surrealist painter, exaggerated metaphysical restlessness by following Magritte's pictorial narrative. He painted landscapes, desolate and mysterious, with skeletons and shadows, classical architecture, naked women and figures posing in indefinite space-time dimensions. In 1931, he painted a nocturne painting that recalls the extreme classicism of the Fontainebleau school. Two women, on different planes, talk to each other only using their hands, and they seem eager to show themselves to the spectator. Sensual and daring, they give space to two men who are whispering words in each other's ears. To their right, a woman with bare breasts walks towards them. They're sensual lovers, enigmatic figures reminiscent of a grandiose and elegant past, but in this work they represent the secrets of the night, when everything happens in great secrecy.

Another painter, Vincent Van Gogh, said: “I often think that the night is more alive and more richly colored than the day”.