The portrait of Dante

On the 700th anniversary of his death, let's narrate the story of the Supreme Poet through the portraits of the greatest painters. 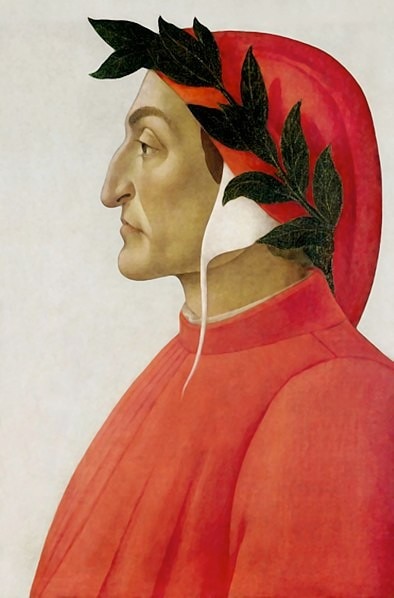 “Worldly repute is but a breath of wind, which cometh now from here, and now from there, and shifts its name, because its quarter shifts”. In Purgatory Canto XI, Dante falls into temptation of pride by alluding to his fame as a man of letters. Shortly after his death, Dante was already celebrated as a great poet and philosopher thanks to the anecdotes recounted by Giovanni Boccaccio in his Trattatello in laude di Dante.

Crooked nose, prominent chin, sharp edges, an unmistakable profile. This is how Sandro Botticelli celebrates the greatest poet of all time, the “father” of the Italian language. In his depiction of the Supreme Poet, he was inspired by the models handed down by fourteenth- and fifteenth-century iconography, starting with the fresco of the Giotto school in the Bargello chapel, without forgetting how Boccaccio describes him: “the poet was of medium height and in his later years he walked a bit hunched, with a serious and soft allure. He was always dressed in the most decent outfits, such as befitted his ripe years. He had a long face, his nose aquiline, and his eyes large rather than small. His jaws were large and his lower lip protruding. He was brown skin, his hair and beard were thick, black and curly, and his countenance was always sad and thoughtful.”

A severe, authoritative profile, where the laurel crown, symbol of glory, frames the scarlet hood. The painter had a boundless veneration for Dante. A passion that absorbed him so much that he neglected all other activities. Vasari recounts: “[...]being a whimsical person, he commented on a part of Dante, made illustrations for the Inferno, and put them into print; over all of which he wasted a great deal of time, and since he did no other work he brought infinite disorder to his life”.
The artist made the drawings of the first nineteen cantos of the Divine Comedy for Baccio Baldini's engravings. He then set to work on a huge project that presumably lasted throughout the 1490s. The ninety-two parchments with illustrations of the poem, commissioned by Lorenzo di Pierfrancesco de' Medici and now kept in Rome and Berlin, testify to his genuine devotion to the work.

A severe, authoritative profile, where the laurel crown, symbol of glory, frames the scarlet hood... (Botticelli) had a boundless veneration for Dante.

Vasari further recounts: “It is also related that for a jest Sandro accused a friend of his of heresy to the vicar. The friend appeared and demanded who accused him and of what. Learning that it was Sandro who said that he held the opinion of the Epicureans that the soul dies with the body, he asked to see his accuser before the judge. When Sandro arrived he said, “It is true that I hold this opinion of this man, for he is a brute. Do not you yourselves think him a heretic, since without any education, and scarce knowing how to read, he writes a commentary on Dante, taking his name in vain?”. A further testimony to his great devotion.

Another extraordinary painter who portrayed Dante, with the same inspiration as Botticelli, was Agnolo di Cosimo, better known as Bronzino. Between 1532 and 1533, according to Vasari, Bartolomeo Bettini, a Florence-based intellectual, asked Bronzino to paint a portrait of the great poet. A tribute to poetry and literature. Dante is here depicted holding his most famous work, the Divine Comedy. He does not look at the viewer but rather turns towards the landscape behind him, which is none other than a representation of Hell:
“Midway upon the journey of our life
I found myself within a forest dark,
For the straightforward pathway had been lost”.
The whole work is extremely faithful to the story. Detailed and simple.

Read also: Which are the world’s most visited museums?

The great poet does not only catch the attention of Italian artists. Eugène Delacroix, a 19th-century French painter, took inspiration from Inferno canto VIII to paint The Barque of Dante, where Dante is accompanied by Virgil. The two poets are represented on a small boat. Phlegyas, the keeper of the swamp in the fifth circle of Hell, leads the boat. The painting depicts the city of the Dead, surrounded by the marsh, encircled by walls of glowing metal. The damned who attack the boat are the wrathful and sullen, serving their eternal punishment in the swamp. Dante seems intimidated by the sight of the damned emerging from the mire and Virgil, his guide, comforts him. Delacroix strategically chose Dante's subject. The work was destined for the Paris Salon of 1922 and the imagery of the Divine Comedy had become one of the main themes of Romanticism.

Dark tones, cold colours in most of the surface of the swamp and sky while in the foreground we find warmer colours, like Dante's hood and Virgil's cloak. On the left are the orange-red glow of the fire consuming the city of the Dead. The light revealing the bodies of the characters comes from above, as if the scene were being told on a stage, and paints the drapery and anatomies in a grazing manner.
Seven hundred years after his death, Dante still inspires many people. He was a master of literature who, even today, offers us essential, true and relevant metaphors for life.