Productive, essential and always changing: this is work. Starting from Pellizza da Volpedo's painting, let's narrate the courage of the many women and men who fought for a different future. 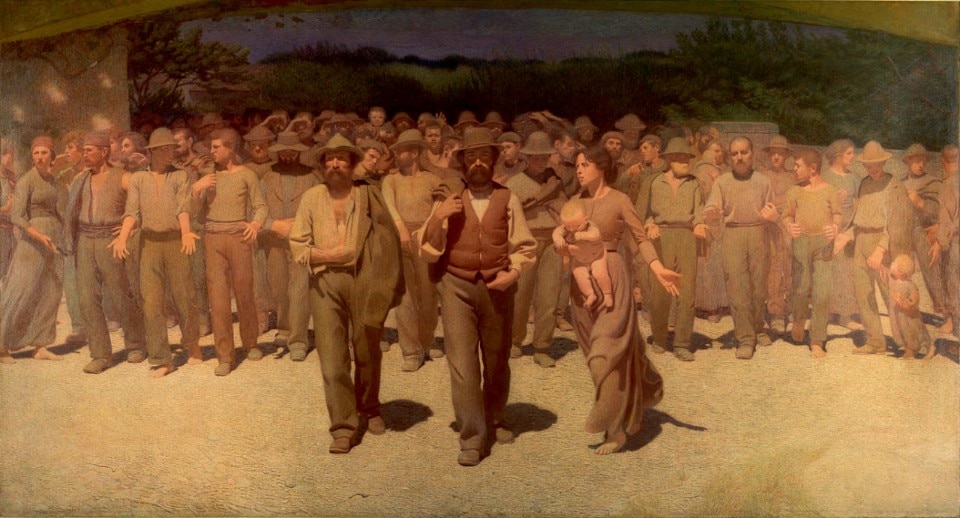 “It occurred to me once that if they wanted to crush, to annihilate a man totally, to punish him with the most terrible punishment, so that the most dreadful murderer would shudder at this punishment and be frightened of it beforehand, they would only need to give the labor a character of complete, total uselessness and meaninglessness.” We could start with this passage from Fyodor Dostoevsky's Memoirs from the House of the Dead to talk about work, where the recently celebrated first of May takes us back to Illinois, in 1866, where Labor Day finds its roots.
Precarious, parceled out, underpaid, temporary, and exhausting. This is work in 2021, both before and after the pandemic.

Every age has a special art. The artist must study the society in which he lives and best represent that in his art.

“Every age has a special art. The artist must study the society in which he lives and best represent that in his art.” It is with this in mind that Piedmontese painter Giuseppe Pellizza da Volpedo prepared to paint The Fourth Estate, a work that became a symbol of 20th century painting and society. After witnessing a workers' strike, the artist began to make a series of sketches dedicated to that event, to the struggle of that moment. From those people's courage and heroism comes the greatest manifesto that the proletariat can boast, a painted monument to courage.

Read also: The dance of life

The word courage comes from the Old French corage, which in turn derives from the Latin cor (heart), where it was believed that all feelings resided and that it was the source of the deepest desires of man, a sort of heating chamber for the vital spirits of the body.
The painting depicts a group of workers marching in protest in a square, most likely that of Malaspina di Volpedo. Men and women struggling, with the common goal of making their lives more dignified.

Three figures can be seen at the center of the painting. A woman is carrying a child in her arms, and her hand gesture incites the group of people behind her to proceed, the drapery of her clothing follows the movement, a heroine who at the same time represents a religious motherhood. In the middle is a young man, proud and determined, who is painted with one hand in his pocket while the other carries his jacket over the shoulder in an extremely elegant way. On the far left is an older man, looking tired but determined. Three figures, three ages, striving to give shape and security to their lives in compliance with the four cardinal virtues: prudence, justice, fortitude and temperance.

The workers are marching together, those at the head of the march are illuminated by a vibrant light, while in the background the figures are obscured and blurred. A metaphor, where the workers emerge from the darkness of ignorance, a pictorial realization of revolutionary hope.

An imaginary straight line joins the last characters in the background, while the curved line represented by an imaginary architecture, which arises at the sides of the work and closes over their heads, gives thrust and strength to the painting in its inexorable march. Originally, the painting was to be entitled Hunger Ambassadors and then March of the Workers, but Pellizza da Volpedo later chose to call it The Fourth Estate to refer to the working class as identified during the French Revolution. The work emphasizes the fortitude of the characters, on their ability to face difficulties while realizing themselves. This is heroism, courage, which is not just about the great men on horseback, but something we can all aspire to.