The dance of life

To merge, to get together, to know each other, to live – that's what dance is. Let's retrace this theme in painting as an emblem of life. 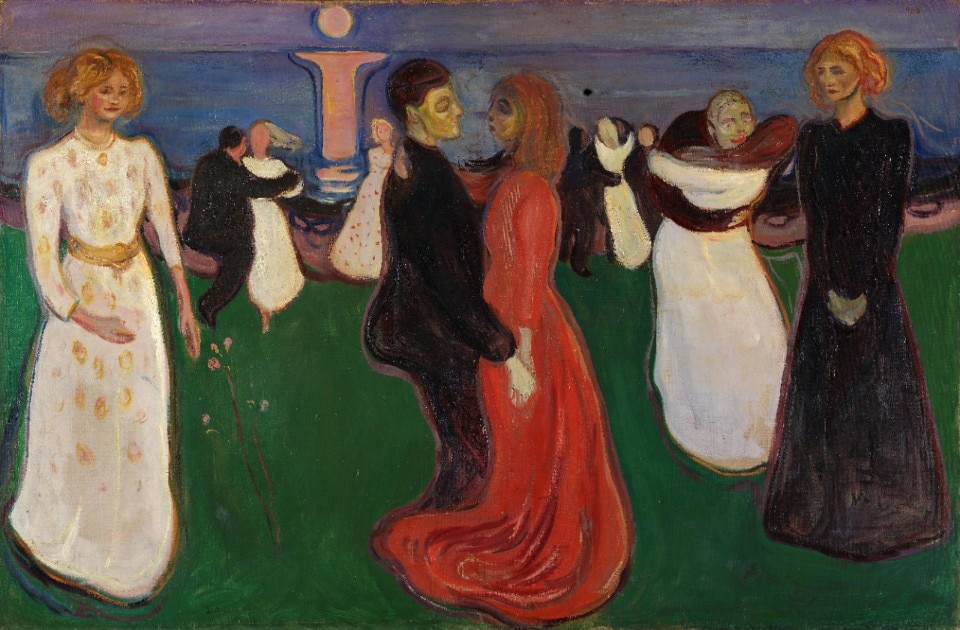 Distance is a measure that divides two objects or two bodies in a place. It is a strange measure, especially difficult to accept and maintain during this overwhelming and difficult year, to say the least. We have changed habits, we have been isolated from a kind of sociality to which we were used, finding ourselves rethinking our daily lives and our relationship with each other. We gave up hugs, handshakes, dinners, and dances. This is how we were used to living. In dance, distance seems almost inappropriate and foolish, and we had to give it up both as public and protagonists.

Edvard Much represented dance as a tight embrace and called it The Dance of Life. “I danced with my first love; it was a memory of her. The smiling, golden-haired woman enters the scene and wants to pick the flower of love, but it doesn't want to be picked. On the other hand, she is dressed in black and looks sadly at the dancing couple - an outcast, just as I was expelled by their dance”, wrote Munch. The painting is set in Norway during the mid-summer celebrations, better known as St. John's Eve, traditionally considered to be the festival of witches, where people gathered on meadows or along the coast, exorcising these magical figures through dance. On either side of the work, we see hope and sorrow, a woman dressed in white and a woman dressed in black, linked by a third woman dressed in red in the middle of the painting.

The woman is charming, fascinating, a witch, she overwhelms her dance partner in the temptation of love. “A saint, a whore, and an unhappily devoted lover”: this is how Munch describes the same woman he depicted three times in the painting. Only the clothes change. It is the portrait of Tulla Larsen, who abandoned the painter for another, less talented one: Gunnar Heiberg.

...life as only made of passions, love, vices, where the relationship of cause and effect always stems from the woman. A new Eve, a contemporary Garden of Eden, where dance is only the symbol of a life of emotions.

The two women show the way to read the painting: the beginning is hope, and the end is the pain of every relationship, and at the center is the passion and the union of bodies. The warm color of the red dress, as in ancient symbolism, envelops and overwhelms the man, almost making him a prisoner: “In the middle of a meadow one bright summer evening a young priest is dancing with a woman with flowing hair—They are looking into each other’s eyes—and her hair entwines his head—Behind swirls a wild human mass—fat men biting women on the neck—caricatures and strong men embracing women”. Munch's description sees life as only made of passions, love, vices, where the relationship of cause and effect always stems from the woman. A new Eve, a contemporary Garden of Eden, where dance is only the symbol of a life of emotions.

Instead, what 17th-century French artist Nicolas Poussin describes in A Dance to the Music of Time is another life, another dance. A group of women is dancing in a circle, and those in the foreground are facing the viewer. These emblems of life correspond to a reality where poverty holds work's hand, work holds wealth's hand, wealth holds lust's hand, and lust starts the circle again, holding poverty's hand. Seasons of life and seasons of the year cadence the passage of time. The winged figure on the right is in fact time, which gives rhythm to the circle, the creator of the music for which the women dance.

In this painting, too, there are two characters at the sides watching over the scene – two putti, one with an hourglass and the other blowing soap bubbles, two elements inserted by the artist to recall the fleeting nature of time. An apparently light time, amusing and entertaining, where everything is creation and destruction, where everything is just a dance, a strategy of movement. Life is therefore a union that does not contemplate distance, where the rhythm of movement is dictated by human connections.