From Naples to Messina: the journey of a painting by Caravaggio that just landed in Madrid. 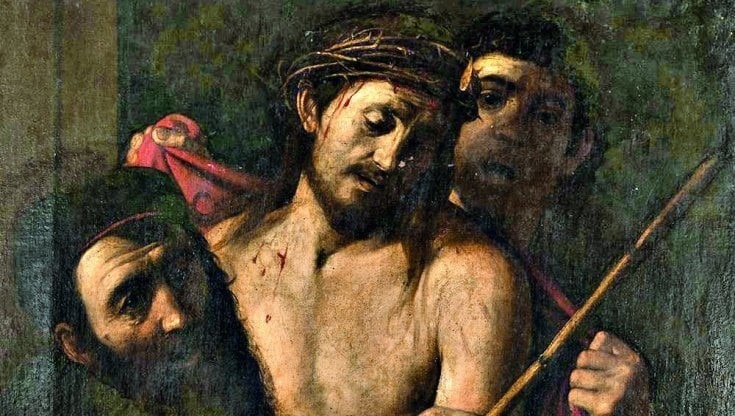 Around the end of 1608, to escape justice, Michelangelo Merisi, better known as Caravaggio, left Malta and Syracuse to hide in Messina. Historical sources tell us that Prince Andrea Valdina owned an Ecce Homo painting, and when he died, his son Giovanni inherited all his belongings and inventoried them: there also were two beautiful works of art, a Christo wearing a cross around his neck and an Ecce Homo by Caravaggio, both measuring "5 palms by 4". Francesco Susinno, the author of The Lives of Painters in Messina, narrates the artist's presence in the city and pays great attention to his mental state. He defines him as "a man with a restless, contentious, and turbid mind", obsessed by the idea of being executed, betrayed, and brought to justice just like the subjects of the works he painted during the time he spent in Messina.

During his stay, the artist painted four canvases on the theme of the Passion of the Christ. Among them, there are apparently three different versions of Ecce Homo, two of which are part of private collections, and the third one was attributed to Alonzo Rodriguez, a follower of the artist.

A few days ago, in Spain, a painting was blocked right before it was put up for auction because it was suspected to have been painted by Caravaggio. It had initially been attributed to the school of José de Ribera, better known as Spagnoletto, and had attracted the attention of many antique dealers, collectors, and scholars. However, it was far too skillfully painted to be the result of a school or a workshop. This forgotten painting probably comes from either Caravaggio's Sicilian or Neapolitan period – experts still have differing opinions. In 1605, Caravaggio worked in Naples for Cardinal Massimo Massimi. In 1672, Giovanni Pietro Bellori wrote in his book The Lives of the Modern Painters, Sculptors, and Architects that "Michel Angiolo Merisi da Carvaggio... painted an exceptional Ecce Homo for the Massimi family, and it was taken to Spain". This could prove that the painting in Palazzo Bianco in Genoa is a forgery, and justify its presence on the Iberian peninsula.

“I, Michel Ang.lo Merisi da Caravaggio will paint Massimo Massimi a painting of the same size and value as the one I have already done for him of Christ's crowning for the first of August 1605. This contract was written in my own hand on June 25, 1605”. In no time at all, the news that this extraordinary painting was taking part in the Ansorena auction house spread around the world, bringing the situation to the attention of the state.

On April 6, a short text was sent by email to all potential buyers: “Hello, I am sorry to say that this lot has been withdrawn of the sale, Regards”. Forced not to give any further information about it, the experts at the auction house had to withdraw a work they did not understand at all. The expression on Christ's face recalls with extreme immediacy the contrite face of David with the head of Goliath, while the Young Sick Bacchus in the Galleria Borghese in Rome recalls the figure of the man behind Christ in the painting in question. These details and figures narrate the technical and semantic wisdom of a great artist.

The artistic themes that Caravaggio offers us are the ante litteram Pasolinian stories of street kids, swindlers, tarot cards, The Fortune Teller, the pain of the Boy Bitten by a Lizard, the precariousness of human life in the Basket of Fruit, the illness of Young Sick Bacchus. But it is in the religious scenes, where he tries to create a direct and human contact between the people and the Church, between the commissioners of the paintings and his tormented and brilliant soul, that Merisi shows his greatest strength. His bodies encompass experience, desire, making their own ability to project themselves far beyond the limits of the divine carnality of the experience of those bodies, in a contrast that establishes the characters of his canvases through a chromatic force articulated in a formal beauty that only Caravaggio was able to express with a hitherto unknown language. When and where will we see this canvas on display? We will have to wait for the restoration and a more careful study, because at the moment, at least in Europe, museums are still (unfortunately) closed.

Read also: “Then was the fear a little quieted”