To pay homage to the new season, which has been timidly warming the European continent for a few days now, let’s discover the secrets of one of the most famous works of art of all times. 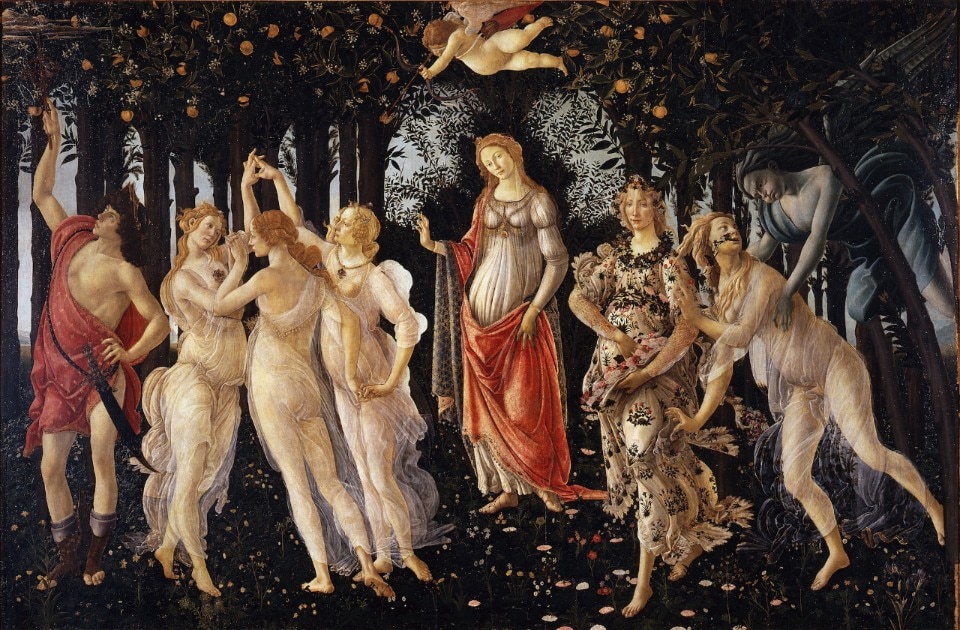 Sandro Botticelli painted the allegory of a season that over the centuries has become the most representative, static and iconic image of an extremely multifaceted time: La Primavera.

The painting was named La Primavera (“Spring”) by Giorgio Vasari, the writer of the first biographies of Italian Renaissance artists. According to the critic, the work represents an allegory, that is, the reign of Venus, where the iconography illustrates the neo-Platonic philosophy of Marsilio Ficino. “For true love is nothing other than a certain effort of flying up to divine beauty, aroused by the sight of corporeal beauty” (On the Nature of Love, VII, XV).

Venus and Cupid are portrayed in the center of the painting, while the man on the left, also according to neoplatonic philosophy, is young Mercury wearing winged sandals. On the right is Zephyrus, the west wind and the bringer of light spring and early summer breezes, who’s chasing and kidnapping the nymph Chloris, who after their union was transformed into Flora, the Roman goddess of the flowering of plants – and in fact, we see her busy spreading her flowers. The three dancing maidens, dressed in thin transparent veils, are the Three Graces.  With their presence, they support the figure of the goddess of beauty who arouses earthly passions by transforming them into contemplative activities. In fact, the goddess is surrounded by trunks and leaves, which crown her almost like a saint, like the Virgin Mary, causing the foliage of the trees to bend almost to create a sort of halo. The woman encircles the burgeoning of her belly with one hand, while holding her right hand up in greeting or blessing. Cupid, blindfolded, flies above the goddess like the dove that in classical iconography represents the Holy Spirit.

Every detail points to a wedding – orange blossoms on the trees, cornflowers, daisies and forget-me-nots on the ground. This indicates a different and possible interpretation, namely the dynastic one. In fact, the work seems to be a wedding gift for Lorenzo di Pierfrancesco de’ Medici and Semiramide Appiani. Their faces appear clear in the representations. Mercury looks very much like Lorenzo di Pierfrancesco while one of the three graces, the one in the center, is very similar to his wife, Semiramide, who in fact looks at him and seems to be the target of Cupid’s arrow. Semiramis covers the clothes of the grace called Castitas and, considering the times, when love meets chastity the result is marriage. Other elements lead to this interpretation, further tightening the link between the work and the Medici family – the orange trees. According to some hypotheses, the Medici Balls, represented in the heraldic coat of arms, refer to the trade of bitter oranges of the Medici family with the Orient, having a double symbolic function, representing also medicinal pills. Other references to the family are found in Mercury’s robe, decorated with small flames, an iconographic attribute of Saint Laurence, and it is always the same figure of Mercury that brings us back to the Medici family: in fact, the Roman god is linked to medicine just like this famous family.

from carnal love linked to the awakening of the senses of spring, to the season par excellence of sacred unions. Moreover, the heads of the characters of the painting create undulating lines that give rhythm to the work.

It’s as if this rhythmic and elegant scansion put the characters on a theater stage, making them tell more stories supported by the many details of the painting. “Botticelli was so imaginative that he could never run out of ideas to tackle the most difficult problems of painting. His means, it is true, were not always as great as his will, but his boldness put him in an exceptional position”, said Joseph Archer Crowe.

Read also: These boots are made for…
Read also: In the blue, painted blue