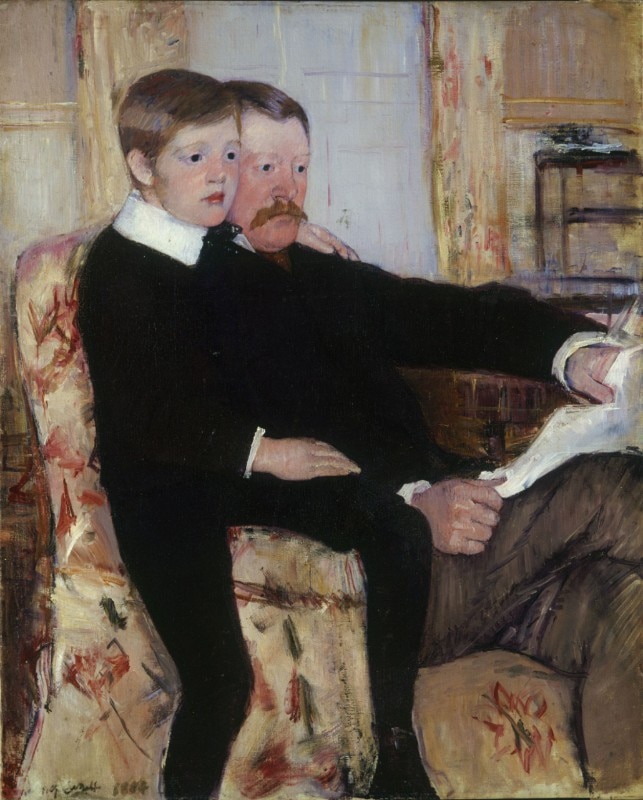 In 1871, the Catholic Church proclaimed St Joseph the protector and emblem of fathers, and even before he was proclaimed saint, he was celebrated on 19 March – and Father’s Day was established in his honour.

Throughout the history of art, many works have been dedicated to the father figure, and through religious, mythological, or simply realistic themes, they have shown the bond between father and son. One of Rembrandt Harmenszoon van Rijn most famous works was inspired by the parable of the Prodigal Son, appearing in Luke 15:11–32. The parable, also known as the Forgiving Father, tells of a son who, after squandering his wealth, returns home to his father asking for forgiveness and shelter. The artist, with extreme simplicity and objectivity, portrays the son wearing worn-out clothes, kneeling before the father whose money he has squandered.

Read also: These boots are made for…

The loving reaction of the man says it all. This is where the new story begins. With its back to the viewer, his head turned to the right in search of comfort and forgiveness, the boy is placed at the level of a possible womb – not a random choice, as the Dutch artist paints him as almost bald as if he were a newborn child. The image is amplified and takes on a deeper meaning when we look at the father’s hands – different from one another, uneven, they’re the fulcrum of the whole composition. The left hand appears smaller, more feminine, and delicate, while the right one is stronger, more masculine, and older, a metaphor that shows the divine greatness of God, who’s the father of everything, and motherhood and fatherhood coexist in him. The painter had already tackled the same subject when he was young, boldly identifying himself as the son squandering his father’s possessions, whereas this painting was made much later. It was in fact found in the flat of the painter, who had died in poverty. It had probably been painted without having a specific client other than the painter himself, almost as a sort of reflection that comes at a time of deep solitude after a life of great success.

“Dearest Father, you asked me recently why I maintain that I am afraid of you. As usual, I was unable to think of any answer to your question, partly for the very reason that I am afraid of you, and partly because an explanation of the grounds for this fear would mean going into far more details than I could even approximately keep in mind while talking. And if I now try to give you an answer in writing, it will still be very incomplete, because, even in writing, this fear and its consequences hamper me in relation to you and because the magnitude of the subject goes far beyond the scope of my memory and power of reasoning”. Franz Kafka, in his Letter to his father, describes a different and more nuanced relationship that was not always simple or happy. And Mary Cassat, an American painter at the turn of the 19th and 20th centuries, does the same.

In the painting that depicts her brother Alexander, who at the time was President of the Pennsylvania Railroad, with her son Robert Kelso Cassat, the painter tells us about a complicated, almost non-existent relationship, by depicting the man sitting in a single-seat armchair decorated with a floral fabric. The man is reading a newspaper, while his son is sitting next to him on an armrest, a little embarrassed, perhaps because he was asked to embrace his father and to sit beside him in an affectionate pose for the painting. The boy’s expression does not hide his discomfort: one arm is around his father’s neck while the other rests on his own leg, staring into space, not knowing where to turn, what to do or say, certainly not complicit or interested in what his father is doing. The painting shows two black figures who, through the furnishings, seek colour, warmth, and everyday life, which is clearly absent from their poses. The fatter is near yet distant – he was probably more of a master, due to his job and the period he was living in.