The demolition of Tirana’s National Theatre

Two artists – Adrian Paci and Stefano Romano – tell us the background story and the emotional impact on people by the loss of a crucial and much-loved building in the Albanian cultural scene. 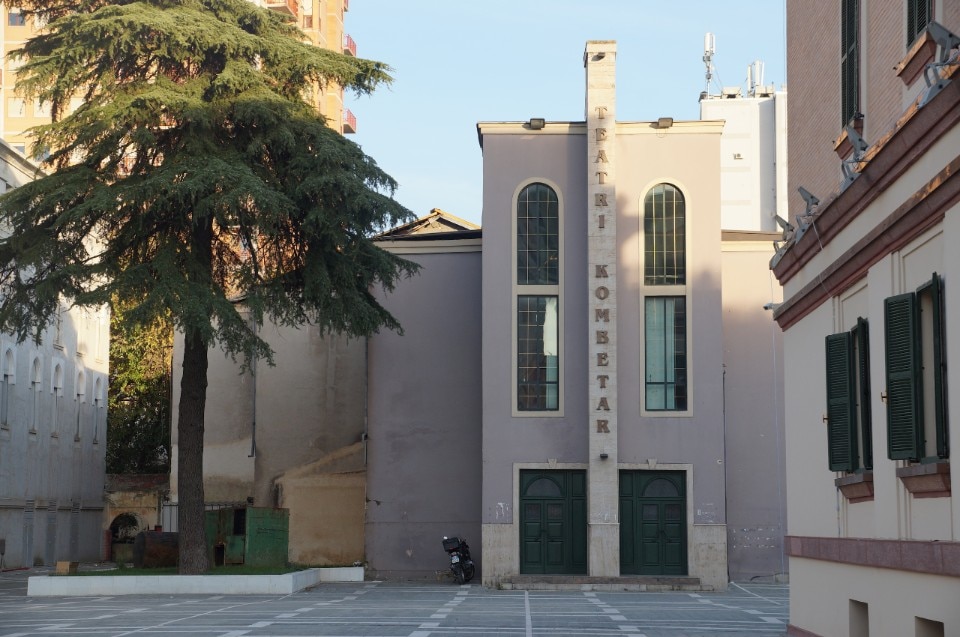 At dawn on Sunday 17 May, right in the centre of the capital of Albania, Tirana, the National Theatre building, constructed by the Italian engineer and architect Giulio Bertè in 1939, was torn down. The episode, which was unexpected both in terms of timing and method, came in the wake of attempts for negotiation by a large group of citizens who petitioned for the building to be saved, and has has a strong emotive impact. The critics of the demolition include two artists: Stefano Romano, an Italian who has been living and working in Tirana for seventeen years, drawing inspiration from situations in Albania, and Adrian Paci, one of the most influential figures on the Albanian art scene. Paci lives in Italy, but his affection for Albania has remained unchanged. In fact, since 2015, with the creation of Art House – a house that also serves as a point of aggregation, exchange and artistic training – his important and continuous commitment to the national cultural environment and its valorisation, affirmation and internationalisation has become explicit.
We spoke with them in order to have a better understanding of the situation.

With the lucid viewpoint of an outsider, Stefano Romano recounts of a place undergoing continuous transformation, with examples such as the centrally located Skanderbeg Square, which has been transformed three times since he began living in the city. With regards to the turmoil in the capital since 17 May, he says that “the demolishing of the National Theatre of Albania has had very strong emotional impact on the population, and the images of the bulldozers knocking down the building before dawn, starting with the facade, immediately provoked strong reactions. There have been an increasing number of demonstrations both on the street and in the form of online petitions and campaigns.”

The National Theatre of Albania was one of the seven European buildings most at risk of being demolished, and more recently it had been under the protection of European foundations such as Europa Nostra in the hope of avoiding demolition. “The battle to save it began almost two years ago – explained Romano – when, among other things, the group Alliance for the protection of the Theatre was set up,in an attempt to raise the matter to an international level. Despite all the official support received, there was no official U-turn from the government. On the contrary, in the interviews given, the Prime Minister Edi Rama and the mayor of Tirana Erion Veliaj always expressed their intention to knock the building down.”

The demolishing of the National Theatre of Albania has had very strong emotional impact on the population, and the images of the bulldozers knocking down the building before dawn, starting with the facade, immediately provoked strong reactions

One of Stefano Romano’s most recent works, the video Zanafilla, expressed the very poetic nature of this theatre, and now, on the occasion of this epilogue, it represents a moving tribute. “I have always been interested in the ties between the body and the buildings that define living spaces, spaces for movement. Zanafilla – an Albanian term that means “origin” – was born together with the protests against the plans to demolish the theatre. The building becomes a kind of “character”, and its old and mutilated body is presented in parallel with the body of a young woman who sings a lullaby for the theatre in Albanian. The words are the result of my request to intellectuals, philosophers and local artists to write “a rhyme for the theatre’s lullaby” with the Cadavre Exquis method. One of the particularities is the reversal here of the usual scenario of elders singing lullabies for youngsters. Unfortunately, the idea proved to be prophetical.

The demolition even took place without the announcement of the sentence of the Constitutional Court and right in the midst of the pandemic emergency. “The government and the municipality planned the demolition of the Theatre together with the construction of a new building, together with a series of skyscrapers that were to take the place of the original constructions along the pedestrian way that flanks it, therefore on both public and private land. The government originally planned to develop this area via a public-private partnership, and a well-known Albania construction company offered to develop the project, engaging the Danish firm BIG (Bjarke Ingels Group). When this formula failed, the next step was a decree-law to transfer ownership of the land to the Municipality of Tirana, with a clause for the construction of a theatre of “contemporary architecture” with public funds. All of this took place over the week leading up to the demolition. The method and timing suggests that there was a deadline to be respected, even though the Prime Minister himself and the mayor of Tirana have both stated that currently there are no funds for the construction of the new theatre, and that the project will in any case be in the hands of the BIG firm”.

It should also be noted that the demolition and the use of the police forces are not an expression of political change within the government. Stefano offers his social and political analysis of the situation: “Tirana is the centre of economic interest for the entire country of Albania, and construction is one of the most important possible investments, as well as the biggest source of income for Albanian municipal reserves. The total adhesion to a Western capitalist approach has turned Albania into a wilderness for construction conquests. I believe that the demolition of the Theatre is not a sign of a change in Rama’s politics, but rather the continuation of his vision, Rama has seen an extraordinary rise in popularity since the beginning of the 2000s, and his image as an artists has served as a vehicle for his promotion. He has changed the image of Tirana and of Albania in the eyes of the international community, and he has done so through art. His is a contradictory figure. The cultural community had great expectations of him, but his internal policies, carried forward with carefully constructed international support, have been of great disappointment.”

Adrian Paci’s relationship with this story is different. His rapport with Edi Rama has always been based on a level of closeness and friendship, and his attitude of a sensitive monitoring of everything taking place in Albania has always been expressed with the form of great respect that a disciple has for their maestro. But the breakaway represented by the destruction of the National Theatre has driven him to express profound criticism not only for this particular situation but for its way to view the urban fabric and public space, and the role that memory plays in the definition of a territory.

Tirana is the centre of economic interest for the entire country of Albania, and construction is one of the most important possible investments, as well as the biggest source of income for Albanian municipal reserves

It is within this wider-ranging framework that Paci intends to outline the situation. “Two matters come together through the situation of the National Theatre of Albania, which was destroyed at 4.30 a.m. in the pre-dawn darkness of 17 May 2020. The first concerns the relationship with memory and the traces that it leaves in the urban fabric. The entire urban nucleus that the Theatre is part of dates back to the period between the 1920s and 1940s, and still forms an integral part of the architectural identity of Tirana. This urban layout, characterised by such precision, was already violated in the communist period and has continuously undergone transformation in more recent times. The case of the Theatre is by no means isolated; it is simply the most shocking. After the 1990s, many buildings, period houses, villas, elegant examples of architecture, modest but dignified, have been destroyed. And not only individual homes, but entire areas have undergone violent changes, seeing streets with their two-storey houses and inner gardens transformed into blocks of reinforced concrete. This is a victory for developers and speculative construction”.

“The Theatre had been able to survive thanks to the public value that it represented, above all in terms of memory. Even though naturally its presence was unable to serve the requirements of a true National Theatre. Its demolition represents a strongly symbolic act that highlights the lack of respect for the values that Albanian society feels it has been deprived of for so many years. This is the reason for the legitimate reactions it has provoked”.

In addition to these considerations, there is a wide-ranging reflection on the themes of the State, the government and the community. “The second matter”, continues Paci, “concerns the relationship between power and aesthetics, in particular with an idea of beauty that takes form in a series of grandiose works that are destined to be forced onto the city at the will of figures of power. In this sense, the engaging of famous architects is a frequent ploy, much appreciated from a media point of view. Power thus takes the form of a painter faced with a blank canvas, who feels free to project their vision. However the land is not a blank canvas, but rather an interweaving of history, memory, need and desire. What is missing in this logic is some form of consideration for the social fabric of the country, its past, its contradictions, and its patrimony of memories and values. There is a lack of attention and of willingness to listen, a lack of sensitivity and care. What remains is politics as a combination of strong moves, destined to overwhelm in the name of the spectacle it offers. Architects become the executors in the grand plan of the powerful, their clients. The citizens become spectators passively watching the unfolding of events and obliged to live under the dictatorship of a form of “beauty” that is forced onto them from above. The grandeur of the works ever increasingly belittles the citizens, crushing them and making them feel inadequate. It is true that after years of a difficult and chaotic transition from dictatorship to democracy, we have a need for visible signs, but the destruction of memory is most certainly not the right way to go”.

“I am convinced that, instead of the beauty of grandiose works, what we need is the beauty of relationships, and a form of politics that pays attention to beauty is one that seeks to create harmony where there is inequality, to bring truth where there is the clamour of lies, and to seek to govern contradictions without suffocating the forms of tension that bring life to free space and democratic dissent. This task can never be carried out by one person alone, and cannot be done in a day, as it calls for efforts to cultivate, not to create isolated plantations. We all know that none of this is easy but doing otherwise risks creating an ugly society in the name of works of beauty”.

Representation, citizenship and democracy are therefore the important ongoing matters – not restricted to Albania – that the National Theatre of Albania has brought to light with its destruction.