Camille Blatrix: “I wish people feel like they're at Starbucks” 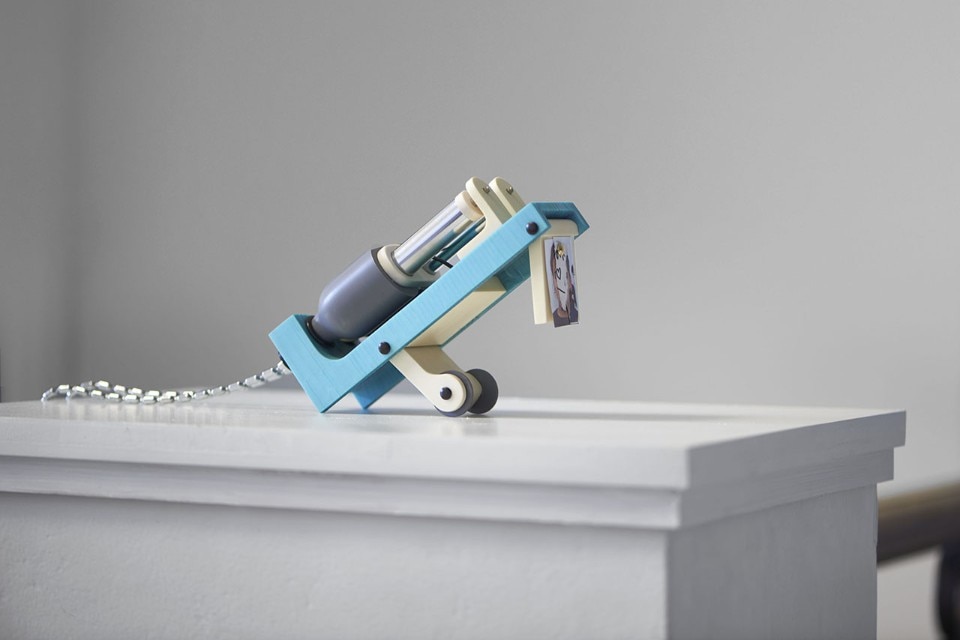 As disseminated rebuses and ghost snares, new series of works by French artist Camille Blatrix (1984, Paris) are publicly displaced and exhibited in Switzerland. The title of his first institutional monographic solo show at Kunsthalle Basel is Standby Mice Station, curated by Elena Filipovic. On the first floor, new sculptural interventions and marquetry works, inspired by the mass-produced objects that surround us daily, are made using traditional techniques and exquisite handcraft.

The works in the exhibition look like prescient in exactly this way, uncannily anticipating the objectification of language wherein the notion of personality as an assemblage of prefabricated images is practically the default. The combination of elements, their sparseness in the space and taut tension between them, attempts to convey the tragic emotional charge of a world in which being able to experience a new vision of a distant future.

Though his work is full of interesting hidden and imaginary turns, his particular brand of object-based conceptualism has often been conceptually thin and aesthetically enigmatic. For Standby Mice Station, with the full alliterative force of his deliberately nonsensical title, the artist has imagined just such an ensemble of new sculptures and images, the latter fashioned in that anachronistic technique of wood marquetry (mostly bygone in art, now more known in the realm of furniture making).

These images line the walls around the ready-made object that inspired the artist’s own miniaturized laboratory, Weather Stork Point a grown up’s oversized technological gadget, evoking a bizarre climate predictor meets board game meets robot vacuum cleaner. Partially covered in feathers, with balls emerging from it as if for somehow measuring atmospheric shifts, and bearing pictograms of the sun and moon, stars and snow, it can’t actually register anything.

When you first saw Camille Blatrix’s work, which aspect about his carefully handcrafted objects, that almost look mass-produced, did you admire the most?
Elena Filipovic: When I first saw Camille’s works, it was their utter strangeness that intrigued me. And the fact that they are so strange without being strange at all, if you know what I mean. Think of what a UFO looks like, it affects us, convinces us it is a UFO, precisely because there is something that is familiar but unplaceable, so much like a machine or vehicle we know but one ever so slightly set into the future or with buttons or hatches or pumps that serve unknowable purposes. This is the what it is like to be in front of one of Camille’s sculptures.

Camille Blatrix’s solo show could represent a 2020 poetic declaration? If yes, which kind of new cursus inaugurate at Kunsthalle Basel?
EF: It is interesting that you ask about poetry! Often in his conversations about the show, Camille referred to it as a poem rather than a story, it functions not to be “about” something or have a clear narrative with a plot and neat conclusion but rather like a poem that connects unconnectable things but somehow creates sense from them, and in the process pushes language forward and touches its reader.

How does this exhibition also represent a bond to the past, connecting solo shows which enhanced single figures as Wong Ping, Geumhyumg Jeong, Dora Budor, Kari Upson, Alex Baczynski-Jenkins and Joanna Piotrowska?
EF: Yes, and no. Of course, each show is somehow independent and thought on its own but I can’t help also think of the shows together programmatically, as a statement that is articulated across them. This year there was a kind of thread that connected many of the shows that focused on technologies and bodies, this was differently carried through in each of the shows you mentioned, including Camille’s carefully crafted and meticulously and emotively hand-made “machinic” devices for an unknown purpose.

Do you recognize a new series or artistic approach in the works he introduces for the show at Kunsthalle Basel? What kind of new practices did he have the chance to develop for Kunsthalle Basel? Is Camille Blatrix defining a new kind of objectification?
EF: I would say that in his insistence on the affect of things (he calls them, literally, "emotional objects”) Camille is making us pay attention to the ways in which the inanimate can speak, convey sentiment, transfer feeling, all those things you expect of animate things. It’s an extremely resonant question in this moment of our history when humans rely more and more on technologies (we give them names like Siri and Alexa, we covet our iPhones as if they were precious heirlooms, we entrust our data, our memories, and our finances to machines).

Camille powerfully does not decide for us how we are supposed to feel about that, in other words he is neither pro technology not a luddite against it either, since on the one hand he makes things that look like machine but on the other they are made by the hand and are full of love, so he creates a fundamentally ambitious series of responses to our present, which provokes thought and provokes us to question our own position on the topic.

How did Kunsthalle Basel’s spaces and architecture influence your works? And how did you approach the install and placement in regards to the spaces?
Camille Blatrix: To be honest, at first, I try not to think too much about the architecture, the space is already so beautiful and the scales are perfect. I really think trying to react to these galleries can be a mistake—you'll end up losing. Like the human figure in front of nature in a romantic painting. Nature will always be stronger. So, I just thought about what this space makes me think of, what feelings I get the first time I went through it and then things came naturally.

I was able to bring these feelings back to my studio and started working. Even if my studio is way smaller than Kunsthalle Basel, carrying the emotions with me to Paris was the best way to mentally transform it into the size of the exhibition spaces in Basel.

Could you please describe your idea of origins and starting point for exhibition?
CB: It all started this summer when I was putting my daughter to bed, during a heatwave in Paris. The walls of her bedroom are purple, and there are toys that make sounds and wind and have pulsating lights, everywhere on the floor. It seemed outside the world was falling apart, but I’m trying to be an optimist for my daughter. The whole of the show really came from this particular moment.

Could you please express or formulate an accompanying thought that you would like to give the audience for your new institutional solo show?
CB: I would like the people to feel like in a Starbucks cafe.

Did you develop new works recently and what do you have in mind for the future?
CB: I developed only new works for Kunsthalle Basel, which was a really emotional process and now I needed a small break with my wife and daughter before I got back to work. I will have a show soon at Andrew Kreps, my gallery in New York. And then soon after, the exhibition in Basel will have its second act at the Centre d'Art Contemporain - la synagogue de Delme in France. For the future, I dream of making pieces that people can actually touch, not necessarily using, but touching, to amplify this confusion between objects and sensuality.