In Paris, the artist introduces a monumental group of sculptures, manually and mechanically formed as geological portals. 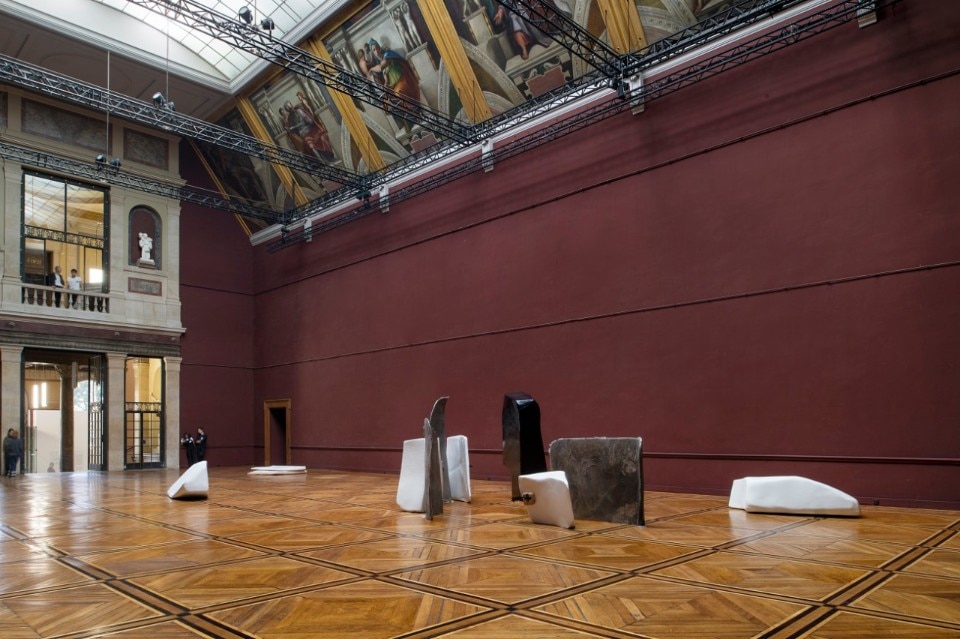 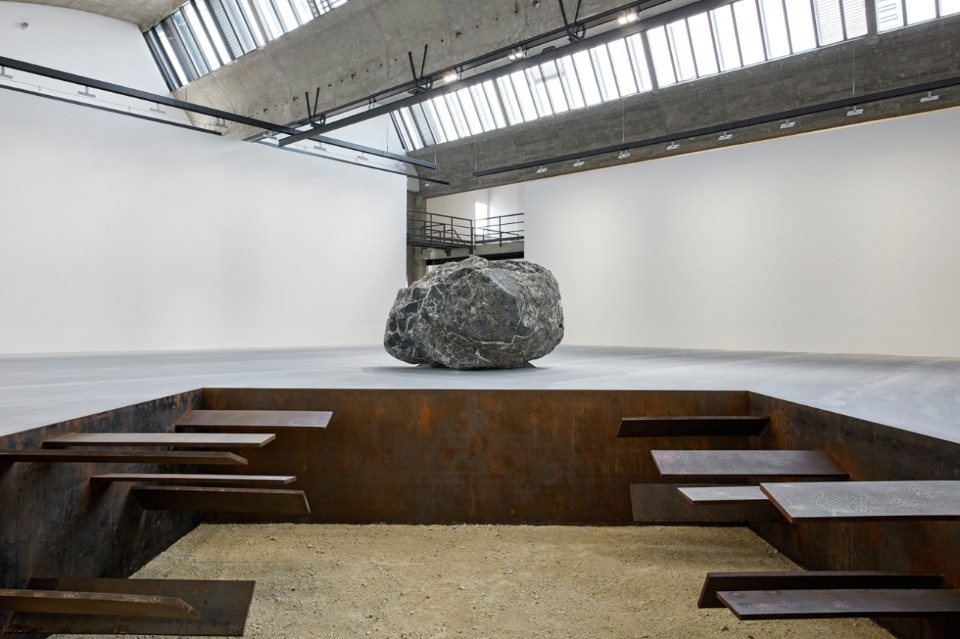 The stage is empty, as a prehistoric site, and it’s unclear whether we’re at the beginning or the end of some kind of epiphany. Anticipation and expectation animate the monolithic works, provoking a familiar disquiet. At a time, each component appears as made of very palpable and material potential for interconnections and connectivity. The intervention compels us to linger in primal questions about tension.

There is a productive elan between the introverted world of the protected inner space, and the public sphere with its representational claims. This dialogue set up by the Iranian-born, Berlin-based
artist directs our attention towards the ways that we interpret multi-layered dimensions, how we understand abstraction and absence in the realm of representation, and how we apprehend multi-crossing space within a halted sense of time. An aesthetical plan, especially determined thanks to the Maintainers installation environment: the today’s École des Beaux-Arts.

It is a vast complex spreading over an area of more than two hectares between the rue Bonaparte and the Quai Malaquais. Most of the buildings date from the 17th to the 19th centuries; some are from the 20th.The oldest buildings are the chapel and its annexes, erected in the early 17th century as part of the monastery. During the French Revolution and the Napoleonic era, the architect Alexandre Lenoir (1761-1839) converted the premises into the Musée des Monuments Français, a museum with several extraordinary works of French sculpture.

In 1883, in what was to be its last extension, the École acquired the Hôtel de Chimay and its outbuildings, dating from the 17th and 18th centuries, located at 15 and 17 Quai Malaquais. Here, presented in a disparate composition within the monumental and adorned hall, whole of the elements resonate with a visible correlation and an inherent potential: for a prosthetic universe, tending to re-join Nature.

The sculptural intervention’s title, which also names all the individual works, provides an apt description for the un-geometric compositions. Simplified rectangular and defective shapes materialize out as if they were made of repetitive washes of watered-down colours, while successive layers of masking and pouring yield saturation effects. The representational quality of Maintainers is surprisingly strong, despite a stylistic approach that leans towards the abstract.

The work prepares us to understand the criteria inherent in any geography, but also how little it can take to make elements purely formal appear as symbolical. The shapes of the abstract cuboids made of polishing wax defy modernist vocabularies. Their material nature implies a submissive utilitarian purpose, as they exist to preserve their aluminium counterparts which could gradually consume them over time. Working predominately in greyscale, Maintainers become phenomena in understated a-chrome: soberly examining the formal characteristics of events that usually leave us stunned.

For Baghramian, the spectacular is a pointed moment where the relationship between visibility and invisibility turns into liminal masses. In some instances, the previously-invisible materializes, as with the grainy, unfinished appearance; elsewhere, the fugitive quality of a darkness milestone shades into imperceptibility.

Their materiality bears witness to their submission to a utilitarian finality: the sole purpose of their existence is to protect an aluminium homologue volume, displaced on the inside of the monolithic centripetal shield. Here the daylight plays a double role: absorbing and rejecting surfaces.

Measured portions of empty space offers a shallowed space. The layers obscure sculptural perspective, making it unclear what recedes and what advances. The complicated Maintainers’ bodies as counterpoints to the uni-dimensional or normative body, find themselves pushed out of Palais des Beaux-Arts space, at a time when it is simultaneously being pushed out of public and political spaces around the globe.

Read Also: Laure Prouvost's You are My Petrol, My Drive, My Dream, My Exhaust

As a whole, from every direction, the exhibition confronts us with halted time, a sense that the relevant action has been concealed from view and we’re stuck sitting where nothing could eternally happen. Abstraction, de-materialization, and straight-out consistencies, as well as sculptures’ quietude and quality of suspension invite us to approach the scene of an antique stage, suggesting a spectacle reconsidered purely through its abundance of dimensions, built up by transparency and artifice.