The Florida project: the outskirts of the dream in the new film by Sean Baker

Almost as radical as its predecessor Tangerine, Sean Baker's new film tells of the American dream: opportunity, liberty and ambition for success represented by Disney World, resorts and malls. 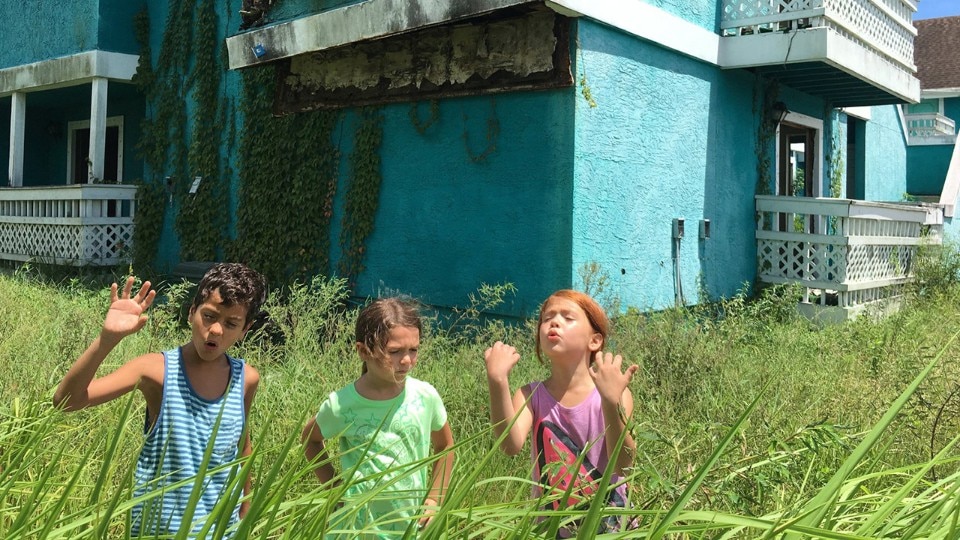 Recurrent elements in the landscape in the Eastern European suburbs, the enormous and very sad Soviet angular cement tenement blocks, touched up in a clumsy attempt to create a lurid rainbow patchwork, look like made-up corpses. A similar impression could be had by visitors to Disney World in Orlando, Florida, if they paid some attention to the urban layout of the areas surrounding the avenues leading up to the theme park. The sprawl of run-down purple and turquoise motels with dystopic names such as The magic castle or The futureland, abandoned pastel-coloured districts, and over-sized malls, non-places made even further so by their being satellites to centres which are, in turn, non-places in themselves, is the setting of The Florida Project by Sean Baker. While its predecessor Tangerine was striking for its formal extremism (it is the first feature filmed entirely with an iPhone to be distributed to cinemas) and content (all the main roles were played by transsexuals), as well as for the intelligence of the screenplay, bringing its writer to the attention of the critics, The Florida Player is no less radical, despite more closely resembling a traditional film.

Italian distributors are no strangers to taking liberties and have translated the original title into Un sogno chiamato Florida (A dream called Florida). While one may turn their nose up at such creative liberty, in reality, an examination of the two titles helps us to understand the reference points of the film. The dream is clearly American, ideology based on opportunity, liberty and ambition to succeed, and the larger-than-life spectacle embodied by Disney World and the display of abundance of resorts and malls. The project, also from an urban planning point of view, tells a story of marginalisation. The second-class motels are the permanent habitats of relics of the American Dream: there are veterans, ex-convicts, the insane, Cuban immigrants crammed into the dream-like cathedrals, and single mothers run adrift. The economy that supports the microcosmos is pure subsistence: they survive through prostitution, benefits and petty fraud with rich tourists as the victims (which should never happen: there is only one rule which is not to be broken, as it would destroy the dream, and that is “you can't fuck with tourists”) in an uncultured perpetual passive-aggressive situation. They spend their time in front of the TV, or watching events around them (a fire, passing helicopters, fireworks) as though on TV.

Given the situation, we could consider this a slice of life, animated by the best of philanthropic sentiments yet sanctimonious and affected. Instead, The Florida Project is anything but this, because its specific film style is based on Moonee, Scooty, Jancey and Dicky, who transform the existential stasis of the adults into hyperactivity. For the entire film, the children wander, run, explore and – through their eyes – transform the non-place into a magical world, and the run-down surroundings where they are growing up into a place of adventure where grazing cows can be tuned into a safari. The overturning of space, which should be claustrophobic, squalid and asphyxiating, into its magical opposite is aided by wide-angle and hand-held shots all taken at child-height. The estrangement is amplified by a combination of distortion and tailing, as well as by the dominant acid tones provided by the colours of the walls. Realism is constantly replaced by escapism – literally so in the finale, shot – it seems – without permission and from a hiding place inside Disney World itself.

Lastly, there is a fundamental character: the manager Bobby, magnificently portrayed by Willem Dafoe. Bobby represents the figure of the “guardian”, based on another great American outsider, William S. Burroughs.  It is the function of the Guardian, wrote Burroughs, to protect hybrids and mutants in the vulnerable stage of infancy. If everyone - adults, more than those who are of a more appropriate age - acts like children in the Magic Castle Motel, it is Bobby’s solitary and unacknowledged task to intervene, protect, lead and physically hold the motel and the lives of its tenants together. Bobby is the caretaker, the one who looks after everything, who chooses to dedicate his time to others in a clear contradiction to the pure Randian Darwinism which innervates the dream and dictates the actions of those who are dazzled by it. He is the film's (anti)-hero, one of the 36 “hidden righteous ones” who secretly hold up the moral structure of the world, according to the Talmund. In this sense, the continuous maintenance of the run-down structure is a clear objective correlation. What is an objective correlation and, in a certain sense, also an act of retribution, is the extraordinary epiphanic moment in which three wonderful cranes swoop along the avenue and he, as the caretaker, leads them away to save them from being hit by a car. It strangely recalls a scene from a film far removed in terms of location and style, Aleksandr Sokurov’s The sun. In that case it was the emperor Hirohito, held hostage in his palace by course Yankee soldiers, whose grace and fragility was reflected in a crane encountered on a street.

Read also: Filmed among the Modernist buildings of Columbus, this movie directd by Kogonada integrates architecture with the narration

American cinema in the last decade has been regenerated by new independent cinema by writers such as Jeff Nichols, Debra Granik, Derek Cianfrance and Taylor Sheridan, who have taken their cameras far from the coasts to the central states, snubbed by Hollywood and by the New York avant-garde, to tell marginal stories, until now considered uninteresting, with a dry, classic, documentary-like and almost Springsteen-esque style. Sean Baker continues his exploration and mapping of an America excluded from the dream, updating the aesthetics to the millennial era. A writer is born.