More than installations, the many works arranged in the dark nave of the HangarBicocca are complex relational machines, chasing each other on before coming together in a bouquet worthy of a queen. 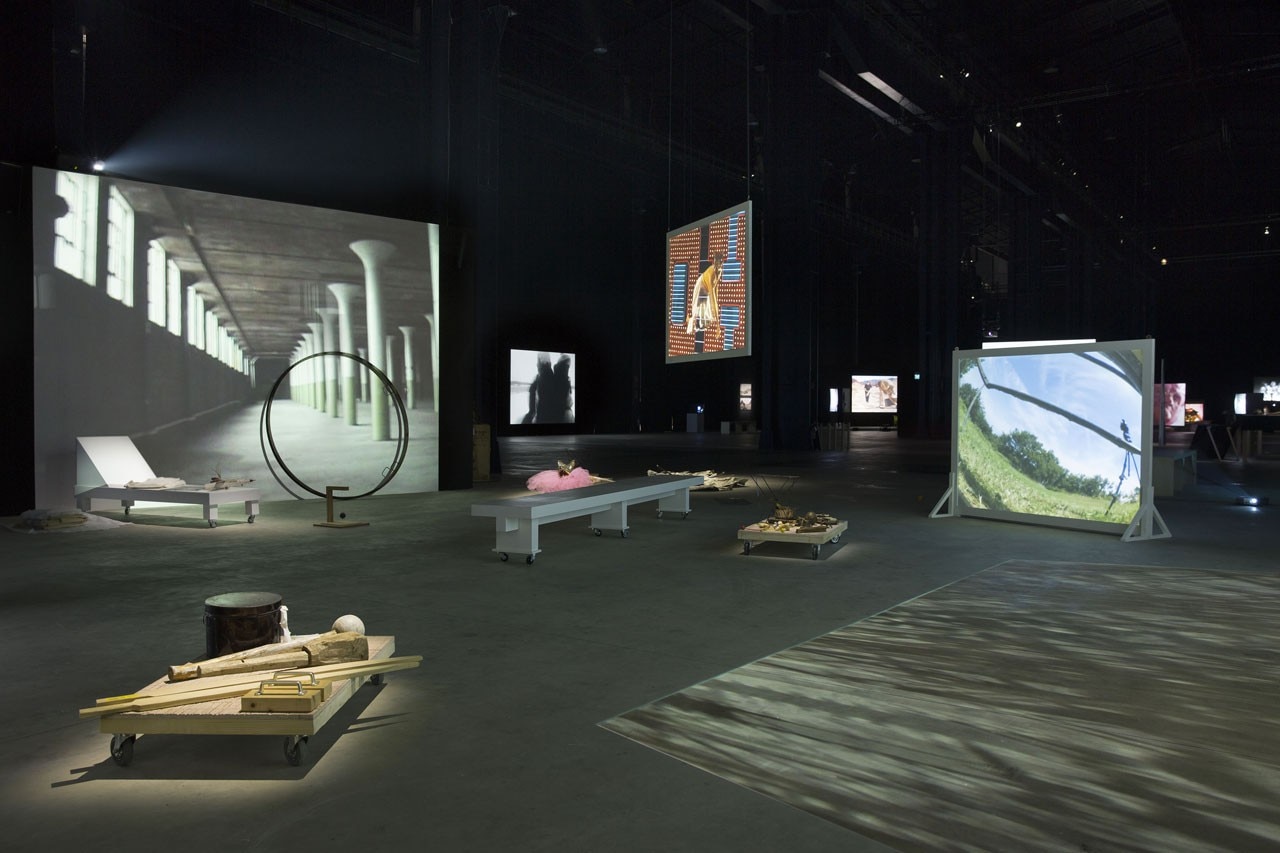 A seagull circles effortlessly over an expanse of shells, corals and snow-white confetti on a deserted beach.
The sky is steeped in a salty solution of liquid noon and, if you push your imagination, you can strain your ear and hear the sirens of departing ships carried by the wind. This lively scrap of a marine landscape floats in the centre of the Joan Jonas exhibition like a fragment of a dream, forever frozen inside a glass boule à neige as big as a baseball. An affected summer scene in reverse to be carried in the palm of the hand which, in a miniature prism, conveys the light, dreamy and, at times, surreal mood of this exhibition.

Rose-coloured shells swept up by the tides of the moon and heavy snow, too heavy to float. It was, after all, with this unlikely combination of images that, in 1968, Jonas wove with remarkable poetic intuition the plot of Wind, the oldest work in the exhibition and one of her first much-applauded films. She filmed it with Peter Campus on a deserted Long Island beach pounded by December snows, with a sky looking almost like another sea and the performers, like little robins in the storm, fighting a furious battering wind that sang and tested the nerves. In the distance, immersed in a blinding fog of salt air, Joan Jonas and Keith Hollingworth appear and disappear like albino antelopes, bundled up in heavy woollen overcoats glittering with mirrors reflecting the quivering broken images of a landscape constructed out of fragments, as is the memory.

Wind is a work that moves on several layers of the aesthetic thought of the New York artist, born in 1936 and the next United States representative at the Venice Biennale (interested in nature and its forces, and with an aptitude for choreography and weaving relationships between different subjects and disciplines; the motif of the wind, a distorted landscape in limbo and the mirror as a stage prop that breaks up and multiplies space – an idea borrowed from Borges and transposed, in 1969, into the famous Mirror Pieces series). It is hardly surprising that this submerged memory should resurface more than 40 years later in the latest video, created by Jonas for the occasion: Beautiful Dog (2014) or “A dog’s summer in Canada”.

The work is a new saison pour la plage for the artist, in which the beach is that of Cape Breton (the location of the 1971 performance Nova Scotia Beach Dance, with spectators perched on a cliff, experimenting the time dissonance created by the distance between a sound generated by an action and its acoustic reception). In it,  the sea and sky, riding the back of an unrepressed dog called Ozu, merge one into the other.

Also merging one into the other and acting in concert are the many works in this exhibition, masterfully arranged by Andrea Lissoni in the dark nave of the HangarBicocca. Twenty works in all, produced between the late 1960s and the present day. More than installations, they are complex relational machines – decentralised and out of control. Like the many trains of a long-tailed kite chasing each other and egging each other on before coming together in a bouquet worthy of a queen.

Joan Jonas trots from one work to the next in her different ages like a circus rider, before suddenly vanishing like Alice though the looking glass.

Here she snakes and climbs over a wall with a large mirror anchored to the ceiling (like a fourth wall of the theatre), swaying lightly to and fro, making you giddy, in the Choreomania performance of 1971 with Richard Serra, the narrative mechanism entrusted to body movements alone. Here she is, in the middle of spouting volcanic eruptions, running on the spot and quietly whispering incomprehensible words into the mouth of a metal cone, and wishing goodnight and good morning via the many monitors of Mirage (1976/1994/2005): a work initially conceived for the screening room of the Anthology Film Archives in New York where sculpture, videos and performances come together in a long and prolonged orgasm.

Here she is again, in orbit in the closed-circuit system of the video I Want to Live in the Country (and Other Romances) (1976), reading excerpts from her diary and arranging a De Chirico-like set with a bronze horse, a globe and a Mexican mask. Here she is many years later in the company of the dog Zina, an impromptu painter in My New Theater III: in the Shadow a Shadow (1999), a portable miniature theatre, and performing a number of ritual actions to melancholic music in the video Waltz (2003), a work inspired by Goya’s grim Los Desastres de la Guerra engravings but decidedly humoristic through and through – a flag flutters, a chair levitates and the faces are transformed into amusing papier maché masks.

Joan Jonas possesses that rare ability to deal with ten different ideas at once, like a juggler with balls. As prolific as an aged but remarkably exuberant wisteria, in nearly two and a half decades she has never stopped weaving dreams and mirages in the concrete fabric of reality, pursuing a vision, a mood or a refrain, or allowing herself to be seduced, especially from the mid-1980s, by the narrative mechanisms of stories – whether epic, mythological or fable (1976 saw her first text-based performance, The Almond Tree by the Brothers Grimm). Layered like a mille-feuille cake of time-planes and compressed narrative levels, Joan Jonas’ narrative season, forming the third act of this inexhaustible exhibition (entitled “Light Time Tales”), features ten multimedia installations scattered along the exhibition route.

Works inspired by epic poems (e.g. Volcano Saga, 1985/1994, an unpolluted world of glaciers and fjords, volcanoes and soothsayers, bleeding rings and gilded helmets), literary texts (e.g. Reanimation, 2010/2012/2013, in which prehistoric fish, magic rams, demons and ghosts help construct a supernatural universe) and critical essays (e.g. The Shape, the Scent, the Feel of Things, 2004/2007, all collected in Aby Warburg’s “farewell lecture”, later known as The Serpent Ritual, in the psychiatric clinic to which he had been admitted following a nervous breakdown).

The barycentre of this promenade too long for the occasional visitor is Lines in the Sand (2002), a sprawling and kaleidoscopic installation that represents a shift, a point of no return (from the expression “to draw a line in the sand”). The narrating voice explains that we all know the story of Helen of Troy but only some followed her to Egypt. It then asks how she got there. The work  is a detailed remix of a legend dating from the dawn of time (featuring a king, a queen and a milk-white bull) with recitals by the imagist poetess Hilda Doolittle, Tribute to Freud (1956) and Helen in Egypt (1961), stating that Helen never reached Troy and that the Greeks and Trojans actually fought over a surrogate, a phantom, an illusion.

The result is a highly absorbing decoction of  myth, visions and presences that obscures the so-called real, tangible world and only leaves illuminated the unconscious, pseudo-imaginary one. A strongly coloured hallucination in which a lime-green chaise longue (revisiting the psychoanalyst’s couch) invites us to a journey through the forgotten, the unobserved and the paranormal. Was Helen a star, a ship or a temple? Was the war inevitable? Who won? Who lost?” Sphinxes and spirals. Purple, blue, black, checked and striped garments. Flocks of sheep and rams. A pomegranate ruined by the winter; a pomegranate in flower. The sound of chalk on a blackboard. “I have seen the world through my dual lens, it looked as if all was broken, everything except that.” The Pyramid of Cheops. The glass pyramid of the Luxor Hotel. Everything goes round, stops, and starts going around again. A blink of the eye and the sphinx is upside down and glittering snowflakes seem to come to rest on the golden-sand fabric of Lines in the Sand.