In conversation with Domus, the anarchitect talks about the golden years of radical architecture in Italy and all over the world, and why he got along better with artists than architects. 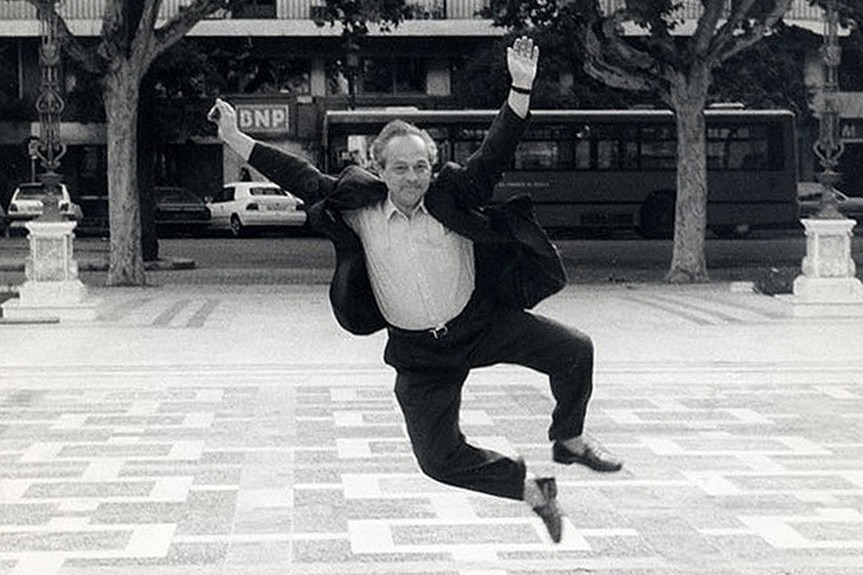 With his unfailing ironic smile, Gianni Pettena likes to explain that while his fellow architects have generally only built a part, often a small part, of the projects they designed, he, over the course of his career, has built “absolutely everything… or almost”. “And on a 1:1 scale,” he adds, with a dig at his Radical architect friends, who often replaced the reality of construction with the simulacrum of the model or photomontage.

The anarchitect Pettena loves paradoxes, because while it is true that he was able to build almost all of his projects, it should be noted that these projects are not buildings or pieces of architecture in the traditional sense but installations, spaces, performances. And yet, even if they take on the forms of art – not following but often anticipating the modes of Land Art or performance art, or participatory practices –, such projects are, for Pettena, still architecture. Indeed, they are the only possible architecture: intended not as the practice of a normative rationality and of man’s dominion over nature, but on the contrary as a practice of adaptation to the environment, as a gesture that, instead of claiming the autonomy and authority of the designer, and, more generally, of the human being, reaffirms the ties of interdependence that bind him/her to the world.

It seemed natural to me to take an interest in cinema and experimental theatre, to explore contemporary practices that were rethinking visual languages but also the spatial coordinates.

“Absolutely everything… or almost” is the title chosen by Pettena for the monograph recently published by Quodlibet. The volume, more than 500 pages long, documents, for the first time, all of the architect's projects and a large part of his theoretical texts from the 1960s to the present day. From the overview the book provides us with, Pettena’s path appears in all its coherence and complexity. Born in Bolzano but an adopted Florentine, he was not only an undisputed protagonist of the Radical movement but also one of its most authoritative exegetes.

However, he never ceases to assert his autonomy and scepticism. A student together with the members of Superstudio and Archizoom at the Faculty of Architecture in Florence in the 1960s, where he matured his break away from the Modernist style, he quickly realised, as he likes to say, “that it was only a vocational school for obtaining an architect’s licence, for the professional who is trained to make buildings stand up, to organise spaces rationally, but who doesn’t give a damn about the language, the materials, the inhabitants. A school of absolute obedience, which teaches not freedom but the restrictions that a certain idea of society imposes on architecture”.

Therefore, he prefers to visit art galleries – not only in Florence but in Milan or Turin, at Gian Enzo Sperone’s, or in Rome, at Sandro Gentili’s -, or to follow the readings of the poets of the Beat Generation invited by Fernanda Pivano around Italy. He explains: “it seemed natural to me to take an interest in cinema and experimental theatre, to explore contemporary practices that were rethinking visual languages but also the spatial coordinates. Between the 1960s and 1970s, the artists of Arte Povera and the young artists of Land Art, such as Robert Smithson - whom I met in Rome in 1969 and with whom I published a conversation in Domus in 1972 - were developing new ways of thinking about space, of connecting man with his surrounding environment, both urban and natural. Above all, the artists I related to, with whom I made friends, were those who used visual language in tune with the evolving culture of my generation and who were experimenting with new ways of making art, such as performances and installations. I, who had a form of hypersensitivity towards architecture, a specific focus on questions of space and environment, found myself perfectly integrated with them. We asked ourselves the same questions and explored neighbouring fields.”

While I got along well with artists, on the contrary, I was almost always at odds with other architects...

In the 1970s, unlike many of his Radical colleagues, he did not succumb to the lure of design and, instead of moving to Milan to work with industry, he left for the United States, where he explored the deserts and came into contact with the experimental art scene, encountering, among others, Lawrence Alloway and Robert Smithson. At a time when the MoMa in New York, with the exhibition “Italy: the New Domestic Landscape” (1972), confirmed the international triumph of Italian architecture and design, with a pungent and provocative spirit, Pettena exhibited, also in New York, at the John Weber Gallery, photographs of American deserts taken during his travels. The same spirit of contradiction drove him, the following year, in 1973, at the moment of the souvenir photo for the founding of Global Tools, an alternative school project bringing together the different radical souls, to pull out a sign saying I am the spy.

He still claims this distancing today: “While I got along well with artists, on the contrary, I was almost always at odds with other architects... and this also explains my great friendship with Ettore Sottsass. Because he had revolutionised not only the forms but also the way of thinking of architecture, reintroducing matter, colour, action and decoration into the flatness of Modernism, which only articulated functions from the perspective of the evolution of technology and the Industrial Revolution”.

For Pettena, Modernism had minimized architecture, reducing it to bread and water. “Whereas the menu of architecture has always been very rich”, he continues: “for architecture, reality is not the rational, it is the daily struggle between the rational and the emotional – a dialectic that underpins the evolution of culture in general. And it is this aspect that I was looking for at the time – and still am today”. In this, however, he found no companions among the Radicals, “because their radicalism was often a façade”, he says. And above all because they preferred to develop, he goes on, theoretical proposals or photomontages, taking refuge in the studio, giving up construction (or building, later, commercial architecture), renouncing the world. Being radical means going to the roots, finding architecture in the world, in nature... even in the desert!”

Driven at the same time by an exuberant and vital enthusiasm and unwavering intransigence, Pettena instead felt close to the American Conceptual artists with whom he had been in contact since the 1970s. But above all, he was among the first to introduce an ecological perspective into his research, which took the form of direct engagement in the natural horizon, uncommon in the thinking of Italian Radicals. As he recalls: “My whole journey has been strongly influenced by the presence of nature, of the Dolomites, the scenery of my childhood. Even when it does not seem visible, this influence is present at an unconscious level. As with the sofa Rumble, one of my first projects and one of my rare design projects (now produced by Poltronova): I thought of it as a sort of nest, where you remove the cushions and go inside with your friends. At the time – it was 1967 – I had designed a dozen lamps all around it that were stylized trees, but I only realized this thirty year later! I had made an allegory of nature in my first piece of architecture!”

For architecture, reality is not the rational, it is the daily struggle between the rational and the emotional – a dialectic that underpins the evolution of culture in general.

Rather than driving towards a moralistic pauperism or indulging in rhetorical demonstrations, Pettena’s works have the simplicity of elementary gestures that do not deny culture in order to rediscover the cult of an uncontaminated nature, nor do they idealize culture in cold rhetorical exercises. Not gestures that tend to leave a trace, to carve a mark on the surface of the world, to give meaning to man and the world, but on the contrary gestures that are embedded in the environment, that design their own disappearance, that take on the fragility of bodies, events and language.

In this sense, his work is being rediscovered today as that of a pioneer not only in the world of architecture but also in contemporary art. More and more, museums and galleries (such as Salle Principale in Paris, which showcases his work) are presenting Pettena’s anti-projects: as he writes, “ephemeral, reversible projects, whose value is sometimes only documentary: a conceptual architecture that often translates into physical experience, creating or renewing the need for a relationship with the environment” (p. 27). In these projects, a deep ecological awareness provides the foundations for a method that welds together sensitivity to form, attention to the environmental context and razor sharp conceptual demands. Without ever losing irony.