Carlo Mollino and the architecture of the highest mountains

Perhaps better than when it was accessible, the ghost of the Fürggen cableway today tells the story of its blurred creation by Carlo Mollino, who spent years on the Grand Murailles and on the Matterhorn designing an ideal city. From Domus 889. 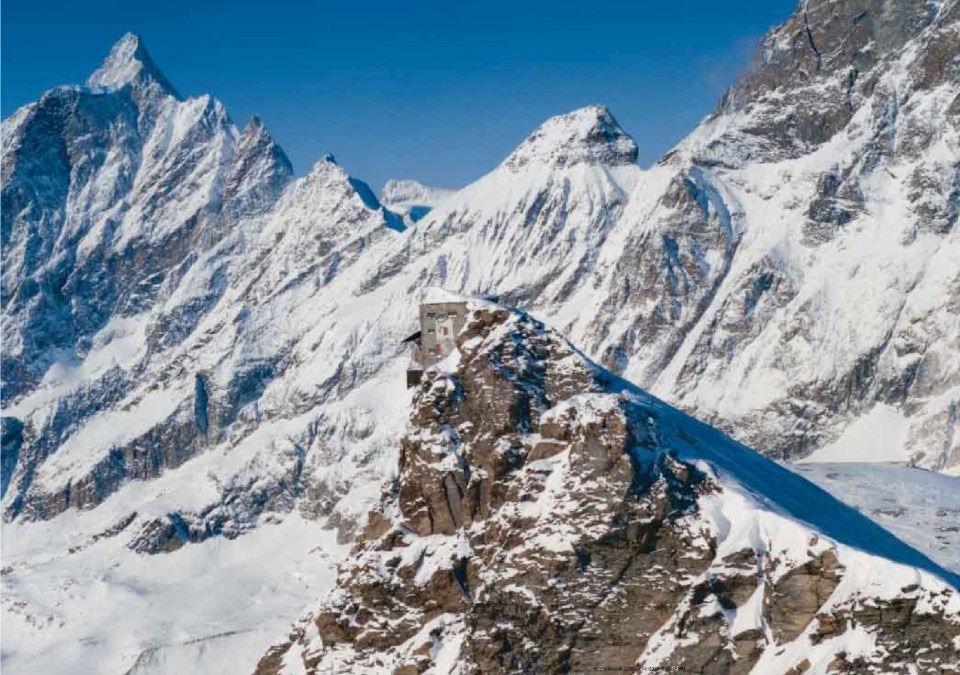 From the ’30s onwards, Mollino worked on a number of architectural designs and visionary ideas for Cervinia. Starting from the PRG project of 1939, through to the inauguration of the Casa del Sole in 1954, with many unrealised or partially realised projects in between. Mollino also designed the Hotel in the Cervino area in 1937, the Casa deli Sport shop in 1941, and drew up several plans for an alpine chapel at Plateau Rosà (1940-41) and Villa Lora Totino in 1946. He also designed several tourist complexes around Cervinia’s Cableway station such as the “Quota 2600” vertical sports centre, a variation on previous themes, as well as the extension of the Museroche cablecar station itself, in 1950.

It was never going to be easy. Count Lora Totino had decided to make use of the Breuil basin as the theatre for his idea of developing winter sports. The Count was also an engineer. In 1936, with other entrepreneurs, he planted the seeds of a ski resort in Cervinia, by constructing the cableway that would take skiers up to Plateau Rosà at 3,500 metres, then the highest in the world.

Cervinia as a resort did not begin with the construction of Mollino’s Casa del Sole, but with Cereghini’s Hotel Cervinia, completed in 1936. The Count even wanted to link this future micrometropolis directly with the Matterhorn, Il Cervino. Having in mind a top station to be built on a ridge just below the mountain peak, he invented the Fürggen cableway, which would cover the first leg up to the Matterhorn.

In the early summer of 1950, Lora Totino’s dream started with a project by Vittorio Zignoli: a single span of nearly 3,000 metres and a height rise of 900, with no intermediate pylons. The most ambitious part, designing the upper station on the mountain crest, was left to Mollino. Italo Barmasse, one of the cableway builders and then an aspiring guide, recalls: “I was 22 when hired for the construction of the cableway. There were about a dozen of us, and the first thing we had to do was lay the electricity cables. There were no helicopters or jeeps. We set out early in the morning with a packed lunch, did a twelve-hour day and carried the materials on our backs.”

I believe this construction represents an answer to the question of architecture at very high mountain altitudes, and that it is also a new constructional concept.

Count Lora Totino appointed Carlo Mollino to design the Fürggen ski-station while Mollino was still busy building the Casa del Sole, the condominium that was to condense the “Quota 2600” vertical sports centre. This was to be the first real experiment with an Alpine village, and it drew on the Tibetan monasteries of Lhasa as self-sufficient and self-justifying mountain units. The sports centre was the filter where citizens entered and came out as skiers, whereas the cableway was only for skiers – for good ones like Mollino himself.

The building would be constructed on the Fürggen crest, a strategic area to the future ascent of the Matterhorn. The crest was a hard and dangerous site, sheer on three sides and joined to the foot of the Matterhorn by an amphitheatre of rock. The project envisaged an alpine nest, capable of accommodating – only for a few seconds – the cable car cabin and those few, daring ski-fiends who felt (although maybe weren’t) able to face the hazards of the crest. The building dropped forwards, stretching beyond the rocky precipice to receive the incoming cabin, ready to send it straight back into empty space and to the uncertainty of the cables expected to support it, with no intermediate pylons or other human aids to mitigate its perils.

Lora Totino had given Mollino a tough job. Between May and September 1951, while the workers toiled on the moraine to lay the foundations for the building proper, Mollino was preparing his design of the station. In the first issue of Prospettive in December, he commented: “I believe this construction represents an answer to the question of architecture at very high mountain altitudes, and that it is also a new constructional concept. It is literally anchored in the rock, which had to be dynamited in order to create the albeit partial support platforms. All the rest is cantilevered.”

With the customary calm of his alpine projects, Mollino proposed a concrete box for the three floors of his design, with an aluminium roof to be lowered from above. There would also be a secret passageway into the glacier: the famous rock tunnel. This was built in 1956 and was used by skiers until 1993 as part of that terrifying experience of skiing down the Fürggen run. It was an awesome building, a design that conquered fear – the fear that influenced the whole of Mollino’s life but did not really come into his decisions. It was a fear overcome in his quest for sense.

Mollino tried and kept on striving to give everything a meaning. Skiing in the mountains, driving cars or flying over the Alps were like designing the Fürggen, establishing the hinge anchor point, perhaps surveying the land on foot, or on skis along the perilous crest. The station was completed on the basis of the engineer-Count’s idea and Mollino’s design, which was modified to meet the human difficulties arising from the site’s harshness and height. It finished with the cube, still visible today. There was no waiting room, accommodation or restaurant, only a bar, for which Mollino designed the furniture. There was no panoramic revolving structure, envisaged in one of the earlier perspectives but dropped from the final design. The Fürggen belvedere, however, was actually built. Gina Lollobrigida graced its terrace with her presence, and an altar, donated to by the TV personality Rascel, was frequently struck by lightning on the station.

At the Fürggen, Leo Gasperl, the straight downhill champion of Saint Moritz in the 1930s and maestro of the ski maestros, smiles proudly at the photographer, displaying a bottle of liqueur to be advertised. He came down the crest wearing his Thiring Mantel, the braking bat’s cloak invented by a Viennese physicist, which made it possible to ski in a straight line. This was the cloak “that avoids excessive muscular strain. It fell into disuse because its wearers feel ridiculous. If you don’t ski straight and fast, the wings go limp. The majority prefer to curve.” Gasperl named his Alsatian, Fürggen. And it was here that his wife Luciana set her fashion shows.

All this continued until 1993, when the cables finally lay drooping on the ground under the weight of ice, never to be lifted again. The dream, however, was not interrupted and the ghost of the station is still there, distant but present. Mollino’s ski station could be dismantled precisely because it is no longer used and therefore no longer useful, but it can still reveal a few surprises and a tremendous amount of professional expertise. Mollino is probably still around.

It is half past four on a crystal-clear winter’s afternoon on the Italo-Swiss border, approximately 3,200 metres above sea level. The truth is that the ski resort perched high up among these peaks shows what it meant to leave signs in 20th-century time and space.

The first expression that counts is Mollino’s own: a high-mountain architectural solution, or rather the creation of an amazing eliobeton hat after blowing up the neck of the peak. If the peak were a bottle, it would be a broken bottle ready for use as a weapon.

The second expression concerns the purpose of that weapon, i.e. “to control nature”. This splendid definition was coined by John McPhee to describe, among other things, the construction of dams in New Orleans. Fürggen is not a natural disaster but today stands as the effigy of many failures that followed many dreams.

The third expression conveys the singularity of those dreams. The 20th century was like a cone, at the end of which there are no shapeless masses but the silhouette of an absolute Individual, in the sense of free – millions of individuals who, in the West at least, experimented with their freedom, technique, nature, time and biological development with the same obsessive drive that constructs the psyche of a dictator or pop-star. The David Bowie of Station to Station springs to mind. On stage in 1976, he embodied the dandy and overexposed silhouette of the “thin white duke”, illuminated from behind by a Nazi-like coldness and the eyes of a declining West.

If Mollino had actually been a writer, he would have been Tommaso Landolfi, and if Tommaso Landolfi had been less isolationist, he would have rushed to applaud the erection of Fürggen. This is where he would have set his story entitled The Death of the King of France, in which the customary aristocratic protagonist tries to win a psychotic duel with a spider in a large ancestral country home.

Those, however, were huge spaces, especially in the mind. Those were huge individuals, especially in terms of their self-regenerative potential: precious stones grown without interruption on ever-renewable trees. It was a matter of not questioning the resources, i.e. fabricating a comic-strip future – but a time still to come nonetheless.

I define the set of conditions that contained the resources, the control and the still to come as the cross of the 20th century. Undertakings such as Fürggen lay the 20th-century’s cross bare. The 1950s constituted the first moment of the cross. In 1956, Mollino’s project conjured up a tunnel through the rock of one of Europe’s geological attics. The last moment was the 1970s: 1973 brought the oil crisis that prompted the turning point in the history of the past 30 years and in that of the coming 30. Mollino died that same year.

If architecture is an “economic diagram on the territory”, then the way Fürggen traces a radius despite all the other diameters is a time diagram singing in a crystal-clear voice this will never happen again here. Gianluigi Ricuperati is a writer and critic. He works in Milan and Turin.