Lightness and transparency, simplicity and union with nature are the key-words to interpreting Junya Ishigami’s work on view at the Fondation Cartier in Paris. 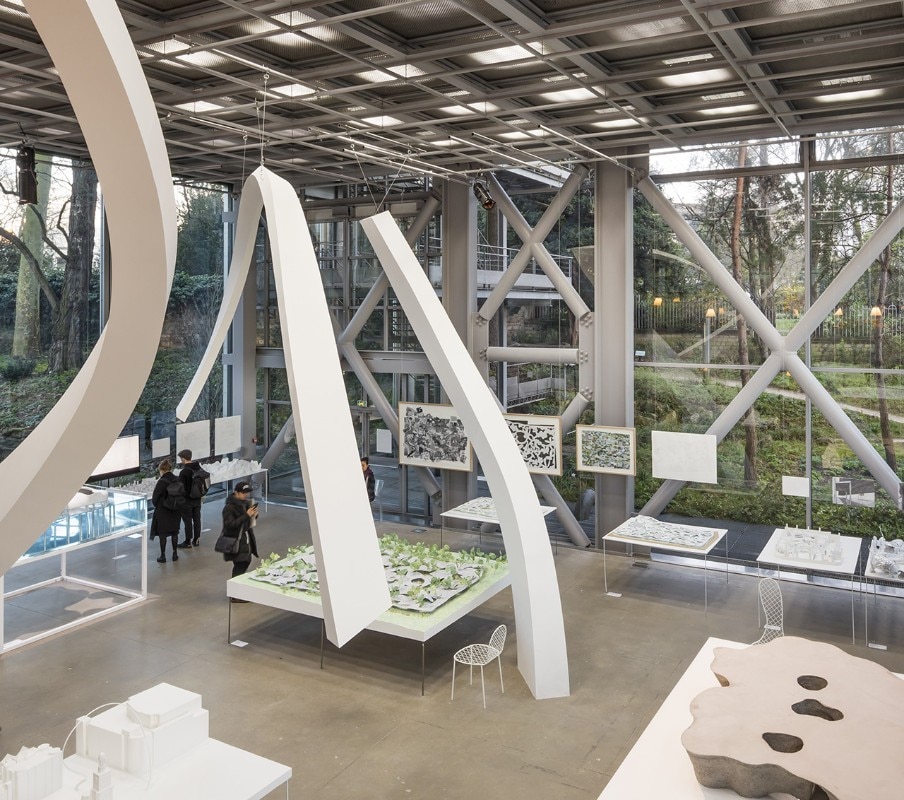 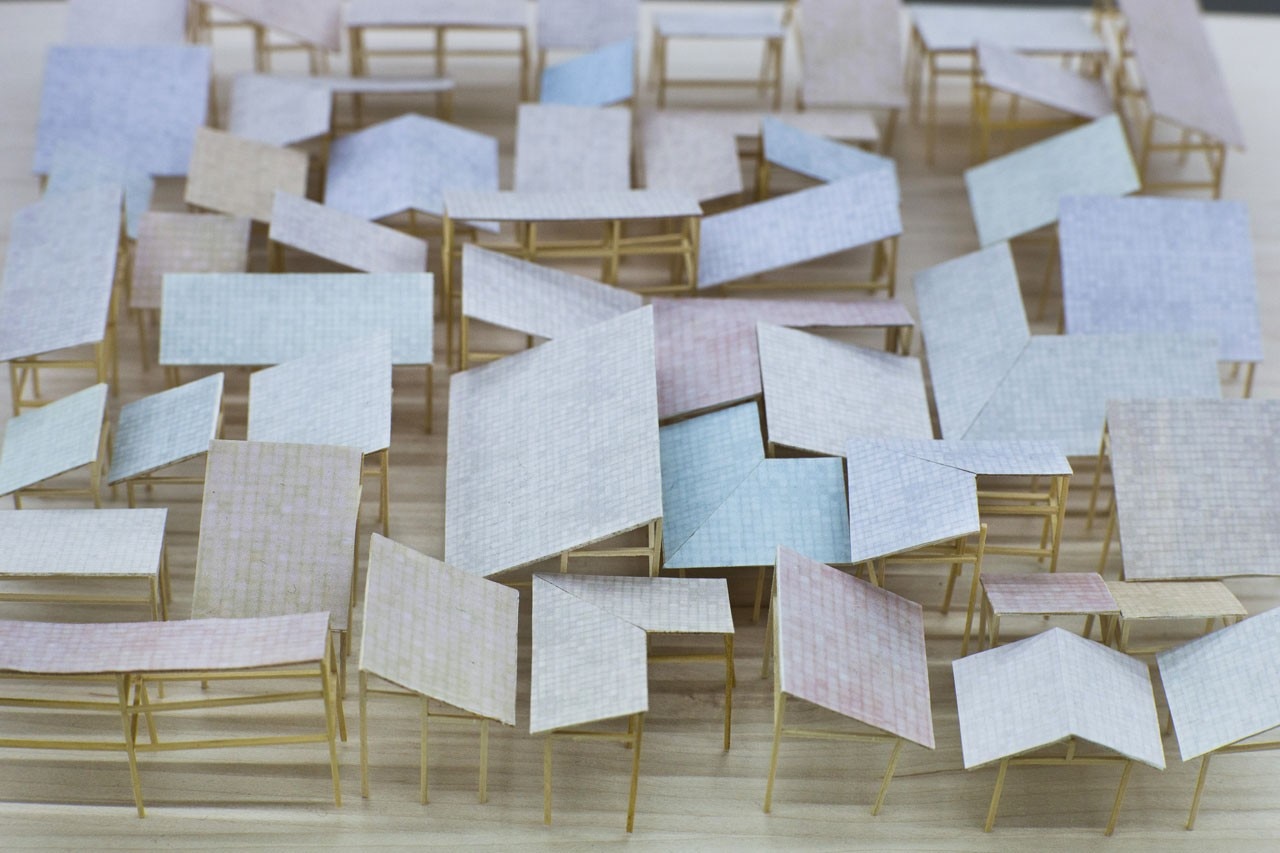 The exhibition title is succinct and programmatic – “Freeing Architecture” – just like the question we ask Isabelle Gaudefroy, curator of the solo show dedicated to the Japanese architect: What must architecture be freed from? “Freeing Architecture is the manifesto of an architect who makes dreams come true: his and those of a society that never stopped believing that functionalism isn’t the only answer. Ishigami presents a true body of works that aim to enhance the desire to free architecture from the constrictions of weight, matter, form: these are his concerns”. In addition to 20 large models and videos of his most ambitious projects, the show at the Fondation Cartier is enriched by a catalogue that clearly traces the genesis of his practice including his minute and detailed landscape drawings that unleash the poetry of his works. Unconcerned with scale, Ishigami puts no limits to his designs, interpreting them with subtle, never banal creativity that is always imbued with novelties or unexpected effects. The Japanese architect has a strong passion for nature and has a liking for the world of dreams as a primary source of inspiration.

Freeing the structure
The selection of works on display denotes freedom: what Ishigami declares as “Freeing Architecture” is, in reality, an obsession for design with spatiality at times brilliant but excessive, almost oneiric. In this sense, the exhibition should be read as an invitation to explore, without preconceived notions, the proposals of a visionary architect who isn’t afraid of exaggerating and pushing the boundaries. Even though for this exhibition Ishigami chose projects that have been built or are under construction, each one is a reflection that challenges all the structural details, including building technology and installation. It’s no coincidence that the structures of many of his projects are entrusted to Jun Sato, perhaps the most brilliant structural engineer in all of Japan. In his investigations, a key concept is the strong desire to offer new structural solutions that do not use the generic beam-pillar system. In particular, the design for eight villas in Dali, China, includes giant masses that play a two-fold role: as a structural system and a partition element. The megalithic stones present in the region are used to support a roof in reinforced concrete that is 300 metres long. The masses – used thusly – create a sinuous interior landscape, separated by wide glass partitions and interspersed with skylights that allow sunlight to enter inside. The fluidity of the spaces for the House and Restaurant project in Tokyo calls to mind some experiments by Oscar Niemeyer on the “negative space” and the creation of Ryue Nishizawa for the Teshima Art Museum. The building technique consists in using the land as a natural formwork: more specifically, deep holes, braced with iron and filled with cement. Once the cement dries, the dirt is removed, thus freeing the structure. The result is an organic building that optimises the construction technique in favour of a natural aesthetic. The design for the Groot Vijversburg Park in Holland has no pillars but a structural glass that allows interaction between the outside and the inside without any visual obstruction. The curved, 100 m-long roof for the multipurpose plaza at the University of Kanazawa is composed of a 12 mm-thick steel sheet without any pillars: it takes advantage of the curved geometry to optimise the distribution of weight.

Freeing the context
The relationship Ishigami establishes with the context has a dual nature: on the one hand, it is inspired by phenomena like the constellations, clouds and forests (like the KAIT Workshop); while on the other, the design reflection extends to the project and its surroundings. For example, in the House in the East of Japan, considerable fluidity is created with a hill that slopes in the same fashion as the house’s roof, creating an effect of perfection and harmony. In this sense, the book by Peter Wilson, Western Objects, Eastern Fields, is relevant: the concept of area corresponds to Western objects. If in some cases Ishigami’s work dialogues with existing things, at other times he does not hesitate to create an entirely new world for his works, or to strongly invade landscapes with mega-structures that call to mind Metabolism, where a large single gesture is preferred to subtle articulation. The project for the Culture Centre in Shandong province, China, is a covered walkway 1 km long, on a strip of man-made land surrounded by water: the allusion to the vernacular architecture of Chinese summer villas is evident. In the project for the Ferry Terminal in Kimmen, South Korea, the man-made hills call to mind the early hidden architecture of Kengo Kuma in anti-object style: hills that conceal an enormous infrastructure.

Sign up for our newsletter and get domus in your inbox
In this gallery: works and projects by junya.ishigami+associates
01 / 12
Share
Pin it

Freeing architecture
Ishigami’s designs must be defended, from facile criticism, for their dreamy, unrealisable or useless aspect. The project for the Chapel in the forest in China stands out: just 132 square metres of chapel in a forest with walls 45 metres tall. The walls, made in reinforced concrete, are excessively high and out of proportion: with the same amount of cement one could build various chapels. Ishigami’s idea of excess must, however, be seen as a cure-all. It’s not the norms, or the austerity of means or money saving that counts but rather the intention, the fact that a space can be compressed and then freed. What counts is the quality of the matter and its installation; the aesthetic message and the almost child-like alchemy that unites engineering prowess, space and landscape.

Aesthetics as the mother of invention
Upon visiting the exhibition, what comes to mind are the writings of Cyril Stanley Smith, who as early as the 1980s believed that aesthetic selection was key to evolution, both genetic and cultural. Without aesthetic curiosity, maybe we wouldn’t have survived at all, or we’d still be back in the stone age. For the emeritus professor in Science of Materials at MIT – as well as metallurgist – many of man’s inventions have appeared in decorative applications: the wheel, for example, first appeared in decorative jewellery and children’s toys. Innovation and discovery are not born under the pressure of need, and aesthetics takes the lead from function. Ishigami has a great ability to join science with poetry and head into uncharted territory. The world of architecture needs to imagine new solutions and go beyond its current preoccupations related to geometries, forms, actions, programmes, energy. In this sense, “Freeing Architecture” is a liberating act that ushers in a breath of fresh air.