On board the sinking ship? A report from the Chicago Architecture Biennial

With the oxymoronic title “Make New History”, Los Angeles-based practice Johnston Marklee, curators of the second Chicago Architecture Biennial, suggest that history could once more allow architects to look to the past to inform the present: “Look back to move forward.” 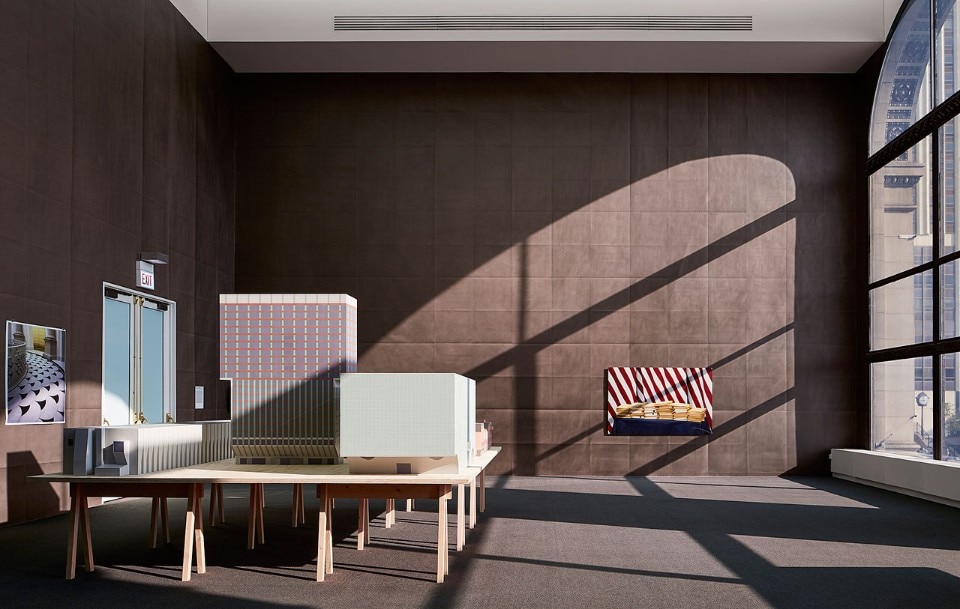 In his 1978 conceptual collage The Titanic, Chicago architect Stanley Tigerman manipulated the image of Ludwig Mies van der Rohe’s iconic 1947 Illinois Institute of Technology’s Crown Hall: one third sunk in Lake Michigan and two thirds emerging out of the water. The collage is both a repudiation and a celebration of the overwhelming presence of the master – Tigerman’s claims boundless admiration for the German architect and has, since the 1960s, lived in Mies’ Lake Shore Drive apartment, yet he fought against the banalisation of Mies’ aesthetic by an entire generation of architects operating in the Chicago area. In other words, the collage speaks of Tigerman’s complicated relationship with history and his criticism of architectural pedagogy and practice in 1970s’ Chicago. It summarised the attitude of an entire generation of architects that took a position and used recent and ancient history to move forward.

With the oxymoronic title “Make New History”, Los Angeles-based practice Johnston Marklee, curators of the second Chicago Architecture Biennial, suggest that history could once more allow architects to look to the past to inform the present: “Look back to move forward.” A post-modern revival seems to haunt the exhibition:  the most post-modern of all the installations being Sylvia Lavin’s Super Models, a remake of a series of models collected by Heinrich Klotz for the German Architecture Museum (DAM) in the 1980s. Aside from her fascination for miniature, Lavin’s work tackles issues of copy and authenticity.

The attempt to relate contemporary architecture to history is framed, fairly successfully, by Vertical City and Horizontal City, two displays that act as pendants and form the core of the Biennial exhibition. The revival of a revival, Vertical City is inspired by “The Late Entries to the Chicago Tribune Tower Competition”, an exhibition organised in 1980 by Tigerman and the Chicago Seven. In order to gather a contemporaneous cross section of architectural ideas and influence, architects were invited to submit alternative schemes for the 1922 Chicago Tribune Tower competition that generated 263 entries from the United States and around the world. The 1980 version of the Chicago Tribune competition was decidedly paper-oriented but, for Vertical City, each practice had to produce a 16-foot high model framed by the beautiful Yates Hall of Chicago’s Cultural Centre – this juxtaposition being the real confrontation with history. The towers seem merely formal exercises: 15 architects free to express their own fantasy, with no technical or legal imperatives. Despite  some interesting experiments – for example, London-based practice 6a architects produced a surprising object using wood-turning while Éric Lapierre borrowed the column form from the 365 student-housing project in Paris – and high-aesthetic objects – a golden abstract tower by Barbas Lopes Arquitectos and a black monolith by Barozzi Veiga – the whole lacked real curatorial statement or even legibility. The labels identifying each tower are all on the entrance wall rather than next to each tower, requiring an unnecessary effort of reconstruction by the visitors. Another trend emerging from the forest of skyscrapers is the undeniable revival of the collage – both 2- and 3D.  Like exquisite corpses, towers by Tatiana Bilbao Estudio and Sam Jacob Studio appear as particularly good illustrations of this tendency.

In “Horizontal City”, 24 architects, among which a number of young practices, were asked to select a photograph of an interior that would lead to the production of a large-scale horizontal model referring to the “rich history of representing interiors as a model of sociability.” All together, the field of plinths relates to the footprint of Mies’ Crown Hall (again!) and produces “a collective after image” occupying the space of G.A.R Hall. It may seem a little too like a school exercise but “Horizontal City” is still undoubtedly the most interesting proposal of this year’s Biennial. The carefully crafted study by DRDH Architects in London picked the timeless interior space of the pantheon, as seen in a photograph by German artist Thomas Struth, and produced a slick triptych-like plaster piece, “outside time yet central to architecture’s history, archaic yet absolutely contemporary in the abstraction of his platonic forms.” In another example of the exquisite corpse tendency, American architect Andrew Kovacs presents “Proposal for Collective Living II (Homage to Sir John Soane)” a colourful, intriguing and engaging piece, the take on history of which is to “make architecture from architecture”. Also compelling is the work of young practices using well-known precedents to rethink architecture by way of colour and material, and from the inside out rather than from the outside in: Maio from Barcelona looked at Duchamps’ work to create The Grand Interior, a pink landscape of interiors without walls; Bureau Spectacular from Los Angeles came up with an ambiguous domestic viewing machine made of fur and glass.

In between the vertical and the horizontal lie a few alternative approaches to history. Particularly noteworthy are the displays by the American architect, artist and preservationist Jorge Otero-Pailos and Swiss artist Marianne Mueller, both pieces working directly in response to the architecture of Chicago’s Cultural Center, the former home of Chicago’s Public Library. Documenting the building’s many lives, Mueller captures the clashes between the noble architecture of the Center’s 19th-century building and the contemporary generic materials of its subsequent additions. The intervention consists in a series of blown-up prints installed in the fine vitrines of G.A.R Hall which start a dialogue on the interior and counterbalancing the many models of the Vertical City. The Ethics of Dust is a series of casts resulting from cleaning pollution from monuments around the world, previously presented in London, Paris and Venice, among others. Otero-Pailos, the current director of Columbia’s preservation programme, suggests that architects should reinterpret fragments of history and transpose them, not in a post-modern historicism and pastiche but in a new and contemporary form of aesthetic that merges the architectural and artistic languages. Pollution, he writes, is “our longer lasting civilizational product.” It is, therefore, by rendering the intangible tangible and by carefully orchestrating the deployment of his piece in the spatial sequence of the Cultural Center (something that might, however, be difficult to read without Oter-Pailos’ indications) that this piece speaks of our relationship with ancient and recent history.

Visiting the 2017 Chicago Architecture Biennial does little to clarify how and why contemporary practices use history in their design work. “How do we make new history?” asked Kersten Geers during the University of Illinois Chicago (UIC) event “Now + Then: Occasional History”, another restaging of the 1982 Charlottesville Tapes event during which American, European and Japanese practitioners were invited to present and discuss one project each. Events such as “Now + Then” filled the opening days with promising discussions yet the landscape of contemporary practice is utterly different from that of the late 1970s and early 1980s. Faced with a theoretical and ideological vacuum, against whom and what can young architects take a stance?

Although, as stated by the artistic directors of the second Chicago Architecture Biennial, “the biennial format lies at the core of architecture’s cultural and exhibitionary project: a forum to reach and produce new audiences,” the lack of a strong curatorial stance – now all too often the case with biennials curated by starchitects – might suggest that the architecture community is simply overloaded with an abundance of events that swamps people’s time and imagination. Is the biennial ship sinking?