The first move was the restoration of the site to its natural conditions, involving the removal of conflicting features that had been superimposed. Only then did Chipperfield erect this private bungalow, ensconced in the hills with robust brick columns. 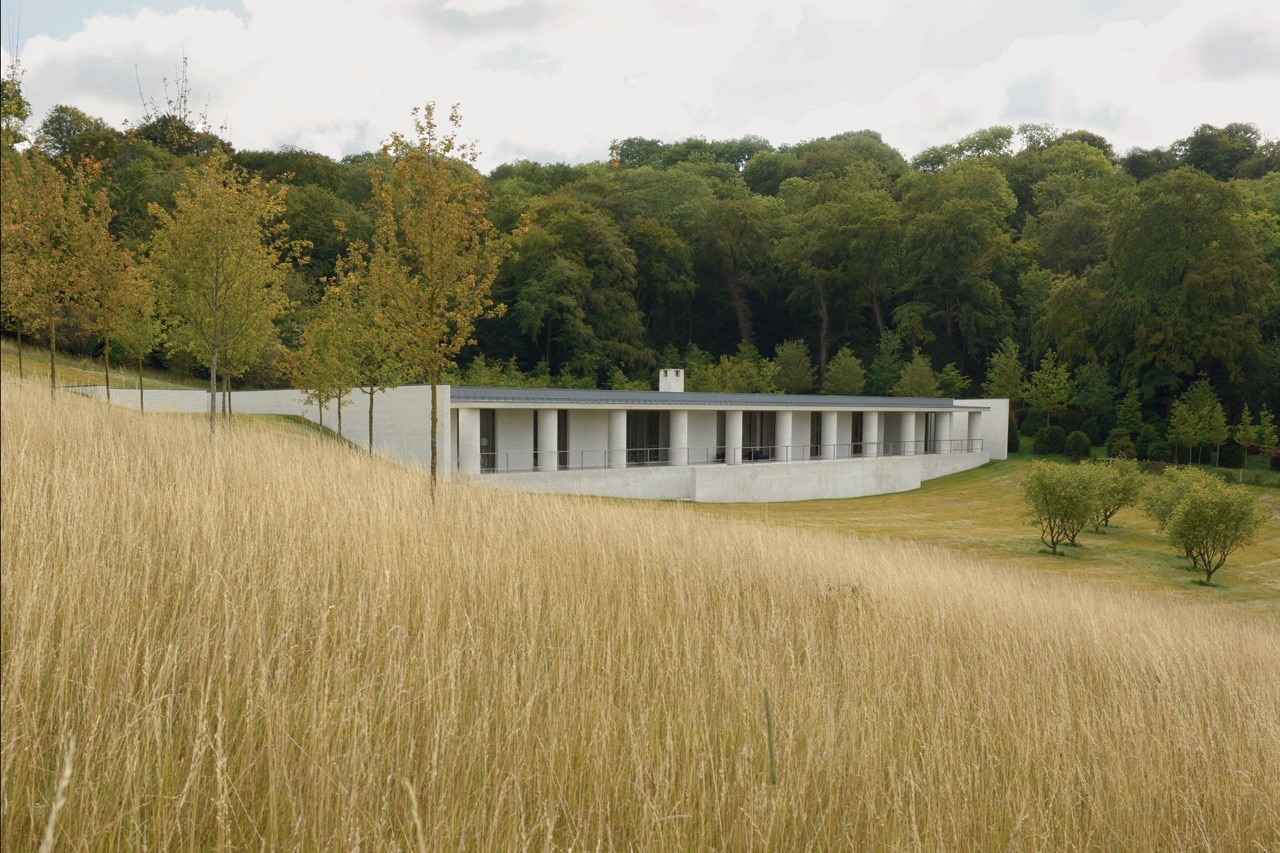 This article was originally published on Domus 987, January 2015

This family house is located on a large plot in the Chiltern Hills between the villages of Skirmett and Hambleden.

The Chilterns are part of the system of chalk downs that run through Eastern and Southern England with over 20 per cent covered by woodland, making it one of the most heavily wooded areas in the country. It has been designated an Area of Outstanding Natural Beauty since 1965. The site was previously occupied by a two-storey house with a number of outbuildings including two garages, a summer house, large stables, a gym, a greenhouse and an outdoor swimming pool. This array of structures, together with hard landscaping, had accumulated in an ad hoc manner with little relationship to one another or to the environment.

The proposed development presented an opportunity to restore a typical landscape by removing all conflicting features that had been superimposed onto it. In addition, the conifers and suburban planting were removed from within and around the original woodlands. The mosaic of small fields is reinstated by restoring the native hedgerows, while areas of new native woodland planting have been identified and woodland management introduced. Presenting itself as a large earthwork, like a dam sitting on the cusp of the slope, the singlestorey house is embedded in the field facing southwest towards the valley.

A generous loggia stretching across the whole width of the building mediates between the private interior space and the expansive landscape. The main living spaces open onto the loggia, while the ancillary rooms, further into the house, open onto smaller courtyards. All the courtyards differ in character and provide close contact with nature as opposed to the long-distance views into the valley from the main living quarters.

The building, accessible via a ramp at the northeast of the site, is essentially buried in the landscape. The largest of the four sunken courtyards becomes a working area reminiscent of the farmyards in the Hambleden Valley. The entrance courtyard provides access to the various areas of the house and connects to the land below via the loggia. This opening also separates the guest quarters from the main body of the house. The concrete roof is covered with topsoil from the site and planted with native grass, while the walls are made of brick, left visible both inside and out. The white colour of the bricks and the lime mortar is reminiscent of the chalk beneath the house. On the one hand the house appears as a natural escarpment in the landscape, while on the other it affirms itself as a man-made structure expressed by the robust brick columns placed in front.

David Chipperfield Architects, Fayland House, Buckinghamshire, Great Britain. Drawing of construction details of the concrete roof, which is anchored to the loggia’s columns

David Chipperfield Architects, Fayland House, Buckinghamshire, Great Britain. Drawing of construction details of the concrete roof, which is covered with topsoil from the site and planted with native grass