Facing a complex site, Shogo Aratani Architect & Associates create a living space from the combination of three different volumes connected with stairs and slopes from the entrance to the roof. 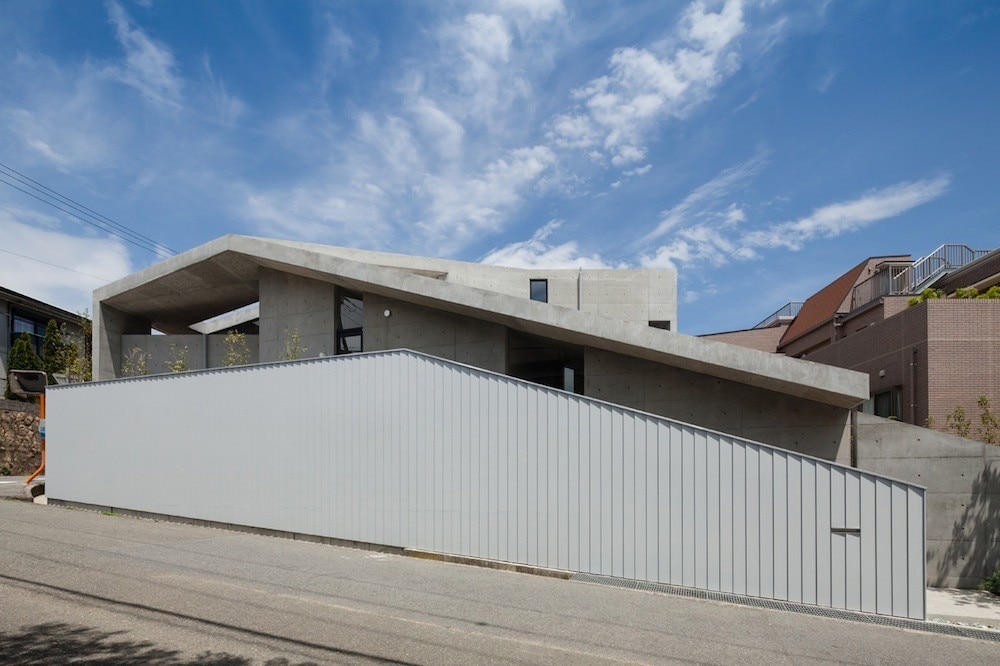 The site is located on a corner lot of a fancy residential area on a hill, and faces toward sloped roads on the west and north sides. This residential area was developed about a half century ago. As time has passed, small-scale developments have been undertaken due to dividing and uniting lots.
Just like the other sites, due to an arbitrary assumption of the developer, this site also has a recently built high wall on the west side, as if rejecting an approach to the site. However, construction of an in-ground garage may have been assumed, and there is level land and a slope to connect the 3m height difference on the southwest side. There is also a slope from the road on the north side, and the flat ground is about 1m high. The flat ground was probably set based on the neighboring lot. Therefore, this lot has 3 levels due to the relationship between the roads on the west and north sides, and the neighboring lot. We thought that a new development of another level was pointless. No matter what the situation was, the context of this location included the current situation and it was more natural to follow the context. Three floor levels, adjusted to each height, were individually made. By connecting these, the entire space was constituted.

Based on the required volume, the three areas were partly layered and connected with stairs and slopes from the entrance to the roof. Volume studies were conducted in order to create a form to materialize such activities. The activities brought out from the characteristics of this site constitute this building, rather than the building determining people’s movements. As a result, the building was constituted with three crisscrossed monolithic forms, as if they were responding to the road on the west side that slopes up from south to north. The west-side volume in the lowest part of the site has an entrance and a guestroom, and the southeast volume in the highest part has private spaces such as a bedroom. The third volume connects them and also has a garage that is accessible from the north side, and a living space that is the center of living.