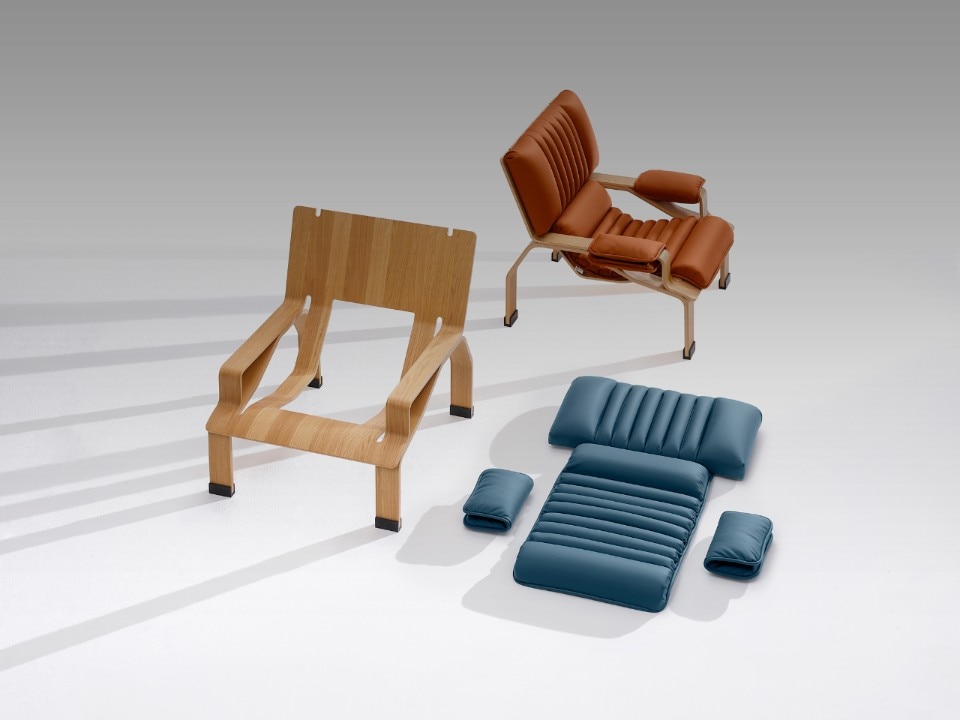 The Supercomfort armchair and the Multichair transformable system, both designed by Joe Colombo, are the latest additions to the TIMELESS collection that the Italian company is presenting at Rho Fiera from 7 to 12 June 2022.

The second half of the 20th century was a period of great ferment and growth for Italy. Especially for the world of design, which was able to shape the new needs and desires of Italians with projects that were at the same time revolutionary, accessible and popular. The central moment of this historical phase was the famous 1972 exhibition at the MoMA in New York "Italy: the new domestic landscape". Curated by architect Emilio Ambasz, the show presented the leading Italian designers of the time to an international audience.

"It was especially thanks to this exhibition that a country with a still weak and controversial modernity as Italy suddenly became the most advanced benchmark for an eminently modern discipline such as design. Therefore, it offered the world a model and a design method – even more than a production one – destined to be adopted and imitated over and over again at an international level," commented historian and curator Silvana Annichiarico.

The Italian company B—Line was born out of the legacy of the great design masters and the urge to perpetuate their contents. Its marked penchant for reviving the icons of the past has brought back timeless pieces such as Rodolfo Bonetto's Boomerang, the armchair that symbolised Italian design in the Sixties and Seventies, as well as Joe Colombo's Ring storage unit, a great precursor of the same modularity applied to contemporary interior design, and Kazuhide Takahama's Esa, the polygonal pouf so essential and rigorous that it is still relevant today.

And, above all, the trolley that made history, the Boby sliding container, silent accomplice and generous servant of our daily activities, so transversal everywhere. It is no coincidence that Boby is part of one of the most prestigious museum collections in the world: that of MoMA, the same institution as the above-mentioned legendary exhibition.

B—Line complements its re-editions with contemporary furniture, the result of collaborations with international designers. B—Line's work is therefore not only to celebrate the past, but above all to reinterpret it, to analyse its unchanging variables and to understand how lifestyles change over the years. What remains is a passion for industrial research, a strong stylistic and aesthetic identity, formal cleanliness and maximum product transversality.

The TIMELESS reissue collection will be presented by B—Line at the next Salone del Mobile.Milano, from 7 to 12 June at Rho Fiera (Hall 10 / Booth C09). Protagonists of the exhibition will be two new entries: the Supercomfort armchair designed by Joe Colombo in 1964 and the Multichair transformable system designed by Joe Colombo in 1970 and presented this year in a special edition in Kvadrat's Sprinkles Febrik fabric.

The Supercomfort armchair is the result of a meticulous ergonomic study on posture and evolved from the idea of using a single cut out and jointless veneered sheet. The manufacturing process was optimised during work progress by breaking down the structure into two sheets, one forming the backrest-seat-armrest curve and one accommodating the legs. The upholstery consists of an anatomical booster cushion sewn into sectors with differentiated sections that afford maximum comfort and is completed by generous armrest covers wrapped around the frame.

Chair or armchair for conversing or relaxing in, Multichair is a convertible system based on the different combinations of two elements, which can also be used singularly. The cushions have a steel structure covered with polyurethane foam padding and stretch fabric upholstery, while the various arrangements are created by fastening the leather belts and chromium-plated satin-finished steel buckles together in different positions. Part of the MoMA and New York Metropolitan Museum of Art permanent collections.