A floating pool to reconnect us with nature

+ POOL, conceived a decade ago, is on its way to completion. In the meantime, many things have changed, mainly for two reasons: climate change and pandemic. We talk about it with cocreator Dong-Ping Wong. 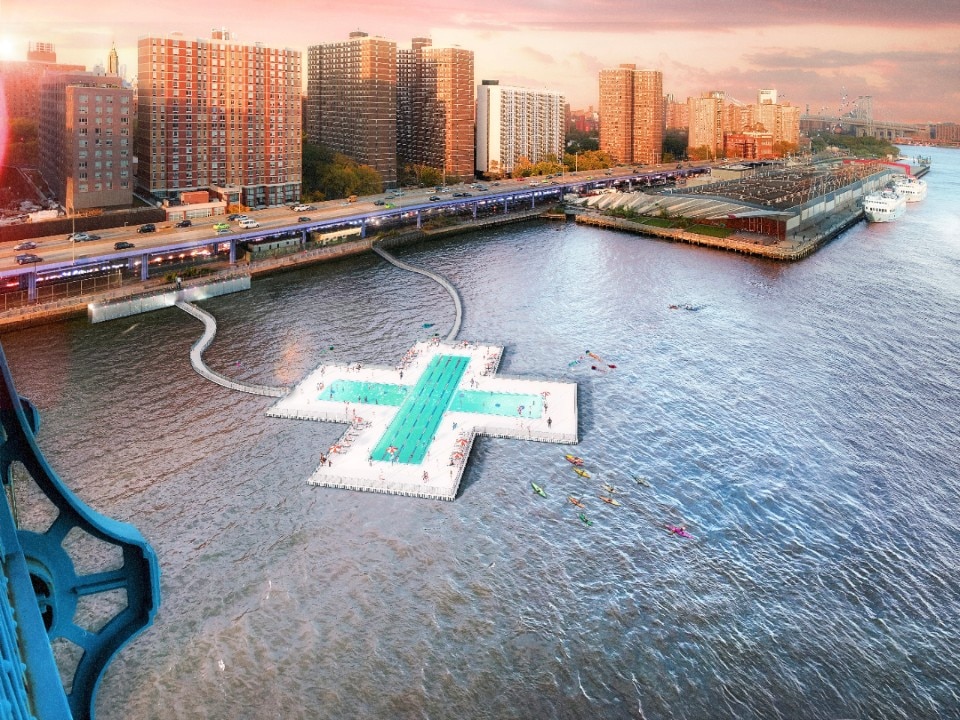 “+ POOL is a plus-shaped, water-filtering, floating swimming pool, designed to filter the very river that it floats in through the walls of the pool”. This is what anybody can read in the “about” section of the website dedicated to one of the most futuristic projects that we’ll see in the next few years realized in Manhattan – or around the Manhattan island, to be more precise. On the website you can read as well that New York is an incredible place, “where almost everything can be done, except swimming in the river” – ok, this sounds a bit emphatic, and it’s not completely true, since an event like Brooklyn Bridge Swim gathers every year some brave swimmers that face currents and pollution, dipping into the East River. Still, it’s lapalissian that today nobody would take the act of taking a bath on the Lower East Side as normal as it was perceived during the second half of the 19th century, when – surprise! – floating baths were a thing in the East River. Then, more or less in the timespan between the World Wars, the strait (yes, East River is a strait and not a river) became a place too polluted to swim into, and the city moved some baths elsewhere and dismantled the others.

Yet, in a few years, people will be swimming in the East River again, thanks to a technologically advanced pool. So, paradoxically, in order to immerse in a safe portion of water, humans will need it to first be cleansed of the devastating effects they themselves have caused in less than two centuries.

“The project idea goes back to 2010, and we made it public the following year”, recounts Dong-Ping Wong, founding director of the architecture studio Food New York, and one of the “group of friends” that started the + POOL. The others are Archie Lee Coates IV, Jeffrey Franklin, and Oana Stănescu. After a first fundraising, in 2015 they created “Friends of + POOL”, a non-profit association that allowed to raise money. The name echoes that of “Friends of the High Line”, the organization that maintains the linear park: as the High Line, and many other initiatives innovating New York, the floating pool lies in an interstitial space between public and private domains. Managing director of the project is Kara Meyer.

In ten years, the biggest hurdle in developing the pool, Wong explains, has not been on the design or engineering sides, but all the politics involved with the realization. “It’s been really long, really slow”, he recounts. Then, at the beginning of this year, there was the “big milestone”: EDC, the Economic Development Corporation of New York City, a big non-profit organization that works as a city agency, annoucend that it was taking on the project, and running with it. “Not just responding to our work, which is incredible”, he comments. “So the stars aligned in the last year and a half, I guess. It’s still four years away, but this is one of the first times that politically it feels like we have a momentum”.

Read also: A walk on the High Line

I ask Dong-Ping Wong if a renewed attention to public space was raised in New York during the pandemic, and he points out that it certainly was, but it's important not to undervaluate how much it is in continuity with a longer evolution of the city. “Something that happened during the Bloomberg tenure as the city mayor, was a big push on green space”, he explains. Many new bike lanes, redoing of old parks, and building new ones, as the Brooklyn Bridge Park, the High Line itself, and, “for better or for worse”, Little Island, “it all happened in the last ten years”. And now, Wong says, the interest is moving to the waterfront, as “the idea of water as public space is still kind of new in the city, but it’s much more prevalent that it was just a few years ago”.

Read also: The city and the pandemic: a summer in New York

Bringing people closer to nature, and nature closer to people, has not just a recreational value, but it is an essential step to take conscience about the great emergency of our times, climate change. “With the pool, one of the things we wanted to do was just to get people on the water”, says Wong. “Get people in the river. And literally, like, touch the river water”. People can’t understand climate change, can’t even see it, while they conduct their life sealed in their apartments like many New Yorkers do. And Wong is pretty sure that “one of the ways you deal with climate change is to make people connect with the climate”. To connect with nature, and with water: Manhattan is an island, after all. Something is already happening, as an effect of the pandemic. But there’s still a lot to do, and as an architect, Dong-Ping Wong thinks that it’s essential to consider “how can architecture connect you with your environment, as opposed to seal you off from your environment”.