Patricia Viel, from boats to architecture: “A long duration is a guarantee of mutual wisdom”

Love of the sea, the rigorous approach taught by nautical design, but also redundancy as a primary requirement in urban regeneration. A wide-ranging interview with the Milanese architect. 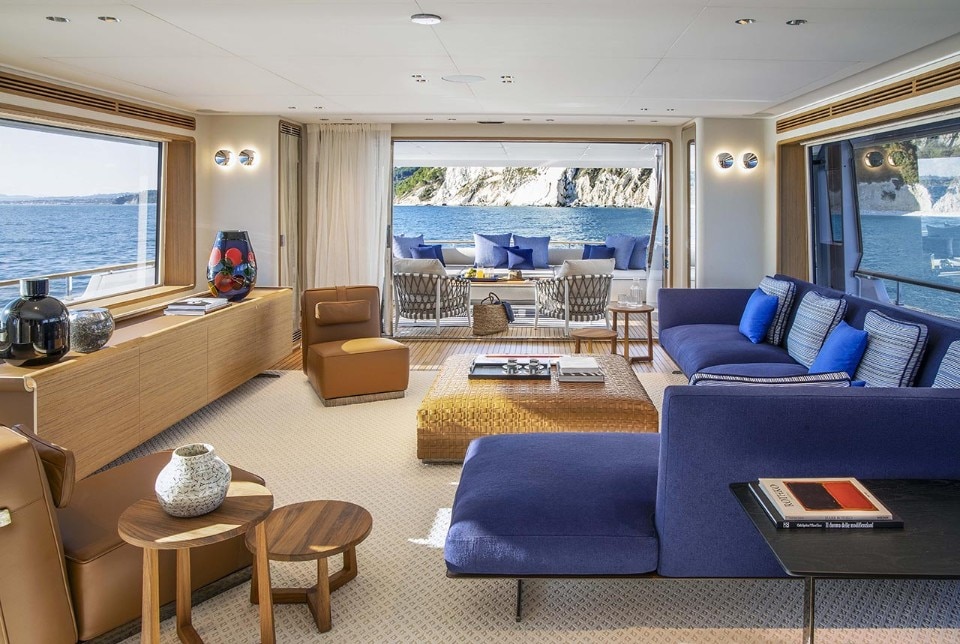 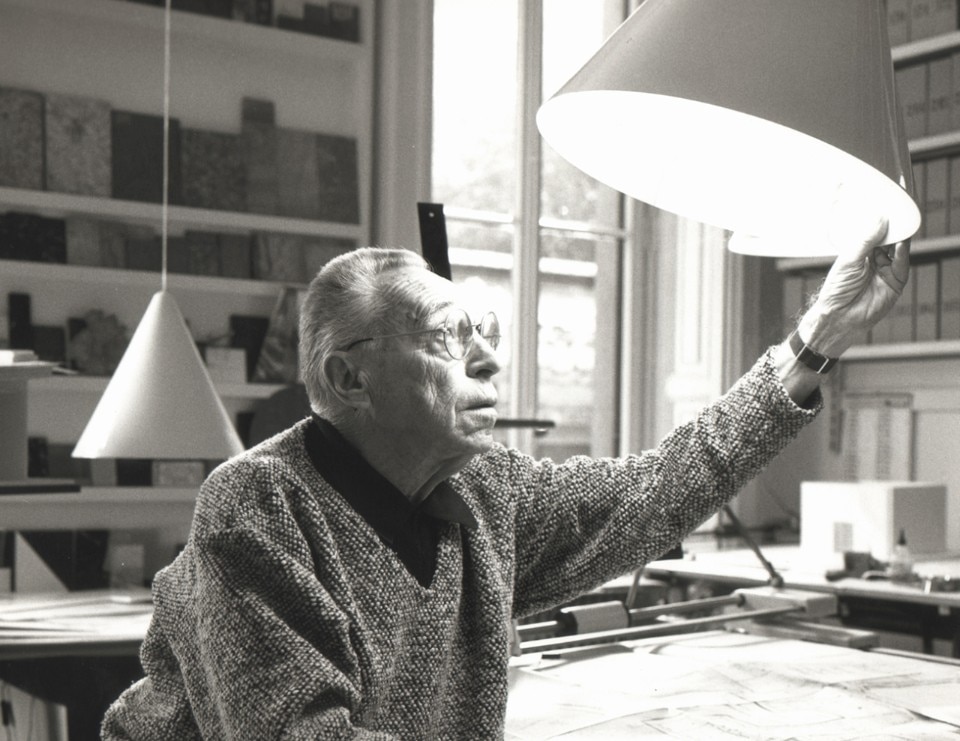 Together with Antonio Citterio, Patricia Viel leads one the most Milanese and at the same time international architecture firms in Italy. She is used to measuring words – which she nonetheless dispenses with spontaneity and generosity – just as she controls the line and impact of her architectural interventions.
For the Ferretti Group, together with Citterio, she has just finished designing the interiors of the Custom Line Navetta 30, while Filippo Salvetti focused on the exteriors of this yacht that combines a classic, almost timeless style with the dynamism of a horizontal development, in a design that tends to eliminate the vertical elements that link the decks.

What characterizes this yacht?
When designing boats, we make a very clear division between the elements that complete the boat and are part of it (like the hull and the decks) and the furniture. This is a very unusual approach because naval design often blends these levels by mixing the interior elements with the furniture. But I believe that it is precisely this distance, this detachment, that makes the design of the interior spaces very coherent with the nautical world: it respects its forms and requirements, and at the same time allows the design, the style, to really connect with the pieces of furniture, which are mobile objects that are not strictly tied to the design of the boat.

What are the main parameters one should take into account when approaching the design of a boat?

The naval environment has very specific requirements, perhaps even more specific than the automotive industry, because the conditions are more extreme and because mistakes can sometimes be fatal. We try to stick as closely as possible to what is really necessary because the guidelines are linked to a precise volume of the boat, which has to meet specific parameters to fit into this or that category. When dealing with these volumes, it is important to know how to manage the integration of technological elements, such as facilities and safety systems. Durability is fundamental for this kind of object: the sustainability of a naval project consists first and foremost in its ability to survive itself, to be able to refit it, to be able to update its systems. This requires integration between the actual naval design, which is that of the hull and its structure, and the internal lines inside the boat.

Does cultural sensitivity play a role in this, too?
Yes. Our cultural sensitivity leads us to turn life at sea into an experience that is literally very close to the water – that’s why we try to open up the spaces between them and towards the outside deck as much as possible. We’re not trying to make luxury floating homes: a ship is a ship and its context is the sea. The openness, the continuity between interior and exterior, and the stylistic features of the interiors inspire you to dress in a much simpler way, to walk barefoot, to live an informal life.

I can tell from the way you talk that you are very familiar with boats. Do you like going out to sea?
I like the sea very much. At least two or three times a year, when I can, I go on small cruises with friends. For all those who are used to a life full of relationships, a holiday at sea is extraordinary, because it allows you to establish a contemplative relationship with the context, with which you don't necessarily have to be proactive, but which allows you to really focus on what's going on around you. When you are at sea, but also in the mountains, having an intense relationship with nature puts you back where you should be more often – on the edge of something bigger than yourself. I always say that I would like to grow old next to a big tree, which reminds you of what it really means to last.

And what does nautical design teach to an architect?
I think it teaches us to build a relationship with space that is not always measurable in the same way. This was especially useful to us last year when we found ourselves thinking about how to increase the minimum spaces in our house, where we had to work, look after children or dogs, cook or clean at the same time. The relationship with space really needs to be refined precisely because, in reality, it is very random, it came to us from an ancient tradition from another century: today the complexity, the interaction we have with even different worlds requires much more sophisticated attention. If you approach nautical design, you'll realize that when you design the guest cabin bathroom, a centimetre there is different from a centimetre in the main deck saloon: they’re different measurements. You don't need a huge space, you need a well-designed space.

People have talked a lot about post-pandemic regeneration and the role of architecture, do you think that a misleading view has emerged from the debate?
The most misleading and irritating is the concept of “social distancing”. It's a really stupid concept: it's true that physical distancing between people has been very useful and that it has forced us to build new social relationships, but in general human beings do not tolerate social distancing, they live off social relationships, and they seek closeness in every way. Having said that, I think we have learned that there are risks and that in an enlightened Europe, let’s call it that way, capable of building up over the centuries a very sophisticated food discipline and personal hygiene habits that are practically ours alone throughout the planet, we are still at risk. Caution in the management of everyday life must take into account potential accidents that cannot be foreseen and that can only be fought with resilience, i.e. the ability to react to that event. And in this case, I am not just talking about hygiene or the 'contactless' aspect of our interactions, but also about hydrogeological instability, the risk of avalanches, and the obsolescence of infrastructure.

How do we cope with risk?
We have to start to have a perception of risk such that we have to put on both belt and braces: to be a little less efficient, a little less adherent to what we think we can expect, but to create reserves. So creating more space in hospitals, more space in offices, more space in logistics, making ourselves independent concerning the use of one and only one means, in being more generic, in making machine tools more modular... these are random examples, but to make it clear that it is not just a health problem, just as it is not enough to think of acting on the big decision-making centres: it is not enough to build big hospitals when instead we need a far-reaching care network. The ability to adapt to unpredictable situations must be part of the standard. And that means: do you need four buses? Well, then you should have five.

So how is this redundancy reflected in architecture?
That's what urban regeneration is all about! It is mainly there that we have to work because cities have been built following simple systems – the street of sword makers, the street of cobblers – which have adapted over time, so the city itself has to be reinterpreted, and I don't see any problem in doing that. Of course, what has to happen is that the flats have to change, the way of looking at the city has to change, the ground floor has to change, the boundary between public and private has to be more blurred, more integrated, more collaborative. We were talking about redundancy: redundancy in everything public and collective must compensate for the scarcity of resources in the private sector.

TOne of the major projects completed this year by Antonio Citterio Patricia Viel studio is the San Babila Business Center.
The work was carried out following a 1953 project developed during post-war reconstruction – the best example of urban regeneration – which originally was a sequence of buildings constructed by BBPR, Gio Ponti, Eugenio Soncini, and Antonio Fornaroli. The bombed-out city they rebuilt was a 19th-century city, where the block had certain ratios of solids and voids, and their design had already completely scaled its dimensions, crossing it from one side to the other. What we did was to reactivate the pedestrian vocation of the ground floor – because we are talking about a great pedestrian area, Corso Vittorio Emanuele, but also the Gallerie and Corso Europa, which will soon be pedestrianized – as well as creating outdoor spaces such as terraces, spaces for conviviality, places for self-representation of the organization, which worked very well. We redesigned the Soncini façade a lot, because it had paid the price for poor, low-performance construction, and for the rest we worked on recovering volumes, enhancing this beautiful feature whereby when you look out from Corso Europa, you walk through a building, cross a courtyard, and find yourself on Corso Vittorio Emanuele: a chance to perceive the city in a very special way.

You have been working with Antonio Citterio for decades. How is it?
We argue constantly: I have the great luck of dealing with a good-hearted man who actually enjoys challenging me on certain ideas, not so much to convince me otherwise but to check that I really believe in them. Antonio has an extraordinary natural talent, very precise intuitions, and it is precisely because he is intuitive that he is less constant in managing a job. I, on the other hand, am very determined and I never give up on a project, so our way of working is different but also complementary. Then it's the long duration of our collaboration that means a lot, it's a great guarantee of mutual wisdom. Nothing can happen to us anymore.

Yours is the biggest architecture firm in Italy. The key to your success is an attitude, a language, or the outcome of an organizational process?
In the 1990s and early 2000s, we basically only worked abroad, and this helped us a lot: the design world outside Italy is extremely competitive and very demanding. This forced us to invest in digitalization. And being Italian, we were certainly advantaged: we work on projects in an interdisciplinary and inter-scalar way, which is a rather unique approach on the international scene. From those markets, we learned what it means to have a profession that is managed and developed as a business, with real investment, and we also understood that the architect never works alone. And I'm not just talking about the plant engineer or the structural engineer, but also the good lawyer who can find a way to intervene in public space when you are constrained by regulatory limits, the art consultant, or the certification consultant who can introduce you to particular themes and certain environmental qualities. And then you also have to be confident: we have never given up, and even when there have been difficult years we have always invested in the studio, bought the software, looked for new people: you must have a plan.