Michel Desvigne. Landscape comes before everything else, even architecture

The French landscape designer defends the priority of landscape architecture as a basis for an enlightened city, citing the big American parks built in the late 19th century. 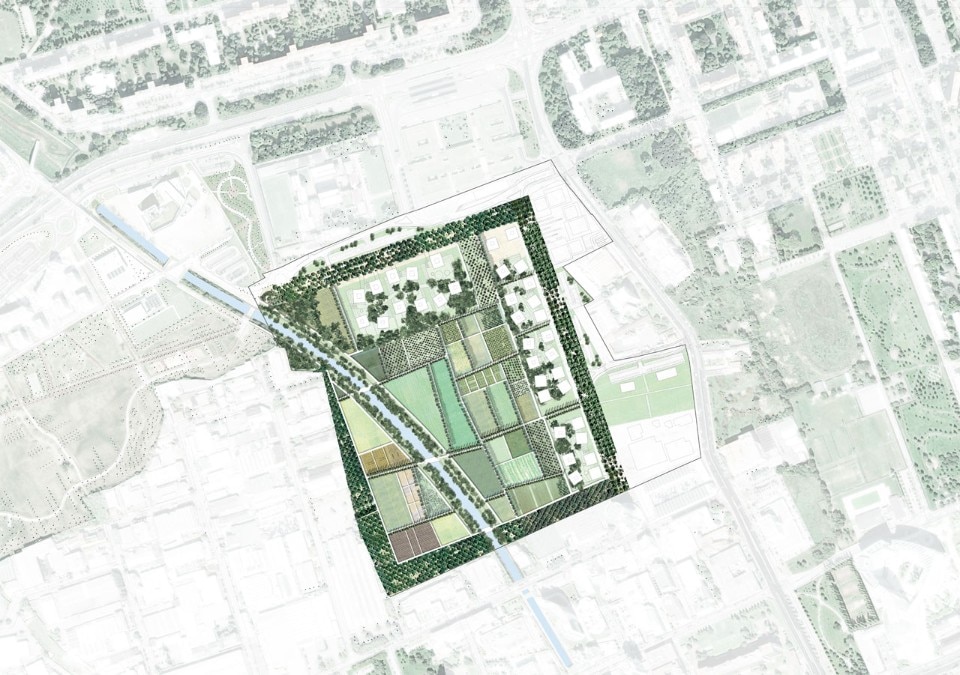 Attached to Domus 1028, DomusPaper. Super interiors, landscapes, cities tells the evolution of urban spaces starting from the inside, that is, from the organisation of space that occours in the East and the West in what is today’s globalization. It talks about famous houses, new formats for public libraries, social housing and solutions to deal with humanitarian emergencies. Then you can find collective rituals like Burning Man in the words of Pierre Restany, Robin Hood Gardens at the Venice Architecture Biennale, an interview with the landscape designer Michel Desvigne and much more. DomusPaper will be distributed free in Milan during the Brera Design Days.

“I have worked as a project leader with numerous Pritzker Prize winners without experiencing any rivalry regarding the respective competencies. Magazines are the ones that turn the tables and make it seem as if architects were in charge of our field.” My encounter with Michel Desvigne is starting out with an uphill climb. He’s a cordial man with a smile on his lips who enjoys employing verbal ambiguity to win you over to his side. It’s his way of snuffing out the fuse of polemics he lights at the expense of his interlocutor. He mentions the ombrière designed by Norman Foster for Marseille Vieux Port – a mirrored canopy (“a gadget”) offering shade and shelter to pedestrians.

Specialised magazines and online publications, however, have left readers in the dark about the gigantic renewal of which the canopy is but a tiny part. The master plan for the regeneration of the Vieux Port and all the public spaces of the city centre involves 400 hectares and 200 million euros – and the work is being led by Michel Desvigne Paysagiste. The project is currently underway (MDP’s contract still has six years ahead) and in 2014, it won the European Prize for Urban Public Space. “Is Domus one of the culprits, too?” I enquire. “It doesn’t matter. I’ve moved on,” he jokes.

Michel Desvigne’s career began over 30 years ago, when he and Christine Dalnoky became the first resident landscape architects at the Villa Medici in Rome (1986-88). To him, architectural dominion is not a question of ego or a personal gripe, rather it goes against his design vision. He underlines this more than once during our conversation at the Triennale di Milano in late June 2018. We are there for a symposium on city landscapes, where he spoke of the state of the art and the philosophy that informs his proposals for a new neighbourhood in the Bisceglie quarter of Milan called Seimilano (with housing by Mario Cucinella) and for the cultural centre GES2 by Renzo Piano in Moscow.

Increasingly, we are reconnecting old sites and redeveloping brownfields, of which big cities have many. Landscaping is key. This is not the biased viewpoint of one professional, but something that’s good for everyone.

“The landscape is a prerequisite” is one of his mantras. “Increasingly, we are reconnecting old sites and redeveloping brownfields, of which big cities have many. Landscaping is key. This is not the biased viewpoint of one professional, but something that’s good for everyone. The landscape must go back to playing its most ancient and historical role: preparing the terrain for future use. To do this, a certain simplicity is needed, plus a rootedness in the history and context of the place, even more than is required from architecture,” says Desvigne. The point is to use those origins in the right way without allowing them to become a marketing tool. He speaks of the trend where architecture is made to be photogenic, and says it is seen in landscaping, too: “It happens because in the beginning, vegetation is never spectacular. So people tend to make superficial designs that turn into unwieldy and ridiculous objects of an unsuitable scale. They are useless and destined to have a short life. Our profession is a serious one. We have great responsibility.” Here, he sounds like Professor Desvigne.

Indeed, he has been teaching at Harvard for 20 years. In Mendrisio Switzerland, he teaches at the Academy of Architecture. And he has been the president of the National School of Landscape Architecture in Versailles since 2008. “I much admire the park systems designed in the late 19th century by Frederick Law Olmstead in the United States. In his work, the building of the landscape is seen as the creation of the necessary conditions to construct the city. We must first understand the landscape in order to accompany it through a transformation that will lead to coherent development. Cultural action is required.” This is the approach followed by the French school of Desvigne’s masters, Michel Corajoud and Alexandre Chemetoff. Each of the three men has been honoured with the Grand Prix de l’Urbanisme. The paramount importance of the landscape in large-scale urban projects has led increasingly often to the nomination of landscape architects as project leaders in charge of a team of urban planners, engineers and architects. This is not only the case in France.

“The design for Seimilano was made four years ago, free of any reference to the architecture,” Desvigne explains. “Claudio De Albertis imagined the landscape as the condition for the renewal of the area. The relation between city and countryside is the archetype of the entire project, which takes inspiration from the agricultural layout of the Po Valley and its beauty.” The Seimilano project concerns the former Calchi Taeggi quarry plus other derelict and unused municipal properties. A 200,000-square-metre park will connect to three parks: delle Cave, dei Fontanili and delle Crocerossine on the southwestern edge of Milan.

We abandon the subject of social implications to talk about the city landscape symposium. MDP currently works in 17 countries, meaning it has a vision rooted in concrete reality. The United States, he says, “was way ahead of the times one century ago”. In his opinion, France is now at the lead, although he immediately defends himself from hypothetical accusations of partisanship, and substantiates his judgement. “After the master plan for Grand Paris, an interesting phenomenon was seen in France. All 12 of the country’s metropoles drafted an urban plan for the future, meaning 2030 or 2050.” In Europe, the second good example he names is The Netherlands, “a country that has always demonstrated design prowess, competence and awareness.” Then there is Russia, namely Moscow. MDP worked there in 2011-12, invited with other landscapers to draft a master plan for the Skolkoro district on the city outskirts. That was a larger scale than Desvigne’s current work close to Gorky Park, where a small and lovely birch grove is found in downtown Moscow. It completes Renzo Piano’s conversion of the electric power plant GE2, due for inauguration at the end of 2018. A mental image of the 100-birch-tree wood designed by Desvigne 30 years ago for the social housing project on Rue de Meaux (also by Piano) comes to mind immediately. “I thought about how to confer depth to a small urban wood, how to make the space infinite and allow the eye to wander into the sky,” he specifies.

Rebirth was also the theme of a 2016 project for the Detroit East Riverfront designed by Desvigne and his partner, the Belgian architect Inessa Hansch. The concept aims to sustain the new course of a city devastated by bankruptcy and the exodus of citizens following the decentralisation of its factories. “A park along the river to connect the city with pedestrian walkways will be the preliminary condition for future development, the framework for a city wanting to refind its value,” says Desvigne. “It is a delicate operation that is proceeding in parallel with public engagement to provide citizens the opportunity to participate in the planning process led by the Chicago-based firm Skidmore, Owings & Merrill. Difficulties are many; economic problems are slowing down progress, but the city’s planning director Maurice Cox is very determined.” Big public works that take a long time and require enlightened politicians. A case in point is the renewal of Bordeaux, on which Desvigne has been working for 14 years now. There, the mayor actually purchased the blighted riverfront land that was destined for redevelopment. “In our line of work, projects take 30 years. But you know how time flies when you’re having fun!” he quips. There’s nothing gadgety about that, is there?

Opening image: in Milan, Studio Michel Desvigne MDP it is in charge of the 200,000-square-metre park Seimilano, which includes the former Calchi Taeggi quarry plus other other derelict and unused municipal properties.