A jewel made in Singapore

No other airport, no other transportation hub is so throughly an extension of civic life as the Jewel at Changi Aiport is. 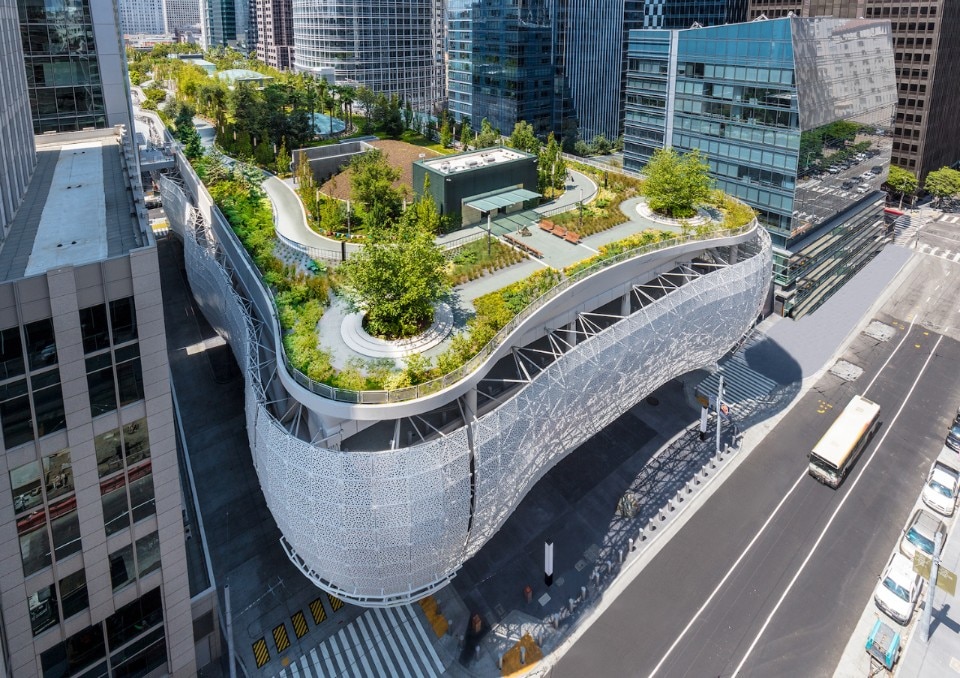 This article was originally published on DomusAir n.3, dicembre 2021.

Fulfilling its mission as a connector between the existing terminals, the Jewel at Changi Airport reimagines the center of an airport as a major public realm attraction. Combining two environments — an intense marketplace and a paradise garden — it creates a new community-centric typology as the heart, and soul, of Changi Airport.

As architects, we are responsible for shaping a project’s larger civic role of enriching and enlivening the community and fostering public life. Unlike any other airport in the world, Changi Airport has, from its beginnings, been a place where the local communities come together. Whether it is to find refuge in the air conditioning, study for exams, practice dance routines with friends, or simply enjoy a meal together. No other airport, no other transportation hub is so thoroughly an extension of civic life. Through its programming and attractions, Changi Airport has moved beyond the idea of the airport as purely a transportation hub.

In 2012, Changi Airport Group held an international competition to develop a lifestyle destination that would include retail, aviation facilities, some landscaped spaces, and ‘a great attraction’ which was left undefined. Our team, working with Singapore-based CapitaLand, sought to achieve a timeless space. One that, unlike the other more theme park-like ideas being proposed, would be a place where you would return, time and time again. The idea of a great central ‘Garden like no other’ was embraced, authentic to Singapore’s position as the Garden City. It would be where ‘Singapore meets the World and the World Meets Singapore’ we wrote in our essay contribution to the Jury (who unanimously awarded the project to the team). Conceived to serve the people of Singapore and travelers equally, it was envisioned as a place that would leave visitors with deep memories and create an iconic gateway to Singapore — reinventing what an airport could be.

Jewel represents a new type of enclosure, combining structure, façade, and environment. Based on the geometry of a torus, the shape of the 135,700 square meter building accommodates the programmatic need for multiple connections in the airport setting. Spanning more than 200 meters at its widest point, the glass and steel roof structure has only intermittent supports, which results in a near column-free interior. At the heart of the glass roof is an oculus showering water 40 meters down through a multi-story garden, creating dramatic visual effects, including daily rainbows. The amphitheater-shaped garden (open 24 hours) includes over 2,000 trees and 100,000 shrubs from around the world. Nature trails encircle the garden with vista overlooks and quiet areas of repose. The upper levels host multiple attractions, including a glass-bottom fog bridge, jumping nets, play areas, mazes, as well as multiple gardens and a topiary walk.

Adjacent to and accessible from the garden are over 200 retail shops, 90 food and beverage outlets, movie complex, transit hotel, and grocery store. Located less than 30 minutes by public transportation from the central business district; downtown shopping area; and populous East side of the country; Jewel is truly an extension of the city fabric. Positioned outside of terminals, before security checkpoints, and directly linked to public transportation, Jewel is entirely publicly accessible. Directly connected to Terminal 1, it resides between Terminals 2 and 3, which visitors reach along new elevated, glazed linkage bridges. To enhance accessibility, a new meeter-greeter hall, bussing center, taxi system, and 3000 car parking facility serving multiple security zones, and both short and long-term parking, was carefully integrated within the structure. New aviation facilities include early check-in and baggage handling for travelers who would like to explore Jewel enroute to their destination.

From digital engineering analysis to automated fabrication, and from precision manufacturing to on-site assembly, the structure represents radical advancements in emerging techniques that are still new in the hands of architects, fabricators, and constructors. To design and build Jewel, we brought together an exceptional group with a wide range of expertise, including retail specialists, airport planners, structural and façade engineers, horticultural gurus, day-lighting experts, artists, exhibit designers, and water-feature and lighting specialists. We also had the good fortune to work hand in hand with two exceptional clients: CapitaLand, our longtime partner, and Changi Airport Group, whose operations and service had been named by Skytrax the best in the world seven years in a row at that time.

The key to the project was to balance the multitude of voices, interests, and functional requirements, which were often in opposition to one another. For example, the needs of people and plants are quite different from one another, and the wants of a retail marketplace are often at odds with those of a great garden. Together with our colleagues, we developed a relationship where every player had a significant role, and together we aimed to strike a balance in our creation. One example of this collaboration came in the shaping of the overall building form. In working with our geometry experts and engineers, we found that every millimeter of curvature change in the roof would affect the depth of all of its steel elements, which in turn would create more shadows in the garden, limiting the quantities of daylight nourishing the plantings below. This would change the planting palette altogether. No one project discipline was free from affecting another. The climate-controlled garden required significant research and analysis. This newest generation of glasshouse provides optimal comfort and daylight while minimizing energy consumption through building envelope optimization, air movement, air-conditioning, energy recovery systems, and renewable energy.

Designed using the very latest in digital modeling, the team was able to predict with high degree of certainty how its spaces would perform under all conditions, allowing and modulating generous gifts of light, air, and openness. The waterfall feature, too, was intimately connected with other aspects of the building. Its mist created a microclimate that could impact the cooling systems, so its water flows were carefully tuned by all team members to minimize splash and noise. Visits to its heroically sized full-scale mock-ups were attended not only by architects and engineers, but acoustic experts, climate specialists, and artists. One more example of our team’s unique collaboration was the Changi Airport Skytrain, which traverses the site and moves through the building. While the original design included a large glass tube enclosure, separating interior cooled spaces from exterior, we realized that this would split the garden in two. It took the cooperation of the entire team to develop a solution: automated door systems at each entry that would act as air locks, the first of their kind.

Too often, a building falls short of matching the illustrations that depict its concept design. Today, one of the greatest compliments we receive is when people look at a photo of the building and cannot decipher whether it is real or a fantasy. In Jewel many voices have created a public space like no other in the world. This vision – an airport facility as a place of community and a social interface between locals and tourists – is something new and unusual. It is a building type that, in many ways, needed to be invented. Jewel has become a destination in itself, enhancing Singapore’s tourism and Changi’s appeal as one of the world’s leading air hubs. Offering an interwoven experience of people, nature and commerce — it forges a new concept of the airport typology that is integral to city life and connected to the city center by transit.