The new San Francisco station has a rooftop park

An elevated park that is actually a multi-modal transit center. Salesforce Transit Center is a transportation hub that transforms urban experiences.

The old Transbay District became encircled by a large, elevated ramp that led from the Bay Bridge to the original 1939 Transbay Bus Terminal.

Left, the station will serve as a future rail terminus for the Caltrain commuter rail and California High Speed Rail connecting San Francisco to Los Angeles. Above, Air/ventilation systems are designed to take advantage of the city climate by using cool night-time outside air to reduce daytime cooling needs. Below, greywater and stormwater reuse will save more than 12 million gallons of potable water annually.

The old Transbay District became encircled by a large, elevated ramp that led from the Bay Bridge to the original 1939 Transbay Bus Terminal.

Left, the station will serve as a future rail terminus for the Caltrain commuter rail and California High Speed Rail connecting San Francisco to Los Angeles. Above, Air/ventilation systems are designed to take advantage of the city climate by using cool night-time outside air to reduce daytime cooling needs. Below, greywater and stormwater reuse will save more than 12 million gallons of potable water annually. 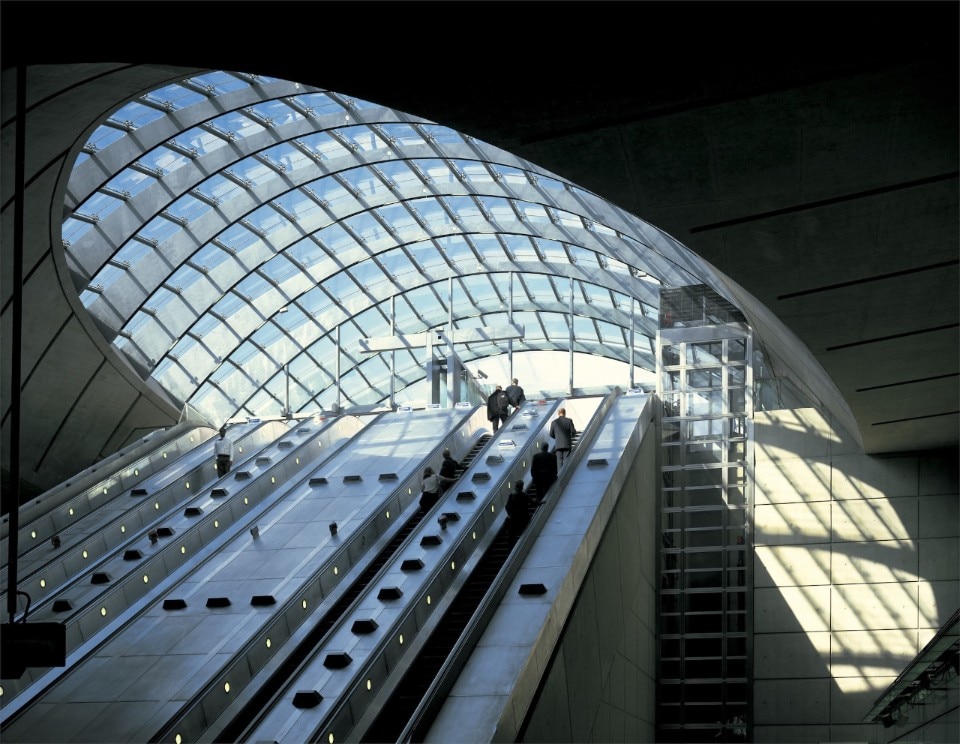 This article was originally published on DomusAir n.4, April 2022.

Salesforce Transit Center sets a new paradigm for urban design in the United States. Located in San Francisco’s Transbay District, the new transit center illustrates how a dense, downtown, transit-based development can provide a sustainable alternative to a suburban, car-focused lifestyle. The transit center was developed to consolidate operations of 11 bus systems in the Bay Area and to serve as a future rail terminus for the Caltrain commuter rail and California High Speed Rail connecting San Francisco to Los Angeles. Anticipated to serve over 45 million people annually, the transit center has become a transportation hub and catalyst for a new, vibrant, built-out Financial District in a once underdeveloped neighborhood in the city.

The old Transbay District became encircled by a large, elevated ramp that led from the Bay Bridge to the original 1939 Transbay Bus Terminal. The ramp enclosed the transit center from the surrounding blocks and stifled neighborhood growth. Its removal in 2010, before construction of the transit center, gave the design team an opportunity to reinvent and restore the neighborhood into a vibrant, mixed-use one.

At its essence, the 1.5 million square feet facility is a large-scale piece of infrastructure designed to accommodate multiple transportation modes. Humanizing infrastructure became the critical design challenge to create a functional yet visually appealing cornerstone for community building and socio- economic development. Given the complexity of the site and scale of the project, the design team provided solutions that demonstrated ways that large-scale infrastructure projects can be humanized, making it open, friendly, supportive of the public realm, and welcoming to a range of people and interests.

Turning the problem on its head

The project brief called for a long horizonal facility spanning four city blocks that would spur vertical development. The design team immediately realized that adjacent towers would focus attention squarely on the roof of the transit facility. Asking how the roof could become more than a mechanical penthouse, led the design team to propose a green roof that soon became the park design seen today. The approach transformed the facility from a terminal for arrival and departure into a community resource that would become a destination and amenity for local workers and residences.

The new 5.4-acre rooftop park, now known as Salesforce Park, extends a hallmark of San Francisco’s historic neighborhoods, which grew up around public parks, downtown. Accessible from eleven entry points, the park provides public green space to the tenants of adjacent buildings and the citizens and visitors of the city. Through extensive programming that includes a children’s playground, cafes, an 800-seat outdoor theater, and extensive local vegetation that frames the 1.5 walking trail on the parameter of the park, Salesforce Park is a hub of activity in the heart of the new Transbay District. Woven into the landscape of the park are amenities to serve the public and quiet areas for reading, picnicking or simply taking a break with botanical gardens, and free public art with installations by renowned artists Ned Khan and Jenny Holzer.

A multi-modal transit center, by its nature, has an environmental impact on its surroundings. It is a concentrated source of exhaust from cars, buses, and trains, and due to its 24-hour-a-day activity, it uses resources and generates pollution at a rate much greater than other buildings. At a minimum, there is an ethical obligation to reduce the environmental effects of Salesforce Transit Center on the neighborhood. The rooftop park became an opportunity for carbon capture and natural air filtering through broad leafed vegetation. Instead of a massive roof absorbing and radiating heat, the 5.4-acre rooftop park absorbs carbon dioxide from bus exhaust, filters stormwater, and provides a habitat for local wildlife. With more than 600 trees and 16,000 plants, the ecosystem will capture 12 tons of carbon annually.

San Francisco is known for its vibrant culture and mathematical and technical prowess from its numerous elite institutions of higher education and its designation as Silicon Valley, a global center for technology and innovation. It was important for the design team to balance the building’s large massing that spans four city blocks while reflecting the innovative culture of the city. The design team endorsed the solution to use the “Penrose Tiling” by the famed mathematical physicist Sir Roger Penrose. The architectural effect of the perforated metal panels that reflect the Penrose pattern is one of diffuse complexity— a surface that has an immediacy that rewards more careful viewing. There is a welcoming softness to the building’s surface that captures its visionary approach and contributes gracefully to the city’s architectural language.

Salesforce Transit Center anticipates the future of transportation and urban development. As a fully electrified project, the transit center recognizes that connectivity and sustainability are essential building blocks for increased economic development and cultural vibrancy in twenty-first century cities. Phase Two of the project will see a 1.3-mile Downtown Rail Extension that will bring Caltrain commuter rail from its current terminus at Fourth and King Streets and, ultimately, welcome California’s High-Speed Rail.