The winner of the seventh Bruno Zevi prize, the book focuses on a narrow aspect of the work of Pier Luigi Nervi – large roofing systems, which are described as the engineer’s obsession. 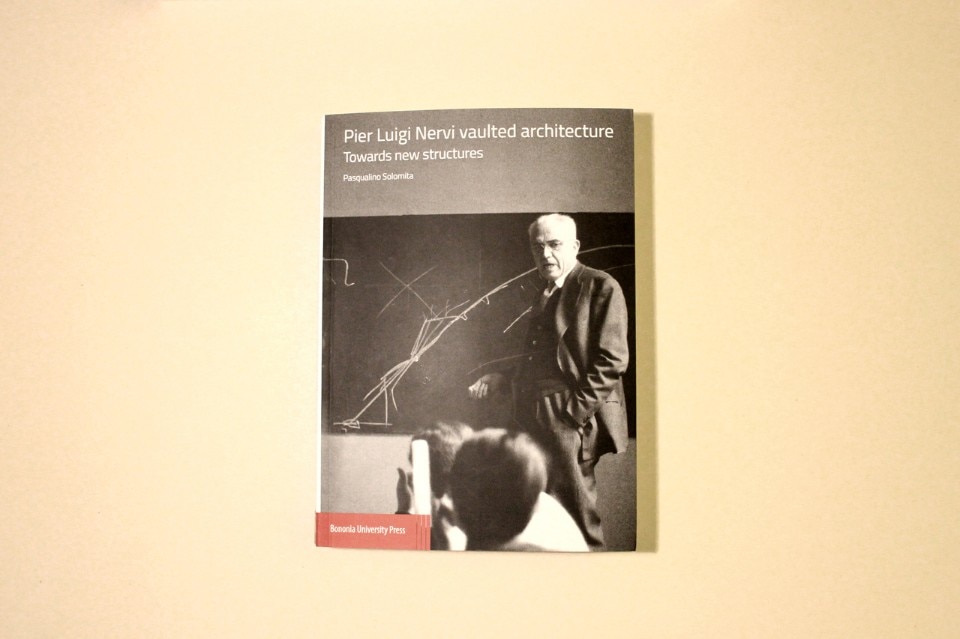 Pasqualino Solomita, an architect who also holds a PhD, turns his attention to a narrow aspect of the work of Pier Luigi Nervi – large roofing systems, which are described as the engineer’s obsession.
The work covers the steps Nervi took towards his dream of creating the largest dome in the world, which he achieved only on paper with his designs for the Richmond Hippodrome (1960–1961) and the Kuwait Sports Centre (1968).

The work, the winner of the seventh Bruno Zevi prize, has been published by Bononia University Press almost two years after the award in an enlarged edition with additional plates. Solomita presents Nervi as inspired by Gothic architecture and by the expressive honesty that he saw as enhancing its structural system. He appears frequently in his own words, which Solomita has gathered through diligent research into books, magazines and archives. This is a Nervi who was a master of systems of construction, which he himself invented, but also as someone perhaps less interested in or ready to work with materials dissimilar to concrete, such as aluminium.

The author sets aside an early section of the book to describe the global research panorama of the time, which saw in the modelling of form and the optimisation of the section the most cost-effective, functional and expressive responses to the architectural needs of the twentieth century. This focus, and the comparison with engineers outside Italy carrying out similar experiments at the same time, contextualises Nervi and helps us understand him better.

The Italian engineer is known around the world as one of the masters of ferro and reinforced concrete, materials that he studied during the period of autarchic restrictions in Mussolini’s Italy; he later experimented with them in his first roof for agricultural machinery in Torre in Pietra, in 1945. It was a sort of zero point for all the variations on the theme of the dome and vault that he would go on to create in later years. The book follows this journey – a crescendo of covered surfaces – in roughly chronological order. Solomita describes in meticulous detail the ways in which Nervi put his theories of construction into practice. He compares the different solutions used and demonstrates how their expressive value was the product of the laws of statics. As the engineer himself wrote in Casabella-Continuità in 1959: “The best architectural solutions are almost always those that interpret the frameworks of statics more accurately.”
But after close examination of different projects, including the Palazzo dello Sport in Rome (1958–1960) and the Cultural and Convention Center in Norfolk, Virginia (1965–1971), created in ferro-concrete and with an open roof 100 metres in width, the book discusses the huge metallic structures that would make it possible to triple the sizes attained. It is a field that takes us away from the Nervi who is better known; its first appearance comes in a preliminary study that the largest aluminium-producing company of the time, the Reynolds Metals Company, commissioned him to carry out. Nervi’s proposed vault was a 400-metre parabolic arc 80 metres in height which would have covered the Richmond hippodrome in Virginia. Solomita sees this first approach, sketched on paper with diagrams and calculations, as a fundamental step towards the development of the later design proposed for the Kuwait Sports Centre (1968).
His competition entry was a planimetric scheme divided into four with a symmetrical double axis, at the centre of which the stadium roof, a metal dome 300 metres in width, was positioned. An enormous transparent bubble, generating the whole planimetric system, was covered with plastic, which let light pass through in winter but was shaded by a system darkening it in summer. The roofing system he designed, as said, was not made from ferro-concrete but used technologies derived from aerospace experiments and was based on a prefabricated system of hinged metal beams far removed from the classical technologies used by Nervi. There were many unusual aspects to this design; the author clarifies them by bringing in direct testimony that reconstructs, in part, the phases of the work. This careful research leaves unclear the engineer’s real conviction in abandoning the paths he had traced to follow ones more suited to the times. It was a period, as Solomita rightly notes, pervaded with the innovative theories of Archigram and Buckminster Fuller’s geodetic structures, which clearly fascinated the youngest members at least of Studio Nervi.
Nervi’s entry did not, in the end, convince the jury. It remained one of a long line of attempts by Nervi to cover ever-larger surfaces and to extend his own capacities towards ever further limits. It was an ambition left unrealised in concrete numbers but one which was definitely reached in the elegance and the formal qualities of his vaulted architecture.
© all rights reserved