The hefty volume by Matt Zoller Seitz is a semi-serious thesis structured in three acts, each of which unfolds around a long, in-depth interview with the film-maker Wes Anderson. 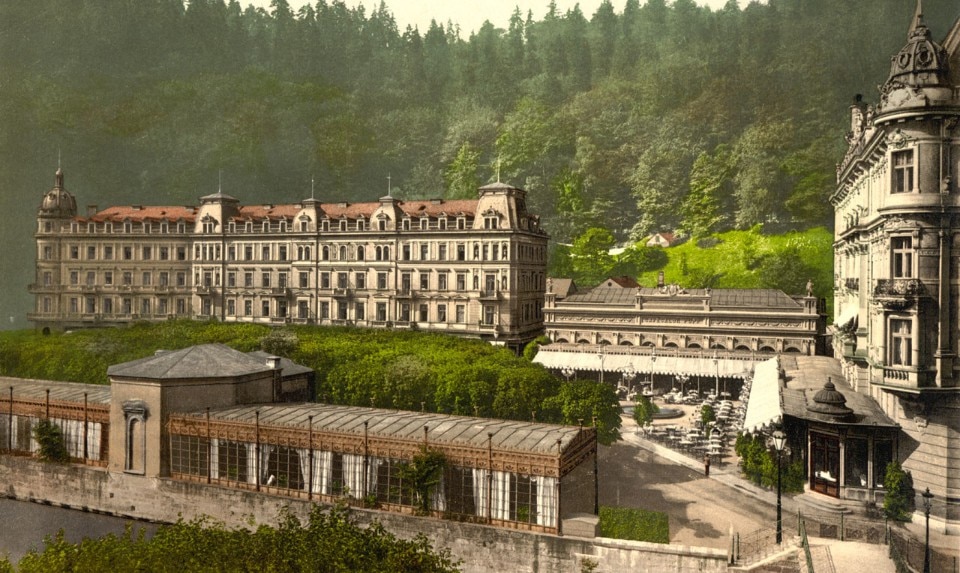 “The Grand Budapest Hotel, it’s a twelve-layer wedding cake of a film” says Matt Zoller Seitz at the beginning of his eponymous monograph on the eighth film by Wes Anderson – winner of four Oscars – published in the United States last February. The author, writer, editor-in-chief of RogerEbert.com and New York Magazine’s TV critic also authored the previous The Wes Anderson Collection, published by Abrams in 2013. He continues by explaining the paragon with fine baking in the book’s preface. “As you are devoring a twelve-layer wedding cake, you don’t necessarily think about all the work that went into it –, only that it’s delicious.” This also happens with Wes Anderson films and maybe with this book, too. You can eat a slice of it or even two, you may simply look at it or not want any. The fact is that the form and content of this book will satisfy all appetites.

The happiest of all will be Wes Anderson fans because the hefty volume, large and running to roughly 300 pages, is a semi-serious thesis structured in three acts, each of which unfolds around a long, in-depth interview with the film-maker. Colours and graphic design are true Wes Anderson style, of course, complete with previously unpublished photographs taken during filming, plus pages from the screenplay, sketches of the sequences, storyboards, analysis and essays by leading writers and critics, miniatures and models of sets, and illustrations by Max Dalton, a graphic artist who lives in Buenos Aires, Barcelona, New York and Paris.

The book contains curious pictures of early 20th-century postcards that inspired the American film director and are conserved in the PhotoChrome Print Collection of the Library of Congress. The collection contains more than 6,000 vedutas of Europe, b/w photographs later coloured immortalising luxury and top-class hotels that have disappeared, are rundown or have been totally refurbished.

The Grand Budapest Hotel is, of course, a best seller and offers in-depth insight into the incredible Wes Anderson microcosm, probing his universe and its literary, visual and cinematographic influences. From a chapter on Stefan Zweig, a Viennese author who committed suicide and inspired the director to write the screenplay, to notes on the Kubrick déjà vu in the carpets of the most famous corridor in cinema history – that of the Overlook Hotel featured in Shining. There is also room for the technical expedients that have made Wes Anderson not just a film director but a highly distinctive film-making style, with analysis of his painstaking attention to the shots and details, the geometry of the scene and the set architecture, passing via the film’s costumes. The interviews also contain a premonition. The director’s answers in the first interview “An idea of Europe??” hark back to the very concept of Europe, especially in light of recent events in Greece. The film is set in an unreal Europe that has lost its way and is tinged with nostalgia, a place where everything is finished and where the fictitious remains, from Mendl’s cakes to the Republic of Zubrowka where the story unfolds; but you wonder whether it is not perhaps today’s Europe that is fake and lacking in content.

A substantial section of the book focuses on the costumes and is packed with sketches and models. It begins with an interview with Christopher Laverty, a consultant and costume designer on the film, as well as being the author of the hugely popular Clothes on film blog and who is currently working on a book on film fashion. The focus is on the clothes that play a key role in Wes Anderson films. Just think of the velvet cloak and gold Klimt-style dress worn by Tilda Swinton as Madame D, its fabric and designs epitomising a world of riches, parties, champagne, paintings and foie gras.

The sketch of that dress is the starting point of a remarkable interview with Milena Canonero, the famous costume designer from Turin who, after training in Genoa and London, found herself in Hollywood winning well-earned Oscars for the fabulous costumes of A Clockwork Orange – the droogs’ uniform becoming truly iconic - Barry Lyndon and Shining. She has worked with all the big names, Hudson, Coppola father and daughter, Louis Malle, Polanski and, lately, Wes Anderson, on The Life Aquatic with Steve Zissou, The Darjeeling Ltd and The Grand Budapest Hotel. “Wes is particular about details, and so am I.” says the Italian costume designer when interviewed about the film “He is very specific, and yet he also leaves you lots of space. He wants input and ideas. The look of the characters, when not specified in the script, evolved over the course of much discussion. I work closely with the production designer and the cinematographer, so that everything comes together as a whole- especially in the overall color palette of the movie. Colors have their own music, and Wes cares a lot that they are the right notes”.
Adam Stockhausen, production designer of films such as Synecdoche, New York and 12 Years a Slave speaks about production design “You are creating everything, because you are dealing with a fictional world. So you end up designing the movies frame by frame, shot by shot, through each sequence. Wes’s films are very similar to that because although they are tied into reality, it’s all created.” – including the coins, the banknotes, the perfume bottles and the perfect pink boxes in Mendl’s bakery, repeatedly designed and redesigned by a design team.

To end, we shall say that the book has achieved its objective, as intended by author Matt Zoller Seitz. It possesses the same sense of architecture as the memorable films that inspired it. It is a multilayered book with painstaking detail that is a pleasure to enter into, just like Wes Anderson’s films.