In the Critical Spatial Practice book series, editors Nikolaus Hirsch and Markus Miessen construct a larger discursive foundation about how space can be interpreted as a political medium within which action can take place. 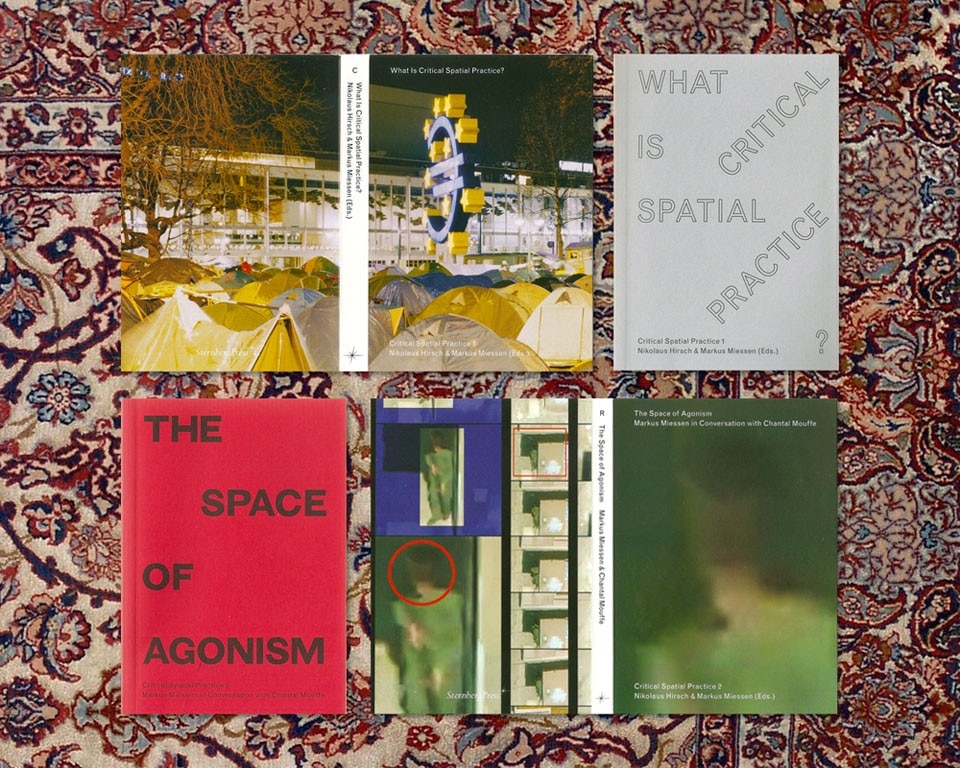 A mainstream public discourse of apprehension and reconciliation has emerged over the past ten years, as architects have begun to rediscover the inherent power of creating space. In this spirit, the Critical Spatial Practice book series, edited by Nikolaus Hirsch and Markus Miessen, takes as a historical starting point the post-financial crisis social movements and seeks to uncover a deeper affinity and significance underlying the recent compulsion to “be political”. The series follows on Miessen’s trilogy on Participation, and accompanies his recently initiated Architecture and Critical Spatial Practice program at the Städelschule, Staatliche Hochschule für Bildende Künste, Frankfurt. Critical Spatial Practice attempts to understand how creators of space can act as active political agents, and how space can facilitate political agency itself. Tactfully avoiding a preemptive answer to such broad issues, the editors construct a larger discursive foundation about how space can be interpreted as a political medium within which action can take place.

Framing such actions within the concept of “criticality”, this political and spatial discourse is given a subversive and resistive connotation. What is Critical Spatial Practice?, the first book in the series, interviews over 60 architects, historians, curators, philosophers, writers, and artists, asking “what, today, can be understood as a critical modality of spatial practice?”.

It immediately becomes apparent that not only is criticality itself not dead, it has possibly never been so alive

It immediately becomes apparent that not only is criticality itself not dead, it has possibly never been so alive. The wide gamut of opinions and interpretations on the contemporary significance of what it means to be critical today shares a discursive commonality: they textually perform the political itself. No intervention exceeds three pages, and each one acts as a mini-manifesto, with candid declarations and clear strategies for political praxis.

The second book in the series, titled The Space of Agonism, is a (re)presentation of a series of conversations between Miessen and political philosopher Chantal Mouffe, which took place sporadically between 2006 and 2011. Agonism is a political and ontological model based on the fundamental ineradicability of conflict, but insists on the contingent relationship between conflict and violence: hence agonism, a subtraction of antagonism, and the notion of “conflictual consensus” [1]. While this model is only one of many, the authors enact the political by specifically choosing to develop further this one. Furthermore, as if proof were necessary (or possible), they claim: “reflecting on recent history, it seems that the views put forward in the conversation are being confirmed by reality”.

While the first book ‘s structure produces a more polemic, scattered, and therefore fragile discourse, the second book wields the solidarity of one specific discourse as a lens through which to see, speak, reflect, understand, and generate constructive ideas about the contemporary global historical moment. The discursive format of each book in relation to each other reflects a larger trend in contemporary historical discourse and its social repercussions. Despite the fact that Mouffe’s theory of agonism is based on the “shared symbolic space” of pluralism itself, the relationship between the plurality of views expressed concisely in the first volume and the comprehensive, yet privileged view explored in the second goes unmentioned, making the contrast between these two interpretations of the politics of space rather stark.

More than just a small and portable set of provocations, by creating books that physically represent the central concept they are trying to discuss, the Critical Spatial Practice series transcends compulsion, offering instead a reflective performance of the political. Nick Axel (@alucidwake)