Two new publications offer a detailed snapshot of the bicycle’s cultural, technological and aesthetic evolution over recent years in relation to urban space. 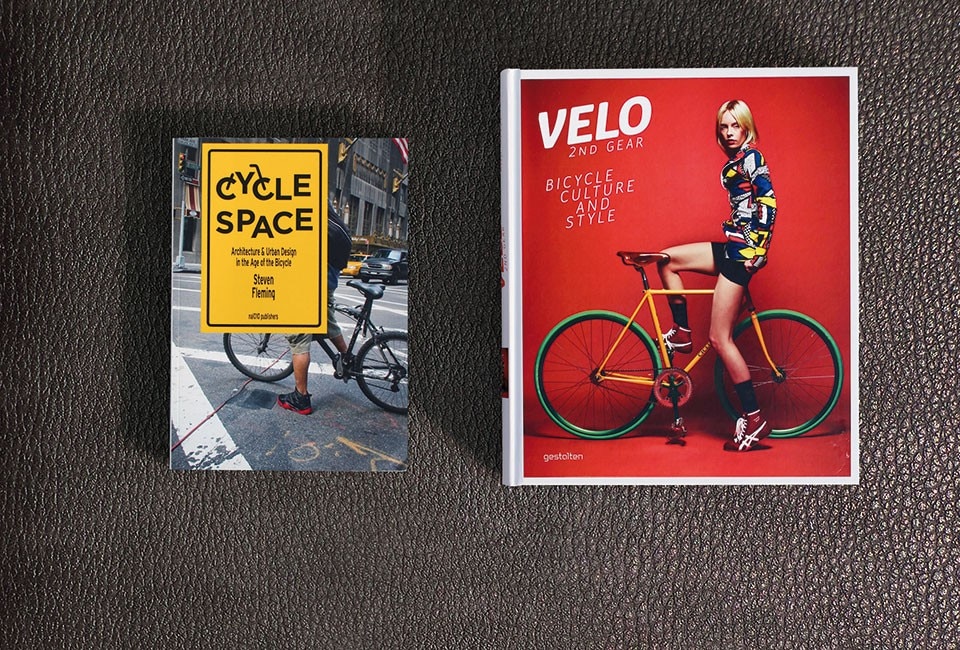 The expression “It’s like riding a bike” is probably as old as the two-wheeled vehicle itself, and it describes how certain previously learnt skills are difficult to forget. With this in mind, Steven Fleming, professor of architecture at the University of Tasmania and a life-long cyclist, seeks to convey how easy it would be to revive the wisdom that existed in societies prior to the battle for personal mobility between the car and the bicycle. His book Cycle Space: Architecture & Urban Design in the Age of the Bicycle delves into the concept of “cycle space” — or “the organising system an individual cyclist projects upon his or her city” — and how the post-industrial city is quite accidentally full of it. Fleming discusses how contemporary architecture and urban economics have created a new kind of cityscape made up of large-scale architecture with extensive pedestrian areas, which are far too large to travel around on foot, but excellent when experienced at the speed of a bicycle. In the book, brownfields are closely examined for their inherent bike-friendliness, and unconventional bicycle legislation is considered as a safer alternative to the cumbersome helmet laws that dissuade most common travellers from riding on two wheels.

Readers are offered plenty of food for thought thanks to the book’s persuasive structure, which is divided into chapters that discuss the societal, legislative and economic reasons underlying our current collective hesitation to pick up the bicycle as a habitual means of transport. From Amsterdam’s Central Station to Portland’s cycleways, from Copenhagen’s style to Paris’s theatrics, Fleming illustrates the subtleties that each context adds to the act of cycling, while also adopting a critical stance by reviewing strategies employed by different municipalities: urban renewal, cycling infrastructures, and formal and informal bike routes. In this sense, Cycle Space constructs a perfect argument for the ubiquitous return of the bicycle in everyday life and in all classes of society.
On the other hand, Velo—2nd Gear: Bicycle Culture and Style, edited by Sven Ehmann and Robert Klanten, acts more as an index of customised fixed gears, Dutch inventions, avant-garde engineering, designer saddles, old-time racers and many other creations and bike components, ranging from the open design of Tristan Kopp’s PRODUSER to the extravagant carbonfibre bicycles of PG-Bikes. The book uses photography as its main tool to bring the reader into the workshops and showrooms of frame builders and bike designers, providing a visual snapshot of contemporary biking culture.

Amid the plethora of photogenic bicycles, the book also explores the spaces and philosophies of a number of studios, such as BIKEID, where customisation is king and “every bike that leaves the production line is actually a collaboration between BIKEID and the new owner of the bike”, and inventive designs like the Invisible Bicycle Helmet Hövding, which provides a safer, airbag-like contraption that inflates when it senses a sudden movement, effectively saving your life and your hairstyle from hat hair. Velo—2nd Gear manages to bring together samples and elements from a wide spectrum of bicycle designs, accessories and related cultural relics, and in doing so it outlines the bicycle’s variety and depth as a centre of lifestyle and a primary expression of identity. With its straightforward organisation and aesthetic presentation, this book is an accessible and enjoyable overview of increasingly bike-centric creativity from around the world.

The books reviewed here are but two drops in the ocean of publications produced in recent years that focus on the bicycle, clearly indicating the resilience and vitality of today’s biking culture worldwide. Nonetheless, taken together, they paint a comprehensive picture of the bike’s evolution in recent years, be it cultural, technological or aesthetic, without hiding behind superficial alarmism or clichéd concepts of sustainability. Instead, they build on the examination of cultural contexts and current trends to foresee what could, and should come with the millennial rebirth of the two-wheeler. Elian Stefa (@elianstefa)