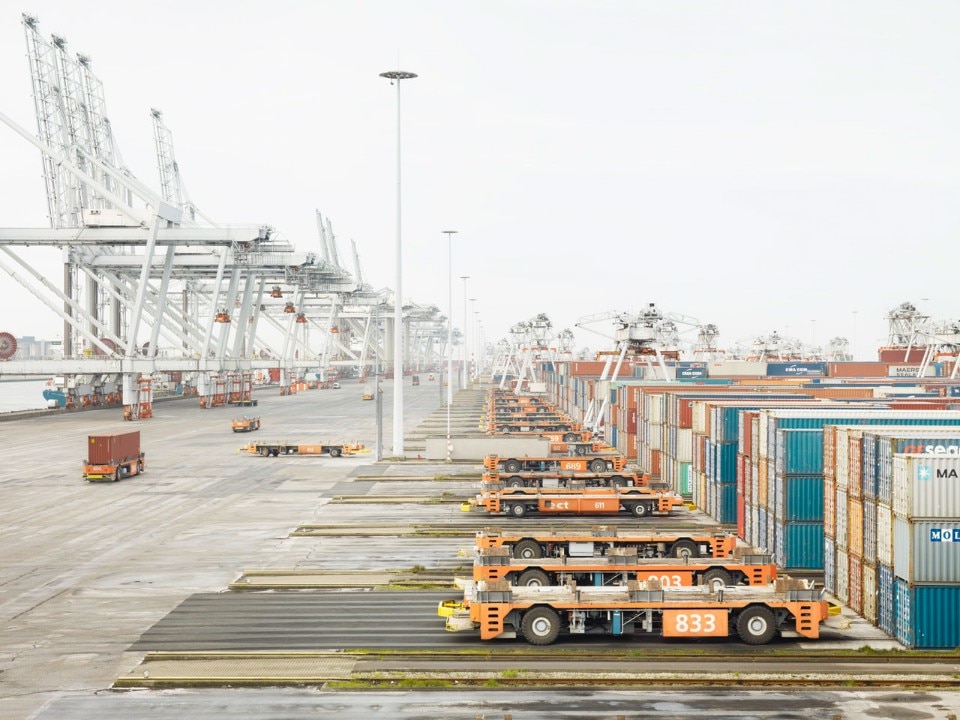 Share
Never before have commodities been shifted so fast and so far around the world as they are being today. A T-shirt from Taiwan, felt slippers from Tyrol, wine from Australia – ordered today and delivered to your door tomorrow. Even the individual ingredients for a tub of strawberry yoghurt, when taken together, have already covered several thousand kilometres before landing on the refrigerated shelf of a local supermarket.

How is this possible? What infrastructure does it require? Henrik Spohler’s most recent project takes us into that difficult-to-access intermediate realm of logistics where commodities are transhipped at an ever increasing speed: the freight areas of airports, the labyrinths of railway tracks in large shunting yards, the warehouses of international haulage contractors, the container terminals of sea ports.

Photographed in six different countries, these special zones, streamlined for ruthless efficiency, develop an aesthtic of their very own that oscillates between clear structure, an almost meditative monotony and a gigantism the sheer dimensions of which often go beyond man’s powers of imagination. In these places, all individuality has been rationalised away; it is scarcely possible to say whether the scenario is in Europe or Asia. Here, consumer society has created itself a seemingly fictional nameless realm of pure functionality.
Text taken from Thomas Assheuer, Henrik Spohler In Between, Hartmann Books, 128 pages

Henrik Spohler, born 1965, studied at Folkwang School in Essen, has been working as a freelance photographer in Hamburg since 1993 and teaches as a professor at the Berlin School of Technology and Economics. Spohler’s work is found in important collections, both public and private. The book to the series In Between has been published by Hartmann project.

His series In Between is on show at the Robert Morat Galerie in Berlin, until 11 March 2017.