As far as the eye can see

The Iranian photographer Jalal Sepehr recounts, through different series, the sufferings and continuos alarm of the Middle Eastern populations due to wars and emigration. 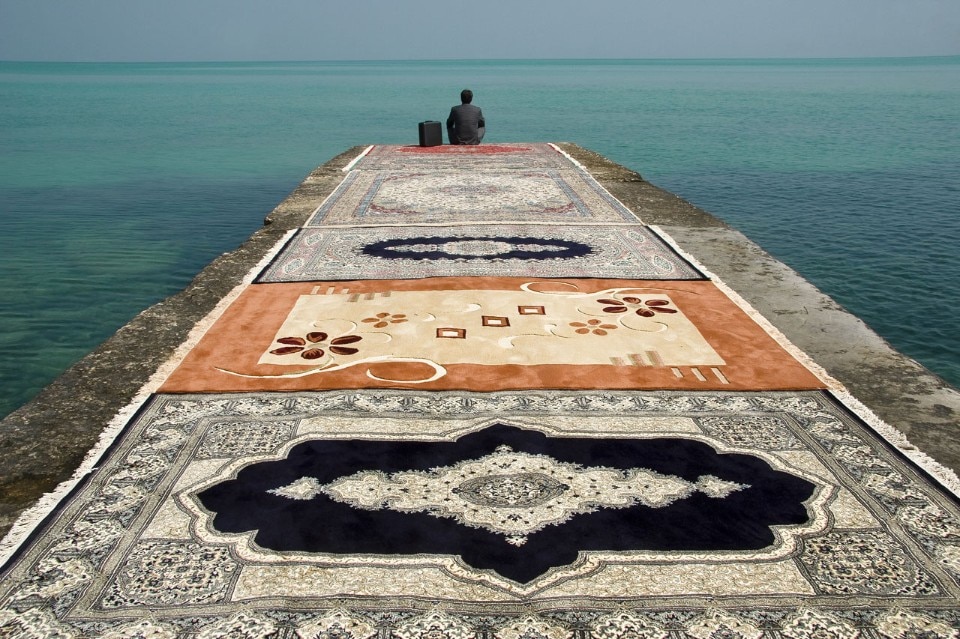 Share
The recent series Red Zone (2013–2015), a project that stands out for its almost lacerating intensity, revealing the intimate dimension of a community – not specifically Iranian, but Middle Eastern in general – forced to live in a constant state of alarm, in a red zone precisely, where threat and danger are the only faithful companions.

On a long walkway made of beautiful Persian carpets, a huge boulder fallen from the sky, or a fierce sandstorm, or a plane that has just taken flight, appear regularly to obstruct the passage, making any escape route difficult.

The carpet returns as a central element also in the surreal setting of Water and Persian Rugs, of 2004, becoming instead an imaginary bridge between past and present, a magnetic slippery surface that you are forced to cross if you really want to be a protagonist of your own time, without having too much fear of the unexpected. Next is the evocative series Knot of 2011 and the work Girl and the Mirror of 2010, both realised between the walls and the characteristic clay domes of the beautiful ancient city of Yazd, in central Iran. Finally, the exhibition closes with Sepehr's latest photographic project, Color As Gray (2014-2016), which with elegant fragility questions the dramatic reality of the war, now an everyday element in many Middle Eastern countries. A sad testament to how the wounds of these conflicts never really heal. Sepher’s work, curated by Silvia Cirielli, is on show until 9 July at Officine dell’Immagine in Milan.

Jalal Sepehr was born in Teheran (Iran) in 1968, where he currently lives and works. He took up photography in 1995, learning as an autodidact. After three years of experience in Japan, Sepehr returned to Iran, where he founded the site Fanoos Photo with the photographer Dariush Kiani. He has taken part in numerous international exhibitions and festivals, such as Pulso Iraniano at the Oi Futuro in Rio de Janeiro (2011); The PX3 Festival (France), the Peking Art Photography Festival (China), the Australian Photography Festival in Sydney (2014) or the International Photo Festival in Belgium (2009).
Share