When circles are scales: notes on the new “small”

Lucia Allais reflects on the reappearance of the circle as a spatial ordering device in architecture, as well as our heightened consciousness of the perimeter around our bodies. From Domus November issue. 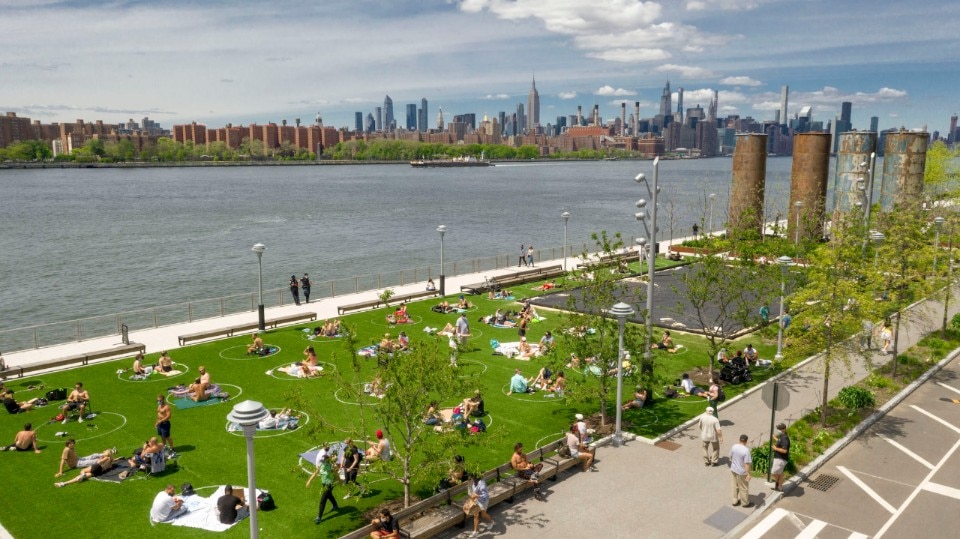 This article was originally published in Domus 1050, November 2020.

The current pandemic has not, as many commentators have pointed out, forced a whole new social order on the world. Rather, it has exacerbated existing inequities, accelerated some changes while slowing down others, and made manifest many latent, or hidden, aspects of contemporary life. For architectural observers, one of the more puzzling of these phenomena has been the sudden reappearance of the circle, as a spatial ordering device, in the built environment.

As soon as staying two metres (or six feet) apart became a global norm for avoiding transmission of the virus, images of cities dotted with graphic circles began to proliferate. In Brooklyn (USA), where I live, the white perimeters that were painted on a patch of synthetic grass made the Domino Park instantly famous, as if Charles and Ray Eames’s 1977 The Powers of Ten had been annotated with a circular stamp.

Everywhere, architects found themselves designing with six-foot diameters as they were hired to retrofit the plans of offices, institutions and public spaces. Prosthetic circles have also appeared: in Rome one man wore a cardboard disk around his waist to the market of Testaccio; in Germany street vendors sold hats affixed with cruciform foam spokes; and in the USA “bumper tables” edged by rubber tubes were designed for drunk patrons in open-air bars.

This sudden visibility and physicality of the circle has dramatically reinscribed the human scale in the built environment. But we should be cautious not to see in this a return of Renaissance humanist principles which placed the body and its proportions at the centre of all architecture. When Leon Battista Alberti called the circle “the most perfect geometry” in 1452, setting in motion a centuries-long competition over who could best diagram how the human figure fits, arms extended, into a circle and a square, it was in order to demonstrate that one design system could be extended isotropically outwards, from a small circle to infinity. In contrast, the pandemic circle is not outward-looking but protective, not figural but empty. It may delimit a place, but in no way guarantees the homogeneity of space.

The circle has been instrumental in giving a new legitimacy to the small project as a site for formal exploration that is possibly far-reaching, because it is designed not “to a scale” but as a scale

Nor can we say that these ubiquitous circles are a revival of the anthropocentrism of mid-20th-century architects who wanted to “humanise” modernism. When Aldo van Eyck inscribed a circular perimeter in the concrete floor of the municipal orphanage he designed in 1959, encircling the pilotis he had carefully placed at the entrance of each unit, it was in order to create a space of indeterminacy, to show that not everything in architecture can fit in a cellular grid. In contrast, today’s six-foot diameters don’t offer any centring, much less a phenomenology. It is the space between circles that is indeterminate. Witness the orderly randomness that occurs when the two-metre requirement is articulated not as perimeters but as a grid of points – when we arrive in a public space and encounter those adhesive dots telling us to “please stand here”, or “do not sit in this seat”. While this point-based approach implies an infinite extension, in fact its job is to immobilise us, to congeal space. This is why we are so tempted not to stand right there, but to circle the dot, to move off it, if just a little. The circular space of social distance does not proliferate; it locates and alienates at the same time.

The phrase “social distance” was coined by the German sociologist Georg Simmel in 1908, to describe an urban estrangement that was both spatial and psychological. He used it to theorise individual social types, such as “the stranger”, but by the 1930s this typology had been made collective, by Chicago School sociologists, who invented a social model of urban expansion which was graphically represented as concentric circles at the scale of the city. Alienation and other urban phenomena, they argued, spread concentrically across neighbourhoods, from centre to periphery. Today, no such concentric mobility is available to the human – it is the virus that spreads and moves, whereas we stay in our circles or pods, barely close enough to form a social aggregate.

What is the difference, then, between the circle as a form that generates rules and propagates them outwards from a central body or self, and the circle as an enclave in which a person may find herself maximally protected? The answer is that all these pandemic circles are a kind of scale – not in the abstract sense of an absolute measure of space, but in the physical sense of a tool, an instrument of the kind owned by the architect, which travels with bodies and helps adequate for their smallness in the world.

It is all the more intriguing, then, that the circle had already been making an architectural comeback in the last 15 years, as a spatial and visual trope in smalland medium-scaled projects built by architects of the international avant-garde. Diminutive, usually high-end, and often built for temporary display rather than permanent inhabitation, these projects also used the circle as a marker of smallness, but to entirely different ends.

In New York, the proliferation of circles has reminded many observers of the circles that were proposed as part of the Young Architects Program (YAP) at MoMA PS1. In this otherwise characterless site, designing a pavilion around a circle became a way to organise space since at least WW’s 2005 spiral scheme. But WorkAC inaugurated a whole new era of aggregated circular schemes in 2008, when they built a cluster of sonotubes, which worked as planters and canopies. While tightly and rigorously packed, they left the space below remarkably free of spatial prescriptions. More such plans were proposed in quick succession, with circles now varying in size from small to medium, but still more or less calibrated to a handful of bodies. Over the years, the circles became chimneys (MOS), roofs (Jenny Sabin), cones (UrbanLab), oculi (Matter), stacks (The Living) and sprinklers (Andrés Jaque), and the space below was modulated in density.

This sudden visibility and physicality of the circle has dramatically reinscribed the human scale in the built environment. But there’s no return of Renaissance humanist principles

To be sure, this strategy had precedents – as in OMA’s entry to the Downsview Park competition – but they were in the realm of landscape design, where circles domesticate a site on a much larger scale. Reduced to smallness and inflected with elemental functions (water, earth, steam, sun), the circles became associated with a new architectural approach to sampling “nature”. The feat was that the forms were circular, but steered clear of the cyclical iconography, and domed architecture, usually associated with ecological design.

It seems significant that many of these projects were built by a cohort of architects who have sometimes called themselves “pragmatic”, and thus use circular geometries without attaching to them any utopian meaning. Going up in size from the pavilion to the house, we find circles that are implied rather than whole (as in Office KGDVS’s Solo House or Johnston Marklee’s View House). These designers’ proliferation of circles has certainly been facilitated by software, which makes drawing and dividing arcs so much easier. But their interest lies not in geometric complexity.

Instead, the “small circle” reveals a concern for controlling form just enough that the result can be authored but normative. Far from spectacle, this is about calibrating form just before it reaches the body, by an extension of human limbs with arcs that was first codified in ergonomics. For example, SO-IL have become experts at strategically deforming the rectilinear – whether by replacing one segment with an arc, or spanning with meshes and scrims between arcs and straight edges.

Adjusting the circle’s ambitions to “small” also has the effect of relieving its metaphysical burden and releasing a lighter, more actionable monumental potential. Höweler+Yoon and Studio &’s circular design for the UVA Memorial was inhabited this spring not by formal rituals but by spontaneous visits, such as activists who stood in a distanced crowd, bleeding out of the perimeter. Even the weighty legacy of the Enlightenment – where circles and spheres evoke cosmic forms – can be domesticated if the right size is achieved. See the enlarged circular picture-window dominating the facade of 6a Architects’s MK Gallery: on the outside the circle takes in, reflects and dominates the suburban landscape; but on the inside its geometry is unceremoniously demoted by intervening floors, windows, mullions, curtains and all.

What these recent projects show is that the circle has been instrumental in giving a new legitimacy to the small project as a site for formal exploration that is possibly far-reaching, because it is designed not “to a scale” but as a scale.

What do these bespoke experimental projects have to do with circles deployed as graphic stopgaps in a new global public health crisis? Isn’t it clear that what is experienced in one type of circle as alienation exists in the other as a kind of autonomy, or design freedom? Perhaps. But both types of circle help us think about the new scaling mechanisms that have become dominant in social and cultural life. Whether in biomedical science or in the culture industry, the new “small” is defined not formally but statistically.

The passage from small to large is no longer effected through a physical extension in homogeneous space, but rather through complex statistical transfers that don’t guarantee a one-to-one accounting. Think of the way scaling “up” happens politically and sociologically – the ways populations are counted, vaccines are distributed, opinions are polled, visual effects are smoothed, markets are predicted, and “nature” is modelled, through algorithms, in all of its unforeseeable, unpredictable, unknowable behaviour.

Circles used to be a way to create worlds. Now they are a mode of sampling the world. As such, they also depict the rise of a statistical thinking, wherein a model is not a scaled-down copy of something, but a machine for transforming something small into something vast. In this paradigm, power goes to those who “design” samples, which are fed as input. To draw a circle is not to point to the presence of a point at the centre, but to increase the probability of catching at least something inside a sample perimeter. That may well be part of the small circle’s visual appeal today: it captures not presence but probability.

Read also: Resilient manufacturing during pandemic: the case of masks and ventilators

Lucia Allais is an architectural historian and critic who writes about
the global culture industry, the history of theory, international politics, and contemporary design.